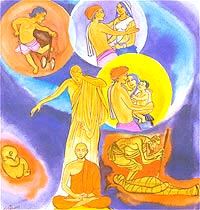 Let go before, let go the after,
let go the middle, beyond the becoming.
With mind released in every way
youâll come no more to birth, decay.

Explanation: Give up the past, give up the future, give up
the present. Having reached the end of existence, with a mind free
(of all conditioned things), you will not again undergo birth and
decay.

Verse 348: Give up the past, give up the future, give up the present. Having
reached the end of existences, with a mind freed from all (conditioned things),
you will not again undergo birth and decay.

1, 2, 3. pure, pacchato, majjhe: the reference is
to attachment to the past, future and present Khandha aggregates.

4. bhavassa paragu: one who has gane to the other shore or end of
existences (i.e., Nibbana); an arahat.

While residing at the Jetavana monastery, the Buddha uttered Verse (348) of
this book, with reference to Uggasena, a rich man’s son who fell in love with a
dancer.

Once, a wandering theatrical troupe consisting of five hundred dancers and
some acrobats came to Rajagaha and performed on the grounds of the palace of
King Bimbisara for seven days. There, a young dancer who was the daughter of an
acrobat sang and danced on top of a long bamboo pole. Uggasena, the young son of
a rich man, fell desperately in love with this dancer and his parents could not
stop him from marrying her. He married the young dancer and followed the troupe.
As he was not a dancer nor an acrobat, he was not of much use to the party. So,
as the party moved from place to place, he had to help carry boxes, to drive the
carts, etc.

In course of time, a son was born to Uggasena and his wife, the dancer. To
this child, the dancer would often sing a song which ran thus: “O you, son
of the man who keeps watch over the carts; the man who carries boxes and
bundles! O , you, son of the ignorant one who can do nothing!” Uggasena
heard the song; he knew that his wife was referring to him and he was very much
hurt and depressed. So he went to his father-in-law, the acrobat, and requested
him to teach him acrobatics. After a year’s training, Uggasena became a skilful
acrobat.

Then, Uggasena went back to Rajagaha, and it was proclaimed that Uggasena
would publicly demonstrate his skill in seven days’ time. On the seventh day, a
long pole was put up and Uggasena stood on top of it. At a signal given from
below he somersaulted seven times on the pole. At about this time, the Buddha
saw Uggasena in his vision and knew that time was ripe for Uggasena to attain
arahatship. So, he entered Rajagaha and willed that the audience should turn
their attention to him instead of applauding Uggasena for his acrobatic feats.
When Uggasena saw that he was being neglected and ignored, he just sat on top of
the pole, feeling very discontented and depressed. The Buddha then addressed
Uggasena, “Uggasena, a wise man should abandon all attachment to the
khandha aggregates and strive to gain liberation from the round of
rebirths.”

At the end of the discourse Uggasena, who was still on top of the pole,
attained arahatship. He came down and was soon admitted to the Order by the
Buddha.