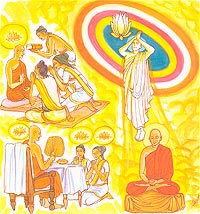 Verse 354. The Conquest Of All Suffering

Gift of Dhamma surpasses all gifts,
the Dhamma, its taste all other tastes beats,
delight in the Dhamma bests other delights,
destruction of craving conquers all ill. 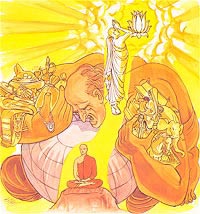 The Story of the Questions Raised by Sakka

While residing at the Jetavana monastery, the Buddha uttered Verse (354) of
this book, with reference to four questions raised by Sakka, king of the devas.

On one occasion, at a meeting of the devas in the Tavatimsa realm, four
questions were raised, but the devas failed to get the correct answers.
Eventually, Sakka took these devas to the Buddha at the Jetavana monastery.
After explaining their difficulty, Sakka presented the following four questions:

(a) Among gifts, which is the best?

(b) Among tastes, which is the best?

(c) Among delights, which is the best?

(d) Why is the eradication of craving said to
be the most excellent?

To these questions, the Buddha replied, “Oh Sakka, the Dhamma is the
noblest of all gifts, the best of all tastes and the best of all delights.
Eradication of Craving leads to the attainment of arahatship and is, therefore,
the greatest of all conquests.”

At the end of the discourse, Sakka said to the Buddha, “Venerable Sir,
if the gift of the Dhamma excels all gifts why are we not invited to share the
merit whenever gifts of the Dhamma are made? Venerable Sir! I pray that, from
now on, we may be given a share in the merit of good deeds”. Then the
Buddha asked all the bhikkhus to assemble and exhorted them to share the merit
of all their good deeds with all beings.

Since then, it has become a custom to invite all beings from the thirty-one
realms (bhumis) to come and share merit whenever a good deed is done.

Riches ruin a foolish one
but not one seeking the Further Shore,
craving for wealth a foolish one
is ruined as if ruining others.

Explanation: Wealth destroys the foolish; but it cannot destroy
those who seek the other shore (i.e. Nibbana). By his craving for
wealth the fool destroys himself, as he would destroy others.

Verse 355: Wealth destroys the foolish; but it cannot destroy those who seek
the other shore (i.e., Nibbana). By his craving for wealth the fool destroys
himself, as he would destroy others.

The Story of a Childless Rich Man

While residing at the Jetavana monastery, the Buddha uttered Verse (355) of
this book, with reference to a childless rich man.

On one occasion, King Pasenadi of Kosala came to pay homage to the Buddha. He
explained to the Buddha that he was late because earlier that day a rich man had
died in Savatthi without leaving any heirs, and so he had to confiscate all that
man’s property. Then, he proceeded to relate about the man, who, although very
rich, was very stingy. While he lived, he did not give away anything in charity.
He was reluctant to spend his money even on himself, and therefore, ate very
sparingly and wore cheap, coarse clothes only. On hearing this the Buddha told
the king and the audience about the man in a past existence. In that existence
also he was a rich man.

One day, when a paccekabuddha came and stood for alms at his house, he told
his wife to offer some thing to the paccekabuddha. His wife thought it was very
rarely that her husband gave her permission to give anything to anybody. So, she
filled up the alms-bowl with some choice food. The rich man again met the
paccekabuddha on his way home and he had a look at the alms-bowl. Seeing that
his wife had offered a substantial amount of good food, he thought, “Oh,
this bhikkhu would only have a good sleep after a good meal. It would have been
better if my servants were given such good food; at least, they would have given
me better service.” In other words, he regretted that he had asked his
wife to offer food to the paccekabuddha. This same man had a brother who also
was a rich man. His brother had an only son. Coveting his brother’s wealth, he
had killed his young nephew and had thus wrongfully inherited his brother’s
wealth on the latter’s death.

Because the man had offered alms-food to the paccekabuddha he became a rich
man in his present life; because he regretted having offered food to the
paccekabuddha he had no wish to spend anything even on himself. Because he had
killed his own nephew for the sake of his brother’s wealth he had to suffer in
niraya for seven existences. His bad kamma having come to an end he was born
into the human world but here also he had not gained any good kamma. The king
then remarked, “Venerable Sir! Even though he had lived here in the
lifetime of the Buddha himself, he had not made any offering of anything to the
Buddha or to his disciples. Indeed, he had missed a very good opportunity; he
had been very foolish.”