Vatthu-With Joy And Faith Try To Win Your Goal

BSP to rethink on continuing support to UPA


Attacking the UPA government on several fronts, BSP
supremo Mayawati on Tuesday said that her party will take a call on
Wednesday whether to continue its outside support to the Centre.

âWe will have a meeting of national executive on Wednesday to
reconsider whether to continue support to the UPA government or not,â
she said addressing BSP workers at a sankalp maharally here to mark the sixth death anniversary of party founder Kanshi Ram.

Ms.
Mayawati, whose party has 21 MPs in Lok Sabha and is giving outside
support to the government along with Samajwadi Partyâs 22 MPs, said the
next Parliamentary polls slated to be held in 2014, may be advanced and
asked her cadres to be ready for it.

âIt looks as if Lok Sabha polls could be held earlier,â she said at the well-attended rally.

She attacked the governmentâs foreign and economic
policies, saying its âanti-peopleâ decisions have added to the woes of
the people including the deprived, SC/STs, minorities and farmers.

On the issue of FDI in multi-brand retail, Mayawati left the door open on her party backing it.

âIf
the financial situation of farmers and small traders improves because
of FDI, we could welcome it in future but currently we do not support
it,â the BSP chief said. Accusing the government of âlackadaisicalâ
approach towards bringing back black money stashed away in foreign banks
and various scams, Ms. Mayawati asked her party workers to work towards
strengthening the organisation while warning them about designs of
opposition parties.

âSince the UPA government has not
done anything in the interest of the country and the people, it can go
all out to woo the electorate by luring them through tall promises which
will not really benefit the people. We have to remain vigilant on this
count as well,â she said.

The BSP chief also said no
government at the Centre has done anything for landless people in States
such as Chhattisgarh, Jharkhand and Madhya Pradesh, where SC/STs,
backwards and adivasis have been thrown out of their land.

She claimed that this has forced many to become Naxals or choose a wrong course.

Stressing
that the social condition of these landless people was akin to that of SC/STs, she asked them to unitedly strengthen her party so that they can
improve their lot.

Criticising the statement of the
Prime Minister that money does not grow on trees, Ms. Mayawati said the
Centre cannot shun its responsibilities and instead of putting the
burden on the poor and middle class, it would be better to pass some of
the burden to the capitalists.

âIt will be better to put the burden on luxury items instead on the commodities used by common people,â she said.

On
reservation in promotions, Ms. Mayawati said her party has been
fighting for it but the matter is pending in Parliament where the role
of Samajwadi Party has been âdisgracefulâ.

Addressing lakhs of her supporters at the Ambedkar Park here on the sixth
death anniversary of her mentor Kanshi Ram, Mayawati said: “I strongly
condemn the Congress government at the Centre for not declaring a day of
mourning in the country when Kanshi Ram died.”

“October 9 was declared as a state government holiday by us, but that was rescinded by the Akhilesh Yadav Government three days ago,” she added.

Mayawati, asked the Bahujan Samaj Party (BSP) party workers not to forgive the
other political outfits for the treatment meted out to late Kanshi Ram.


“We must expose their casteist mentality. He (Kanshi Ram) gave me the
entire responsibility of the movement to me - the sole inheritor of his
political legacy. I have been trying to take the movement forward in
his name,” said Mayawati.

The Samajwadi Party Government had earlier
this month cancelled the October 9 public holiday on the death
anniversary of BSP founder Kanshi Ram.

Accusing the Akhilesh
Government of worsening the law and order situation in the state,
Mayawati said that under the Samajwadi Party (SP), the state has been
turned from ‘Uttar Pradesh’ to ‘Crime Pradesh’.

“People are scared
to send out their sisters and wives even in the day due to lawlessness.
UP has become ‘Crime Pradesh’. In matters of crime, Uttar Pradesh has become number one in the country,” said Mayawati.

“Muslims
were promised reservations by the Samajwadi Party. However, SP has not
taken any steps to fulfill their promises. The Yadav community has also
been ignored,” she added.

Mayawati also blamed the Akhilesh
Yadav-led Government for breaking statues of not just her, but also of
Ambedkar, saying, “If it weren’t for Dr Ambedkar you would have seen
Mulayam Singh and family members handling the buffaloes of upper caste
persons”.

She also accused the government of changing the names of
various state welfare schemes that were launched under the name of Baba
Saheb Ambedkar and other eminent leaders.

Mayawati’s rally puts into motion her campaign for the Bahujan Samaj Party (BSP) for the 2014 Lok Sabha polls.

The
BSP, after assuming power in 2007, had notified a holiday under
Negotiable Instruments Act on Nirvan Diwas (death anniversary) of Kanshi
Ram. Another holiday - but not under Negotiable Instrument Act - was declared on Kanshi Ram’s birthday, on March 15.

For the first time after losing power in Uttar Pradesh, the BSP is all set to organise its ‘Rashtriya Sankalp Maharally’ in Lucknow on Tuesday coinciding with the death anniversary of its founder Kanshiram.


The party will utilise this opportunity to prepare ground for the 2014 Lok Sabha elections, party sources said.

The party supremo and the former state chief minister
Mayawati
during the rally is likely to set the future course of action of her
party through the rally besides making her party position clear on a
number of issues including support to the UPA government, FDI and
reservation in promotions among others.

The party have booked trains and buses to facilitate its workers to join the rally, the sources said.

Workers from Madhya Pradesh, Rajasthan, Haryana, Bihar, Punjab and Maharashtra are likely to attend the rally.

Last month, the
BSP
president had announced that the final decision on continuing her
party’s support to the UPA government will be taken at the national
executive meeting of her party after Tuesday’s rally. 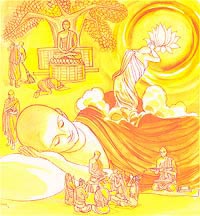 Verse 381. With Joy And Faith Try To Win Your Goal

The bhikkhu full of joy and faith,
bright in the Buddhaâs Teaching
can come to the Place of Peace,
the bliss of conditionedness ceased.

Explanation: His ecstasy is abundant. He takes delight in
the Teaching of the Buddha. Such a monk will reach the state of total
tranquillity - Nibbana - through the blissful ending of conditioning.

Verse 381: The bhikkhu who frequently feels
joy and is devoted to the Teaching of the Buddha will realize Nibbana â the
Tranquil, the Unconditioned, the Blissful.

The Story of Thera Vakkali

While residing at the Veluvana
monastery, the Buddha uttered Verse (381) of this book, with reference to Thera
Vakkali.

Vakkali was a brahmin who lived
in Savatthi. One day when he saw the Buddha going on an alms-round in the city,
he was very much impressed by the noble appearance of the Buddha. At the same
time, he felt much affection and great reverence for the Buddha and asked
permission to join the Order just to be near him. As a bhikkhu, Vakkali always
kept close to the Buddha; he did not care much about other duties of a bhikkhu
and did not at all practise concentration meditation. So, the Buddha said to
him, “Vakkali, it will be of no use to you by always keeping close to
me, looking at my face. You should practise concentration meditation; for,
indeed, only the one who sees the Dhamma sees me. One who does not see the
Dhamma does not see me. So, you must leave my presence.” When he heard
those words Vakkali felt very depressed. He left the Buddha as ordered, and
climbed the Gijjhakuta hill with the intention of committing suicide by jumping
down from the peak.

The Buddha, knowing full well the
extent of Vakkali’s grief and despondency, reflected that because of his great
sorrow and despondency Vakkali might miss the chance of attaining the Maggas.
Accordingly, he sent forth his radiance to Vakkali, made him feel his presence
and appeared as if in person to Vakkali. With the Buddha near him, Vakkali soon
forgot all his sorrow; he became cheerful and very much heartened.

To him the Buddha spoke in verse
as follows: