VatthuVerse 385. The Unfettered Person Is A Brahmana 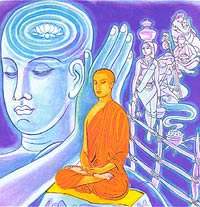 The Unfettered Person Is A Brahmana

Verse 385: Him I call a brahmana who has for
him neither this shore (i.e., the sense-bases) nor the other shore (i.e., the
sense objects), and who is undistressed and free from moral defilements1.

For a true Brahmana (i.e., arahat) there is
neither ‘this shore’ nor ‘the other shore’ which means that the senses of the
arahat are calmed, and his passions extinguished.

The Story of Mara

While residing at the Jetavana
monastery, the Buddha uttered Verse (385) of this book, with reference to Mara.

On one occasion, Mara came to the
Buddha disguised as a man and asked him, “Venerable Sir, You often say the
word ‘param’. What is the meaning of that word?” The Buddha, knowing that
it was Mara who was asking that question, chided him, “O wicked Mara!
The words ‘param’ and ‘aparam’ have nothing to do with you. ‘Param’ which means
‘the other shore’ can be reached only by the arahats who are free from moral
defilements.”