TIPITAKA from FREE ONLINE  eNÄlÄndÄ Research and Practice UNIVERSITY through http://sarvajan.ambedkar.org-Dhammapada Verse 397 Uggasenasetthiputta Vatthu-A Brahmana Is He Who Has Destroyed All Fetters
Dont call Dalits. We are Buddhists - Sandip WE WERE BUDDHISTS, WE ARE BUDDHISTS AND WE WILL CONTINUE TO BE BUDDHISTS- GREAT BUDDHIST ARATH B. BASAVALINGAPPA 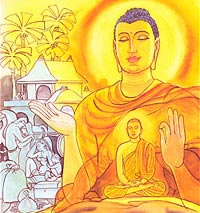 Verse 397. A Brahmana Is He Who Has Destroyed All Fetters

Who fetters all has severed
does tremble not at all,
whoâs gone beyond all bond, unyoked,
that one I call a Brahmin True.

Explanation: He has got rid of all fetters; in consequence,
he is free of trepidation and is fearless. He has travelled beyond
all bonds. Disengaged from bonds, he is no longer tied to the world.
Such a person I describe as a brahmana.

Verse 397: Him I call a brahmana, who has cut
off all fetters and is fearless, who is beyond attachment and is free from moral
defilements.

The Story of Uggasena, the Son of a Rich Man*

While residing at the Jetavana
monastery, the Buddha uttered Verse (397) of this book, with reference to
Uggasena, son of a rich man.

After marrying a dancer from a
theatrical troupe, Uggasena was trained by his father-in-law who was an acrobat,
and became very skilful in acrobatics. One day while he was demonstrating his
skill, the Buddha came on the scene. After hearing the Buddha’s teaching,
Uggasena attained arahatship while he was still performing his feats on top of a
long bamboo pole. After that, he climbed down from the pole and pleaded with the
Buddha to accept him as a bhikkhu and was accordingly admitted into the Order.

One day, when other bhikkhus
asked him whether he did not have any feeling of fear while climbing down from
such a great height (i.e., about ninety feet), he answered in the negative. The
bhikkhus took that to mean that Uggasena was claiming to have attained
arahatship even then. So, they went to the Buddha and said, “Venerable Sir!
Uggasena claims himself to be an arahat; he must be telling lies.” To them
the Buddha replied, “Bhikkhus, one who has cut off all fetters, like my
son Uggasena, has no fear.”