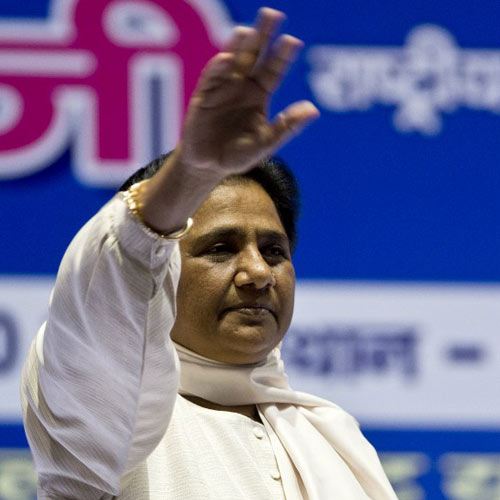 New Delhi: With assembly polls in Delhi round the corner, BSP chief
Mayawati on Friday sought to woo people who migrated from Uttar Pradesh
and Bihar to the national capital alleging that they have always been
given step motherly treatment by both Congress and BJP.

Launching the party’s poll campaign in Delhi, the former Uttar Pradesh
Chief Minister declared that the BSP would contest all the 70 seats and
would have no truck with any party.

Addressing a party workers meeting here, she announced a week-long
programme of dharna and demonstrations against the policies of the
Sheila Dikshit government.

Mayawati’s remarks wooing those who migrated from UP and Bihar is
significant given the fact that demographic profile of Delhi has
undergone a drastic change in recent years with people from the two
states forming a sizable number of the population.

She said her party would announce the list of candidates in the next 10-12 days.

“There will be no tie-up for the Delhi Assembly election. Our party will
field candidates in all the 70 seats. We will announce the candidates’
list in the next 10-12 days,” Mayawati said.

Her party had contested the previous assembly elections in Delhi.

BSP leader Ram Achal Rajbhar has already been appointed party in-charge
of poll-bound Delhi. He is also party in-charge in Uttarakhand. Delhi
will go to Assembly elections by the year-end.

New Delhi: Demanding a high-level probe into the charges levelled by IPS
officer D G Vanzara against the Gujarat government, BSP today said the
matter should also be discussed in both Houses of Parliament. âOur
partyâs opinion is that it (Vanzara allegations) should be discussed in
both Houses. At the same time there should be a high-level inquiry into
it, because it is a serious issue,â BSP chief Mayawati told reporters
outside
Parliament.
Mayawati. AFP.

In his 10-page resignation letter, Vanzara, who is lodged in Sabarmati
Central Jail in connection with a string of alleged fake encounter
cases, had said the accused officers and men âsimply implemented the
conscious policyâ of the state government. Vanzara accused the state
government, particularly former Minister of State for Home Amit Shah of
betraying him and 32 other officers, in jail in encounter killing cases.

Mayawati said, âIf a proper inquiry is held, then many persons at higher
level will come under the shadow of the probe.â The probe will be a
lesson for bureaucracy and it will try to perform its duty with cautious
approach and with responsibility, she said. Asked whether the probe
should be carried out by CBI or any other agency, the BSP supremo said,
âIf all other parties want CBI probe, then I think CBI should better do
it.â

On the issue of reducing fuel bill, she said government should take some
concrete steps for curbing fuel expenditure.

Vanzaraâs allegations should be probed: Mayawati

The Only alternate and the
hope of the nation is BSP after the dismal rule of both Congress and
BJP. People are just fed up with them.

Vanzara’s allegations should be probed: Mayawati

Look at the mad mentality of J
who is scared of Maya and do not wish to give his full name and
details. Even his own wife, mother and sisters will not like him calling
another woman as b##ch let him try calling them like that and see what
he gets. Media must restrain such caste mad mentalities of such persons
otherwise people will think such media as also mad media.
Ram Reddu,
Modi’s RSS, VHP, BJP’s asses will also be kicked by the people in the
coming elections for their mad hatred, angry, jealousy anti untouchables
and fanatic hindu mentality and also of the media who support them.

Also known as: Three Baskets of the Law
Date: 240 BCE

Oldest surviving Buddhist scripture and law, originally compiled orally about
240 BCE and finally written down in the Pali sacred language about 80
BCE It is the foundation of Buddhism, a religion founded by the Awakened
One with Awareness (Buddha), whose real name was Prince Siddhartha
Gautama (ca. 550âca. 480 BCE). The documents fall into three âbasketsâ
(collections): the Sutta Pitaka (or legendary discourses of Buddha), the
Vinaya Pitaka (the regulations of monasticism), and the Abhidharma
Pitaka (the scholasticism). They consist of teaching dialogues between
Buddha and his followers, espousing self-renunciation and denial of
worldly lusts and cares in order to find Nibbana (a cessation of Dukkha
(suffering). Basic to Buddhism are its âfour noble truthsâ (proclaimed
by Buddha in a sermon at Benares [Varanasi], India): that all existence
is suffering; that suffering has a cause; that knowledge and
purification can remove suffering; and that the âEightfold Wayâ brings
an end to suffering.

Tripitaka is the collection of the teachings of the Buddha over 45 years in the Pali language, and
it consists of Sutta - conventional teaching, Vinaya - disciplinary
code, and Abhidhamma - moral psychology.

The Tripitaka was compiled and arranged in its present form by those Arahants who had immediate contact with the Master Himself.

The Buddha has passed away, but the sublime Dhamma which He unreservedly
bequeathed to humanity still exists in its pristine purity.

Although the Master has left no written records of His Teachings, His
distinguished disciples preserved them by committing to memory and
transmitting them orally from generation to generation.

Immediately after the final passing away of the Buddha, 500 distinguished Arahants
held a convention known as the First Buddhist Council to rehearse the
Doctrine taught by the Buddha. Venerable Ananda, the faithful attendant
of the Buddha who had the special privilege of hearing all the
discourses the Buddha ever uttered, recited the Dhamma, whilst the
Venerable Upali recited the Vinaya, the rules of conduct for the Sangha.

One hundred years after the First Buddhist Council, during King Kalasoka,
some disciples saw the need to change certain minor rules. The orthodox
monk said that nothing should be changed while the others insisted on
modifying some disciplinary rules (Vinaya). Finally, the formation of
different schools of Buddhism germinated after this council. And in the
Second Council, only matters pertaining to the Vinaya were discussed and
no controversy about the Dhamma was reported.

In the 3rd Century B.C. during the time of Emperor Asoka, the Third Council was held to
discuss the differences of opinion held by the Sangha community. At this
Council the differences were not confined to the Vinaya but were also
connected with the Dhamma. At the end of this Council, the President of
the Council, Ven. Moggaliputta Tissa, compiled a book called Kathavatthu
refuting the heretical, false views and theories held by some
disciples. The teaching approved and accepted by this Council was known
as Theravada. The Abhidhamma Pitaka was held in Sri Lanka in 80 B.C. is
known as the 4th Council under the patronage of the pious King
Vattagamini Abbaya. It was at this time in Sri Lanka that the Tripitaka
was first committed to writing.

The Tripitaka consists of three sections of the Buddhaâs Teachings. They are the Discipline (Vinaya
Pitaka), the Discourse (Sutta Pitaka), and Ultimate Doctrine (Abhidhamma
Pitaka).

The Vinaya Pitaka mainly deals
with the rules and regulations of the Order of monks (Bhikkhus) and nuns
(Bhikkhunis). It describes in detail the gradual development of the
Sasana (Dispensation). It also gives an account of the life and ministry
of the Buddha. Indirectly it reveals some useful information about
ancient history, Indian customs, arts, sciences, etc.

For nearly
twenty years since His Enlightenment, the Buddha did not lay down rules
for the control of the Sangha. Later, as the occasion arose, the Buddha
promulgated rules for the future discipline of the Sangha.
This Pitaka consists of the five following books:

The Sutta Pitaka consists chiefly of discourses delivered by the Buddha Himself on
various occasions. There are also a few discourses delivered by some of
His distinguished disciples, such as the Venerable Sariputta, Ananda,
Moggallana, etc., included in it. It is like a book of prescriptions, as
the sermons embodied therein were expounded to suit the different
occasions and the temperaments of various persons. There may be
seemingly contradictory statements, but they should not be misconstrued
as they were opportunely uttered by the Buddha to suit a particular
purpose.

This Pitaka is divided into five Nikayas or collections, viz:â

The fifth is subdivided into fifteen books:

The Abhidhamma is, to a deep thinker, the most important and interesting,
as it contains the profound philosophy of the Buddhaâs teaching in
contrast to the illuminating but simpler discourses in the Sutta Pitaka.

In the Sutta Pitaka one often finds references to individual, being, etc.,
but in the Abhidhamma, instead of such conventional terms, we meet with
ultimate terms, such as aggregates, mind, matter, etc.

In the Abhidhamma everything is analysed and explained in detail, and as such it is called analytical doctrine (Vibhajja Vada).

Four ultimate things (Paramattha) are enumerated in the Abhidhamma. They are
Citta, (Consciousness), Cetasika (Mental concomitants), Rupa (Matter)
and Nibbana.

The so-called being is microscopically analysed and its
component parts are minutely described. Finally the ultimate goal and
the method to achieve it is explained with all necessary details.

The Abhidhamma Pitaka is composed of the following works:â

Dhamma-Sangani (Enumeration of Phenomena)â¨Vibhanga (The Book of the Treatises)â¨Katha
Vatthu (Point of Controversy)â¨Puggala Pannatti (Description of
Individuals)â¨Dhatu Katha (Discussion with reference to Elements)â¨Yamaka
(The Book of Pairs)â¨Patthana (The Book of Relations)
* * *
According to another classification, mentioned by the Buddha Himself, the whole
Teachings is ninefold, namely: 1. Sutta, 2. Geyya, 3. Veyyakarama, 4.
Gatha, 5. Udana, 6. Itivuttaka, 7. Jataka, 8. Abbhutadhamma, 9. Vedalla.
Sutta- These are the short, medium, and long discourses expounded by the
Buddha on various occasions, such as Mangala Sutta (Discourse on
Blessings), Ratana Sutta (The Jewel Discourse) Metta Sutta(Discourse on
Goodwill), etc. According to the Commentary the whole Vinaya Pitaka is
also included in this division.

Geyya - These are discourses mixed with Gathas or verses, such as the Sagathavagga of the Samyutta Nikaya.
Veyyakarana - Lit. exposition. The whole Abhidhamma Pitaka, discourses without
verses, and everything that is not included in the remaining eight
divisions belong to this class.

Vedalla - These are the pleasurable discourses,
such as Chulla Vedalla, Maha Vedalla (M.N. Nos 43,44), Samma Ditthi
Sutta (M.N.No.9), etc. In some of these discourses, the answers give to
certain questions were put with a feeling of joy.
-ooOoo-