1302 LESSON 22X14 WEDNESDAY
Presentations in 360 degree surround Panorama photography
History
of Jambudipa is nothing but the battle between Buddhism & Brahmanism.-
Dr. B R Ambedkar.

Please render exact translation in you mother
tongue for this Google translation!
Say BIG NO to Diwali
Please Visit:

This panorama can be opened in several different resolutions. High

suitable for fast internet connections and modern computers. For slower

panorama. Some small details have been  sacrificed but the size of low

resolution panorama is nomore than 2 Mb.


The Buddhist temple and Monastery in Banjar North Bali, near Lovina, is
more then just a âtourist attractionâ. It is still used, and you can
find groups of people staying in the Ashram nearby. The Buddhist temple
is not a tourist trap, entrance is free, but donations are welcome. Even
the sarongs you may need to enter the temple, you can use for free. The
Buddhist temple is situated in the hills above Lovina and offers nice
views.


In the 6th century Buddhist monks suppose to have landed and settled in
the North of Bali, and the Hindu religion of Bali has a lot of Buddhist
influence.


The terraced complex has a few praying rooms with golden Buddhaâs, and
several Buddha statues in the garden. On the highest level of the
complex you find a Stupa, allmost like a small version of the Borobudur
in Java. In the temple you find references to the Borobudur.


For the High Resolution Flash version you may have to download the latest Flash Player Version from Macromedia.

Bell Shaped Stupa in the Garden 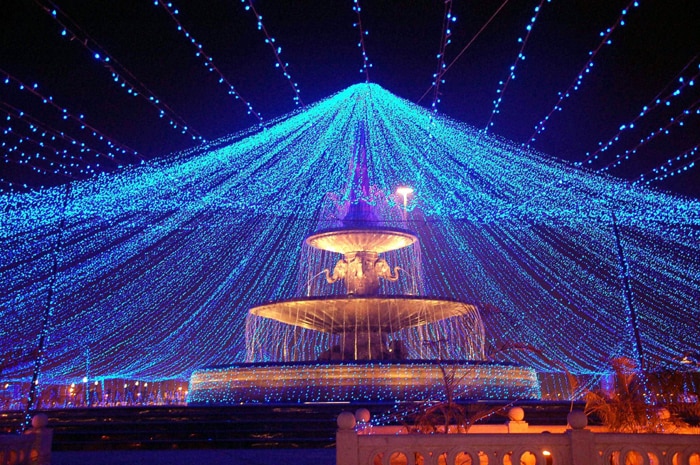 Say BIG NO to Diwali


Children have never been very good at listening to their elders, but they have never failed to imitate
them. â James Baldwin

History
of Jambudipa is nothing but the battle between Buddhism & Brahmanism.-
Dr. B R Ambedkar. In this country , the so called followers of Hinduism
are
gullible (naive) people those are following Brahmanism in the form of
sugar coated Hinduism. From generation to generation Brahmans have
spread many crooked stories to be fool masses & to keep Panchama
(SC/ST)-Bahujans following Brahmanical culture. All these Brahmanical
crooked stories have made such a psychological impact over people that
they are bound to follow these rituals without knowing the reality
behind these fraudulent stories!!

Hindus
says Light lamps & Laxmi (money) will
flow into your house. How it can be possible scientifically that
lighting candles will make money to come? If it would have be true
people those are living in remote areas, people those donât have access
to electricity would have be millionaire by now, as they use candles for
lighting purpose throughout year!! Goddess Laxmi this year might have
forgotten the path to Jambudipa & have made  economy to reach
lower of the lowest!!

Jawaharlal
Nehru in his book at page no. 204-5 writes that
the festivals like Holi, Diwali & Dussehra are imitation of the
Greek festivals. At page no. 235, Nehru explains that the Brahmins are
not a caste but an organisation who would offer their daughters for the
guests. Page no. 37 states “Hinduism
as a
faith is vague, amorphous, many sided, all things to all men. It is
hardly possible to define it, or indeed to say definitely whether it is a
religion or not, in the usual sense of the word. In its present form,
and even in the past, it embraces many beliefs and practices, from the
highest to the lowest, often opposed to or contradicting each other.”

On
this day Great Gana king (tribal) Bali was murdered by Waman- a Brahman
by cheating. If people want to celebrate this day, celebrate in the
name of King Bali, a Bahujan virtuous king.

Bhikhu Mahamodgalyayan was murdered by Brahmans on this day.

After
murder of Buddhists in the rule of Pushyamitra Shung this day was
celebrated as Eekadashi. Pushyamitra killed many Buddhists monks,
destroyed Buddha Vihars, burnt Buddhist literature in 200 BC. Many
Buddhist places were converted in Hindu temples. After this Buddhism
started diminishing & Brahmanism started strengthening.

When
Aryans came from Egypt through Iran , China they brought their culture
with themselves & the so called Hindu Vedas are imitation of Egypt
& Iranian books with little bit change in rules.

Ram
on the name of which this festival is celebrated is a fictitious
character, even supreme court of India has denied the existence of so
called Ram, hence where lies the logic of Hindus to celebrate? Many
scholars do agree that Pushyamitra

Shung was the so called Ram Chandar who imposed many laws on Panchama
(SC/ST)-Bahujans & stopped their progress. Ramayana was written
afterwards to be fool non Brahmans.


So
called Ram (Pushyamitra Shung) killed Shudra rishi Shambuk, who was
practicing meditation just because he was from lower caste & lower
caste people donât have the right to meditate!!

Hindus
worship Laxmi — Goddess of Money but the surveys conducted proved that
still 77% people are alive on the daily income of Rs.20, what to eat
and what to wear??
All
other developed countries like US, UK etc there are no god and goddess
like Saraswati or Laxmi but still maximum of the population are literate
and rich in comparison to India . Hindus have embossed the mental
slavery which had shut down all doors to be rational thinking. Apart
from above there is increase of Asthma patients by 15% every year
because of air pollution, by spending thousands on crackers we are doing
nothing but increasing Asthma patients. Also by spending thousands on
crackers we hope that Laxmi (money) was come, how it can be possible? The problem with Hindu people is that they never rational and not ready to be
literate and this make the Indian heritage rich with poor people rather slaves meant for slavery.

Diwali
is nowhere mentioned in Ramayana of Rishi Valmiki or Tulsidas. But term
Diwali find place in Jain books & exact dates are mentioned in Jain
scriptures. As Buddha Purnima is celebrated, the day of enlightenment
of Lord Buddha same way in Jainism this âDiwaliâ is a day of nirvana of
Lord Mahavira. But now a dayâs whole motive & real facts have been
vanished in time & gullible people are celebrating it with different
motive like earning money & to do business.

All
the fallacious stories â gateway to establish Brahmanical culture &
allied fests look harmless when seen be common eye, but in reality
these mythical stories are deadliest weapon to destroy Panchama (SC/ST)-Bahujans
culture & to impose Brahmanical culture. Once Panchama (SC/ST)-Bahujans will
lose their identity, hence theyâll not have any other option than to
follow the imposed Brahmanical culture. Hence we should immediately
discard the Hindu rituals, ceremonies, pilgrimages, festivals those have
made us slaves & we should
follow the 22 vows given by Dr. B R Ambedkar if we really want that our Panchama (SC/ST)-Bahujan society live with pride & dignity.
Today
the Chitpawan brahmins have RSSised everything stealthly in the name of
hindutva cult
for greed of votes for power and these violent militant hate mongering
crooks with dominating attitude are Murderers of democratic
institutions(Modi). Ex CEC Sadasivam committed an error of judgement
towards replacing all fradulent EVMs in phases till 2020 year
as suggested by CEC Sampath because of the cost of Rs 1600 crore. As a
result the BJP have started grabbing the MASTER KEY in States and Centre
murdering CJI, CEC, Parliament, Executive and denying the voters their
fundamental right of equality, fraternity and liberty as enshrined in
the Constitution.