The Trap of the Senses

The THE BLESSED NOBLE AWAKENED ONE - THE TATHAGATA  talked about desire and the six things by which desire is gratified: sights, sounds, smells, tastes, touch and mind-objects. Desire and lust for happiness, for suffering, for good, for evil and so on, pervade everything!

Sights… there isn’t any sight that’s quite the same as that of a woman. Isn’t that so? Doesn’t a really attractive woman make you want to look? One with a really attractive figure comes walking along, “sak, sek, sak, sek, sak, sek,” â you can’t help but stare! How about sounds? There’s no sound that grips you more than that of a woman. It pierces your mind! Smell is the same; a woman’s fragrance is the most alluring of all. There’s no other smell that’s quite the same. Taste â even the taste of the most delicious food cannot compare with that of a woman. Touch is similar; when you caress a woman you are stunned, intoxicated and sent spinning all around.

There was once a famous master of magical spells from Taxila in ancient Jambudvipa That is The Great Prabuddha Bharath. He taught his disciple all his knowledge of charms and incantations. When the disciple was well-versed and ready to fare on his own, he left with this final instruction from his teacher, “I have taught you all that I know of spells, incantations and protective verses. Creatures with sharp teeth, antlers or horns, and even big tusks, you have no need to fear. You will be guarded from all of these, I can guarantee that. However, there is only one thing that I cannot ensure protection against, and that is the charms of a woman. I can not help you here. There’s no spell for protection against this one, you’ll have to look after yourself.”

Mental objects arise in the mind. They are born out of desire: desire for valuable possessions, desire to be rich, and just restless seeking after things in general. This type of greed isn’t all that deep or strong, it isn’t enough to make you faint or lose control. However, when sexual desire arises, you’re thrown off balance and lose your control. You would even forget those raised and brought you up â your own parents!

If animals are caught in the hunter’s trap, it’s a sorrowful predicament. They are caught fast and held waiting for the owner of the trap. Have you ever snared birds? The snare springs and “boop” â caught by the neck! A good strong string now holds it fast. Wherever the bird flies, it cannot escape. It flies here and flies there, but it’s held tight waiting for the owner of the snare. When the hunter comes along, that’s it â the bird is struck with fear, there’s no escape!

The trap of sights, sounds, smells, tastes, touch and mind-objects is the same. They catch us and bind us fast. If you attach to the senses, you’re the same as a fish caught on a hook. When the fisherman comes, struggle all you want, but you can’t get loose. Actually, you’re not caught like a fish, it’s more like a frog â a frog gulps down the whole hook right to its guts, a fish just gets caught in its mouth.

Anyone attached to the senses is the same. Like a drunk whose liver is not yet destroyed â he doesn’t know when he has had enough. He continues to indulge and drink carelessly. He’s caught and later suffers illness and pain.

A man comes walking along a road. He is very thirsty from his journey and is craving for a drink of water. The owner of the water says, “you can drink this water if you like; the color is good, the smell is good, the taste is good, but if you drink it you will become ill. I must tell you this beforehand, it’ll make you sick enough to die or nearly die.” The thirsty man does not listen. He’s as thirsty as a person after an operation who has been denied water for seven days â he’s crying for water!

It’s the same with a person thirsting after the senses. The THE BLESSED NOBLE AWAKENED ONE - THE TATHAGATA  taught that they are poisonous â sights, sounds, smells, tastes, touch and mind-objects are poison; they are a dangerous trap. But this man is thirsty and doesn’t listen; because of his thirst he is in tears, crying, “Give me water, no matter how painful the consequences, let me drink!” So he dips out a bit and swallows it down finding it very tasty. He drinks his fill and gets so sick that he almost dies. He didn’t listen because of his overpowering desire.

This is how it is for a person caught in the pleasures of the senses. He drinks in sights, sounds, smells, tastes, touch and mind-objects â they are all very delicious! So he drinks without stopping and there he remains, stuck fast until the day he dies. 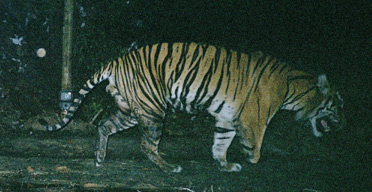