Mothers, daughters not safe under Modi and Akhilesh rule;

Apart from the levies on withdrawals beyond the free
limit, banks charge their customers for non-financial transactions like
checking balance and accessing mini-statements as well.

Take a look at this ATM charge structure HDFC Bank has had in place since 2014: 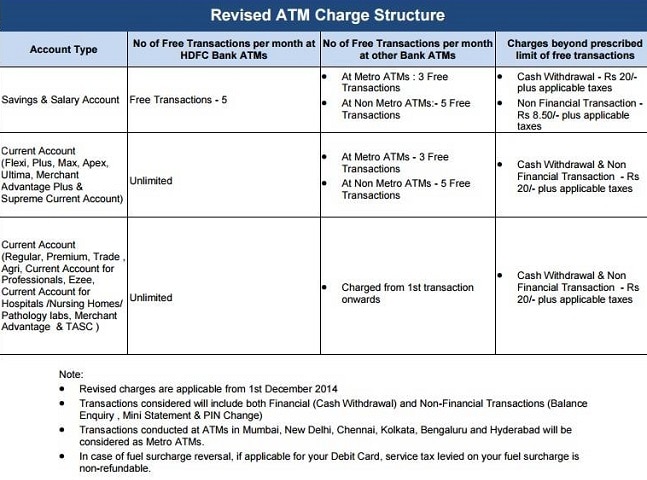 Source: hdfcbank.com
#1 Note the last column, where the bank elucidates the charges it
intends to levy on transactions “beyond prescribed limit of free
transactions”. For savings and salary account holders, cash withdrawal
carries and additional charge of Rs 20 and “non-financial transactions”
carry a charge of Rs 8.50.

Modiâs move to digitalise the Public Distribution System has added to the misery of residents.

At many centres here, it is a common sight to see men and women perched
on tree branches, waiting for hours for their turn to get their
fingerprints and biometrics verified by the PoS (point of sale)+
machines. That done, they climb down and walk back miles to the ration
shops where they get in another queue to collect the provisions they
have bought.

Instead of making life easier, the modi’s move to
digitalise+ the Public Distribution System has added to the misery of
residents of several backward areas, especially Kotra. There are 76
ration centres here of which 13 have very poor connectivity.

At
these places, ration dealers have to climb on trees to find internet
connectivity to use their PoS machines. People living in small
settlements like Merpur, Chibarwadi, Malwiya Khakariya, Peepla,
Bhuridebar, Beran, Palcha, Umariya, Samoli have to wait daily for hours
to get their biometric verification to purchase ration items like sugar,
kerosene.

“The only ration shop is many miles from our home but
the ration dealer camps on a hilltop which is even far away. Sometimes,
it takes 4-5 hours to find even a thin trace of internet network and
only then the machine works. The earlier system was better,” said Bhola
Gameti, a resident.

Many houses do not have an electricity
connection. There are no roads or proper health facilities. “How unwise
is this of the government to implement the PoS system before ensuring
proper infrastructure?” said a school teacher.

Top Comment
I urge modi to take note of this situation and resolve the issue on war footing. This can'’t go on. Period.Siv Sarkar

With bureaucrats looking upon Kotra as a punishment posting, delivery
of services has taken a severe hit here. While the younger men migrate
to surrounding areas to earn a livelihood, those left behind are the
elderly, women and children.

The block is largely inhabited by
two tribes â Garasiyas and Gameti â constituting 85% of the population.
Most families live in scattered hutments, often on hilly areas and
engage in agriculture, collection of forest produce and wage labour.

This is sad. Makes a mockery of our nation. Whole world is reading this
news. Modi is urged answer what if someone slips and fall, will Modi
pay for his/ her treatment. What if any accidents happen?

There
are original Hindus and as well as the RSSised 1% intolerant, militant,
violent, terrorist, lunatic, mentally retarded, shooting, lynching
cannibal chitpawan brahmin RSS (Rakshasa Swayam Sevak) of BJP (Bahuth
Jiyadha Psychopaths) who for the greed of votes and power are the
stealth, shadowy and discriminatory hindutva cult. Murderer of
democratic institutions (Modi) is just the use and throw curry leaves
puppet, chamcha, chela, slave, boot licker, and own mother’s flesh eater
of this cult.

While the 99% Sarvajan Samaj belong to the same
race have respect to all religions Modi of this hindutva cult has
distorted the EVM to win elections with the support of PRESSTITUTE
media.

Both Modi and the SP have not developed Varnasi and the Ghats on Ganga is still dirty.

Ms Mayawati of Bahujan Samaj Party has taken the right Constitutional
Techno-Politico-Socio Transformation and Economic Emancipation path for
the dignity, self-respect and honour not only for all societies women
but for also for men for Sarvajan Hitay Sarvajan Sukhaya i.e., for the
welfare, happiness and peace for all societies.

What the Womenâs Strike Means

The International Womenâs Strike is about taking on the degradations of capitalism in all spheres of life.

Feminist, grassroots, and socialist organizations around the world have
called for an International Womenâs Strike on March 8 in defense of
reproductive rights and against violence, understood as economic,
institutional, and interpersonal violence.

The strike will take
place in at least forty countries â the first internationally
coordinated day of protest on such a large scale in years: in terms of
size and diversity of organizations and countries involved, it will be
comparable to the international demonstrations against the imperialist
attack on Iraq in 2003 and to the international protests coordinated
under the banner of the World Social Forum and the global justice
movement in the early 2000s.

While Occupy, the indignados, and
Black Lives Matter did manage to have international echo and to trigger
demonstrations, occupations, and protests in a number of country, there
was little conscious international coordination among the various
organizations and groups involved. The Arab revolutions were an
extraordinary and historic event, but social and political organizations
in other countries failed to give birth to a powerful internationally
coordinated mobilization in their support.

If it succeeds, the
International Womenâs Strike will mark a qualitative and quantitative
leap in the long process of reconstructing an international social
mobilization against neoliberalism and imperialism, to which the various
movements of recent years, from Occupy to Gezi Park, from the
indignados to Standing Rock and Black Lives Matter have given form. It
will also signal the concrete possibility for a new, powerful,
anti-capitalist, and internationalist feminist movement.

Why Are We Calling It a Strike?

Many discussions about the strike, particularly in the United States,
have centered on whether it is correct to call March 8 a âstrikeâ at
all, rather than a demonstration. This criticism misses the point.
Womenâs strikes have always been more encompassing in their targets and
aims than traditional walkouts over wages and working conditions.

In 1975, 90 percent of Icelandâs women staged a strike in the workplace
and refused to perform unpaid socially reproductive work for a day, in
order to make Icelandic womenâs work and contribution to the society
visible. They demanded equal wages with men and an end to sexual
discrimination in the workplace.

In the fall of 2016, Polish
activists adopted the strategy and message of the 1975 Iceland womenâs
strike and organized a massive womenâs strike to stop a bill in
parliament that would have banned abortion. Argentinian activists did
the same last October to protest male violence against women.

These events â which spurred the idea for a larger strike on Womenâs Day
â demonstrate how a womenâs strike is different from a general strike. A
womenâs strike springs from political and theoretical reflection on the
concrete forms of womenâs labor in capitalist societies.

In
capitalism womenâs work in the formal labor market is only a part of the
work they perform; women are also the primary suppliers of reproductive
labor â unpaid labor that is equally important to reproducing society
and capitalist social relations. A womenâs strike is designed to make
this unpaid work visible and to emphasize that social reproduction is
also a site of struggle.

Moreover, because of the sexual division
of labor in the formal labor market, a vast number of women hold
precarious jobs, donât have labor rights, are unemployed, or are
undocumented workers.

Women working in the formal and informal
labor market and in the unpaid social reproductive sphere are all
workers. This consideration must be central to any discussion about the
reconstruction of a working-class movement not only in the United
States, but also globally.

Emphasizing the unity between the
workplace and the home is key, and a central organizing principle for
the March 8 strike. A politics that takes womenâs work seriously must
include not only strikes in the workplace but also strikes from unpaid
social reproductive work, part-time strikes, calls for reduced work
time, and other forms of protest that recognize the gendered nature of
social relations.

âStrikeâ has become the umbrella term under
which these various forms of action are included because it is the term
that best emphasizes the centrality of womenâs labor and their
self-identification as workers, whatever form their work takes.
Reclaiming the Right to Strike

The United States has perhaps the worst labor laws among liberal
democracies. General strikes and political strikes are forbidden,
strikes are tied to narrow economic demands addressed to employers, and
contracts often have explicit no-strike clauses, the violation of which
can cause the worker to lose their job and/or the union organizing the
strike to receive hefty fines. Additionally, several states, such as New
York, have laws that explicitly forbid public employees from striking.

The discussion about how to reverse this situation and empower workers
has been the main strategic concern of the US left over the past few
decades. Yet one of the dangers in this discussion is that of reducing
class struggle to economic struggle alone, and of conflating capitalist
social relations with the formal economy in a narrow sense.

A
transformation of labor relations in the United States requires not
simply an activation of the working class on the basis of economic
demands in the workplace, but its politicization and radicalization â
the capacity to wage a political struggle addressing the totality of
relations of power, institutions, and forms of exploitation in place.

This cannot be achieved by improving and expanding rank-and-file
organizing in the workplace alone; one of the central problems radical
labor organizing faces is its political and social isolation and
invisibility. Laying the groundwork for the revitalization of
working-class power will require operating on different levels â
creating large social coalitions acting inside and outside workplaces
and establishing bonds of solidarity and trust among labor, antiracist,
feminist, student, and anti-imperialist organizers and activists. It
also means harnessing social imagination through creative, intellectual
and theoretical interventions and experimentation with new practices and
languages.

Instead of a narrow focus on workplace struggles, we
need to connect movements based on gender, race, ethnicity, and
sexuality together with labor organizing and environmental activism.
Only by creating this collective totality will we be able to address the
complexity of issues and demands put forward by these various forms of
mobilization.

This is the path that the International Womenâs Strike is pursuing, with its expansive platform and inclusiveness.

March 8 will not be a general strike. But it will be an important step
toward the re-legitimation of the right to strike against the
degradations of capitalism felt in all spheres of life by all people.

What the Womenâs Strike Means | Jacobin
in defense of reproductive rights and against violence, understood as economic, institutional, and interpersonal violence.
jacobinmag.com