https://www.youtube.com/watchâ¦
DN 01 The All embracing Net of Views I II

DN 01 The All embracing Net of Views I II
DÄ«gha NikÄya 1 BrahmajÄla Sutta I. Talk on Wanderers (ParibbÄjakakathÄ) âIf, bhikkhus, others speak in dispraise of me,â¦
youtube.com

Note : If you have any problem with the content on this channel then email us, it will be removed, let us keep each other happy 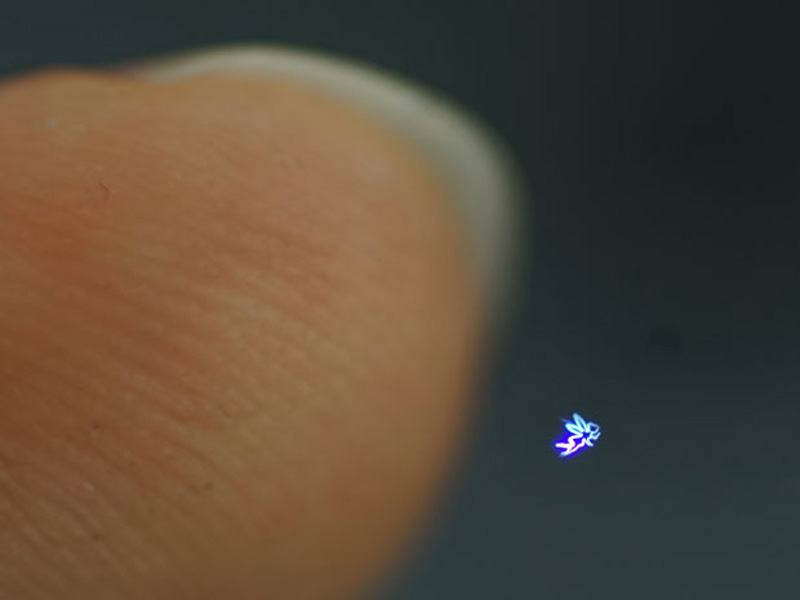 
A lot of work is currently going into creating Star
Wars-esque 3D holograms that can be seen by the naked eye without
wearing 3D glasses, and now researchers have found a way to make safe,
touchable mid-air displays using femtosecond lasers.

It is
possible to create holograms in mid-air using a laser-induced plasma
display, which works by ionising air molecules so that they release
extra energy in the form of bluish-white photons that can be seen
easily.

The plasma photons are known as 3D pixels, or rather voxels, and at
the moment, the lasers used to make 3D holograms are nanosecond lasers,
meaning they fire tens or hundreds of thousands of times per second to
heat up specific points of air.

A 3D hologram you can feel

It is not safe to come into contact with such a holographic display, as ionised air molecules will definitely burn human skin.

Instead,
Japanese researchers from 3D display firm Aerial Burton and four
Japanese universities have found a way to speed up their lasers so that
holograms are safe to touch by using femtosecond 1Kh infrared pulsing
lasers, which fire every millisecond.

By using femtosecond lasers, the hologram is safe to touch, and you can feel it.

“Shock
waves are generated by plasma when a user touches the plasma voxels.
The user feels an impulse on the finger as if the light has physical
substance,” the researchers write in their paper.


The researchers succeeded in displaying a swarm of tiny fairies in
broad daylight floating and moving around in mid-air that were clearly
visible to watching bystanders and able to be captured on video.

As
long as the laser isn’t firing at the same spot in the air for 2,000
consecutive milliseconds, the air molecules aren’t ionised enough to
burn, but are still bright enough to see, and the researchers say that
they only need 17 milliseconds worth of voxels for the display to work.

“Our
motivation for developing this display was that we thought it would be
useful in emergencies if text could be displayed in mid-air,” Aerial
Burton’s director Akira Asano said in a video.

“When we developed
this as a commercial product, we wanted to make it transportable by car
so the 3D projector can be used anywhere.”


Apart from creating holograms that are safe to touch, many
other problems remain, such as the expensiveness of the technology, as
well as the fact that it might be dangerous for the human eye to
perceive.

The researchers noted that no one should view the laser
beam directly, only the image it projects, and they advise that users
still wear infrared glasses until the technology has fully matured.

Australian and Chinese researchers meanwhile have discovered that a holographic display is possible using a mesh made from graphene oxide and lasers,
which works for a pop-up 3D holographic display, and finally University
of Bristol researchers have been able to create holograms that can be touched and seen using ultrasound.

Stay up to date
with our daily newsletter

7D laser hologram technology evolving in japan DEMO
A hologram is a physical structure that diffracts light into anâ¦
youtube.com


https://www.youtube.com/watch?v=EzL6-6144nw&t=332s
7D Holographic Technology - A once not considered advertiser friendly video
Dan Flynn
Published on Oct 1, 2017
I signed up with humans, not machines. This video was once considered
not suitable for advertising. It’s too crazy, people. ROBOTS now
DECIDING WHAT IS ADVERTISER FRIENDLY??? REQUEST A MANUAL REVIEW ON
Channels that have BEEN ADVERTISER FRIENDLY FOR YEARS? NO grandfather
clause, not one? A form for each video? That’s a lot of forms!! and Very costly in time.
I ENTERED INTO AGREEMENTS WITH HUMANS.. NOT MACHINES.. LOL..
(it’s funny, but sad).
I’ll be moving on to other mediums where I don’t have to worry about
machines breaking the law in ways that see the humans programming them
so that they (humans), can avoid liability and impress their associate
preferred channels, as that IS what it is. Selective prejudice.
Nepotism, etc, is what it is.
This channel of mine was a great test
to see how the business works. I understand that, now, I have to deal
with other companies, (outside of youtube but work with teams on
youtube(???), who’ll expose my videos to a bigger audience, and pay for
it?
That was YT’s job, or so I thought when I first signed on.
Soon, I’ll only be dealing with more companies when they, too, do,
exactly, what YT is currently doing.. selective prejudice. Favoring
certain content and friends who have it, over others.
IT was bound to happen.
IT was a fun ten year run.. but I do know I can make a lot more just on
BitChute.. showing videos ‘from and right off of youtube,’ and
commenting in the very same way.. but with ONE very big difference. I’ll
be in the video, in person.
Time to play, you say?
I got game. Lots of it.

Stay tuned.
ITs about to get interesting.
Cheers.

What’s real? It’s a conspiracy that the general masses use out of date
technology and if that is so? Where are they now with 3 dimensional
reality today that we don’t know about? Can a hologram slap you and you
feel it? Is that 10D technology? Where’s it all leading, and? Is it
safe? 7D technology is introducing societies to the reality of an image
that isn’t really there. What is isn’t really there, and is 7D
technology but the tip of a very, most, terrifying Ice Burg that will
prove to be more than meets the eye ‘’in every regard,'’ in years to
come? Leave a comment below, and keep your eyes open… or, well,.. pay
attention to what’s going on at best. Is this a peak into the alien
invasion, a bunch of holograms that can do more than just be seen? Watch
the video, and tell me what you think.
Made for content.
https://en.wikipedia.org/wiki/Fair_use

7D Holographic Technology - A once not considered advertiser friendly video
I signed up with humans, not machines. This video was onceâ¦
youtube.com

8. Dai Kannon of Kita no Miyako park
This statue was once known as the tallest in the world when it made its
grand debut back in 1989 and only held the title until 1991. The 289
foot or 88-meter tower was planned out in 1975 and comes with 20 floors
and an elevator.

7. Great Buddha of Thailand
Known also as
The Big Buddha and several other nicknames, this is recognized as the
tallest statue in all of Thailand as itâs 300 feet or 92 meters tall.
Construction started back in 1990 and wasnât finished until 2008.

6. Qianshou Qianyan Guanyin of Weishan
Also referred to as the Guishan Guanyin of the Thousand Hands and
Eyes, this statue made out of gilded bronze and happens to be 325 feet
or 99 meters tall. It can be found in the Peopleâs Republic of China.

5. Mao Zedong Statue
This statue isnât one of the biggest but we would like to mention that
the 37 meter or 121-foot statue depicting Mao Zedong was recently
destroyed. The given reason was unclear and now 9 months and the
equivalence of $460,000 are wasted.

4. Ushiku Daibutsu
This
Buddha statue can be found situated in the Ushiku, Ibaraki Prefecture in
Japan. Construction on the statue finished back in 1993. The statueâs
height comes out to a grand total of 330 feet or 100 meters tall.

3. Emperors Yan and Huang
The statue depicting the two Emperors of China was completed back in
2007 and is found in Zhengzhou, Henan, China. The tower was built until
it reached its completed height of 348 feet or 106 meters.

2. Spring Temple Buddha
Located in Lushan, Henan, China, this Vairocana Buddha statue is the
second tallest statue in the world. Completed way back in 2002, the
statueâs total height comes out to exactly 355.8 feet or 108.45 meters
tall.

Before we reveal number one, let us know in the comments
below which one of these statues you enjoyed the most and donât forget
to subscribe! And now…

1. Laykyun Setkyar
This is the
tallest statue in the world and stands at a towering 380 feet or 115.8
meters tall. The statue depicting Buddha is located in Khatakan Taung,
Myanmar(me an mar) and was completed back in 2008.
Category
Science & Technology