WordPress database error: [Table './sarvajan_ambedkar_org/wp_comments' is marked as crashed and should be repaired]
SELECT ID, COUNT( comment_ID ) AS ccount FROM wp_posts LEFT JOIN wp_comments ON ( comment_post_ID = ID AND comment_approved = '1') WHERE ID IN (5289) GROUP BY ID

Wish you success on the day you file your nomination on behalf
of BSP movement for social transformation for the happiness, welfare,
and peace of all societies.
You may with the permission of high command register with the EC that
Ballot Papers in the polls now and during Scrutiny of your papers along
with all our contestants which you did successfully in the Hindu News
Paper.
Wishing success to all our contestants,

With lots of Metta

Please Note:
If the EC insists on using EVMs, kindly demand for EVM’s software with its source code

Desktop using Google Chrome:
Use your mouse or trackpad to change your view while the video plays.

YouTube app on mobile:
Move your device around to look at all angles while the video plays

Google Cardboard:
Load the video in the YouTube app and tap on the cardboard icon when
the video starts to play. Insert your phone in cardboard and enjoy.

Myanmar is one of the most mysterious
countries in the world. It borders India, Bangladesh, China, Laos and
Thailand. Each of these destinations (except, perhaps, for Bangladesh)
is full of tourists. But Myanmar remains outside of usual tourist
routes. There are no direct flights from Russia, visa to Myanmar is not
the easiest one to get, not to mention that it’s not really advertised
by travel agencies. This is why this amazing destination remains unknown
to the world.

To say that one misses a lot by not
going there is an understatement (you’ll understand why when you see our
panoramas). This country with a century-old history has preserved
countless of monuments and it is rightfully called the “Golden Country”
or “The Land of Golden Pagodas”. There are around 2500 pagodas there. In
fact, the entire country is one huge archaeological reserve, which
preserves heritage of ancient civilizations.

Of course, it’s impossible to describe thousands of pagodas and other
Myanmar landmarks in just one article and to show all of them in one
panorama cycle. So we’re planning to tell you only about the most
outstanding monument, the Shwedagon Pagoda (stupa).

Stupa is a dome symbolizing Buddha’s
teachings. Usually stupas serve as Buddhist shrines and repositories of
sacred Buddhist texts. Some stupas conceal different vessels with
Buddha’s pieces of clothing or his hairs. Stupas are topped with spires
that look like umbrellas, a symbol of protection from the rays of
ignorance. Bells are hanging on the stupas to express the symbol of
doing some good things.

The capital of Myanmar, Yangon (Rangoon)
is known for the most famous stupa in the country, the Shwedagon
Pagoda, along with a temple complex around it. These constructions are a
couple thousand years older than the city itself. The name comes from
Â«ShweÂ» (Burmese for “gold”) and Â«DagonÂ» (previously this settlement was
situated where the modern Yangon now exists).

According to the mystical yet forgotten
legend, in ancient times this was the place where relics of three
predecessors of Buddha were kept: the staff of Kakusandhi, the water
filter of Konagamana, and a piece of tunic of Kassapa.

One day unknown brothers took a few
hairs of Buddha from India, but during the trip they were attacked and
robbed several times. However, they were able to deliver part of the
sacred treasure â they brought eight hairs of Buddhism founder to
Myanmar.

A grand festivity was held to celebrate
this event. Lord Sakka and four spirits descended from heavens to choose
a worthy place to store Buddha’s hairs. They helped to discover three
forgotten sacred places, and, as a result, it was decided to keep all
sacred objects together with proper honors.

Thus, Shwedagon is the only temple in
the world which holds four Buddhist relics of such high value.
Furthermore, it’s one of the few structures created during the life of
Buddha.

It was built with great care and
thoroughness by ancient Burmese. They dug a hole on a hill near Dagon,
built a tomb, and covered it with a golden plate. Several stupas made
from different materials were erected on top of it one by one: golden,
silver, tin, copper, lead, marble, iron, and brick.

The Shwedagon Pagoda reached its current
height only in 1774. After being rebuilt several times by King
Hsinbyushin, it reached the height of 99 meters above the plate. At the
same time the Shwedagon Pagoda started looking the way it looks now.

All sixty-eight surrounding stupas are
gilded, while the Shwedagon itself is sheathed with golden plates from
top to bottom. 8000 gold plates, 5000 diamonds, 2000 gem stones and
semiprecious stones were used to decorate the main pagoda.

So it’s not surprising that the stupa
was repeatedly plundered over the years, and some parts, like three
hundred years old bell encrusted with jewels, are now lost. However, the
Shwedagon Pagoda in Myanmar has survived to see our days in its full
glory.

There are bells hanging along the
perimeter of the temple complex with wooden mallets lying nearby. It is
believed that if you make a wish and hit the bell three times it will
come true. So here and there you can always hear a bell’s ringing in the
distance.

This Myanmar landmark represents this
country like the Moscow Kremlin represents Russia, or Mount Fuji
represets Japan. The Shwedagon temple complex is one of the largest
architectural ensembles not only in Myanmar, but in all of Southeast
Asia. You can always see the golden cone of the central stupa dozens of
kilometers away from Yangon, both from sea and land.

In order to get to the pagoda you have
to climb the highest hill. But modern technologies made this task a lot
easier: an escalator can take you to the Scwedagon. And for those of you
who are thousands miles away from this amazing monument, there is a
perfect opportunity to see it from the height of our panoramas.

Jagatheesan Chandrasekharan
We
must join hands to promote Cultural Institute to Host world Museumâs
Collection of Buddhist Art in Circarama 360 degrees domes for happiness,
welfare and peace of all societies.
Email:
buddhasaid2us@gmail.com
http://sarvajan.ambedkar.org 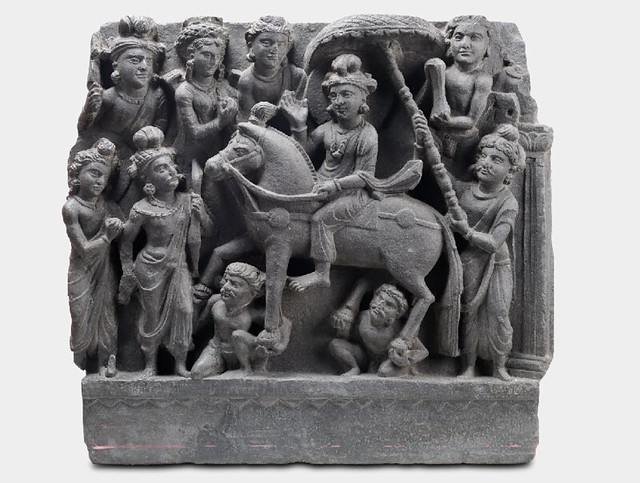 The Great Departure (c. 3rd century), in schist stone, depicts Siddhartha Gautama’s departure from his
family home to take up the life of a mendicant in pursuit of enlightenment. From google.com

For
the first time ever, the Indian Museum, Kolkata is making its extensive
holdings of Buddhist art available online. The project, which includes
the museumâs famed Gandharan sculptures, the largest collection in
India, is being developed in collaboration with the Google Cultural
Institute. So far, three exhibitions are on virtual display: The Life of the Buddha in Indian Art, Indian Buddhist Art, and a 360-degree panoramic Museum View.

The
Indian Museum, founded in 1814, is the oldest and largest multipurpose
museum in the Asia-Pacific region. Spread over some 10,000 square feet,
it houses a collection of more than 100,000 objects divided into three
main wingsâarchaeology, anthropology, and artâas well as collections by
the Zoological, Botanical, and Geological Surveys of India.

âThis
is the first virtual exhibition we are organizing after which all our
galleries will gradually be available on the Google Cultural Institute
website,â said museum director Jayanta Sengupta. âThis allows anyone to
have a walk through the gallery and see it as you do it with your eyes.
You can scroll around to see even the ceiling and the floor.â (NDTV)

The 360-degree panoramic Museum View
currently enables online visitors to take a virtual tour through eight
of the Indian Museumâs galleries, including the Gandhara, Bharhut, and
sculpture galleries, where they can âwalkâ among and view the exhibits
as they are displayed in the actual museum. Take a virtual “walk” though the Indian Museum’s impressive collection of ancient Buddhist art. From google.com

A
team of Googleâs experts from the UK and the US have been working since
last year using specialized and patented camera technology to create
high-resolution images of the museumâs historical treasures. Although
Googleâs team is only able to work on Mondays, when the museum is closed
to visitors, they expect all the Indian Museumâs galleries to be online
within a year.

The plans
include making some of the Indian Museumâs more notable cultural and
historical treasures available as ultra-high-definition gigapixel images
that will enable the virtual visitor to get up close to these rare
works. âIf itâs a painting then you can see all intricate details like
even the brush strokes, said Sengupta. âSeeing a gigapixel image is like
putting the object under microscope.â (NDTV)

Sengupta
dismissed suggestions that making the museumâs valuable collection of
art and antiquities freely available online could negatively impact the
number of visitors to the museum. âInternationally this has been the
case: after people see it online they are more motivated to see the real
thing and so they walk into the museum,â he said. (NDTV) 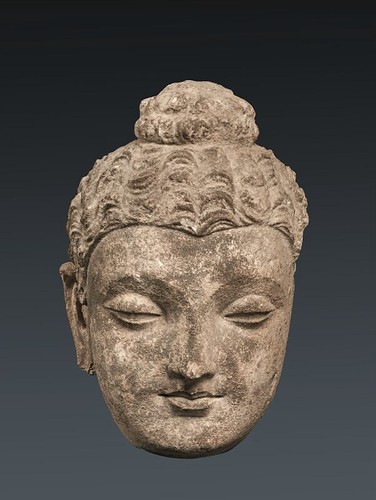 The
Google Cultural Institute, launched in 2011, describes itself as âa
not-for-profit initiative that partners with cultural organizations to
bring the worldâs cultural heritage online. We build free tools and
technologies for the cultural sector to showcase and share their gems,
making them more widely accessible to a global audience.â (Google
Cultural Institute)

In
addition to the Indian Museum, the Google Cultural Institute has
partnered with a number of institutions to make exhibition and archival
content available online, among them the Auschwitz-Birkenau State
Museum, the British Museum, the Museo Galileo in Florence, the Museum of
Polish History in Warsaw, and Yad Vashem in Jerusalem. The institute
also includes the Google Art Project, which provides high-resolution
images of artworks from museums in more than 40 countries,
three-dimensional recreations of world heritage sites, and archival
exhibitions.

The lowland of Ladakh, a green canvas valley that has backdrop of 958AD Alchi Monastery.
Closed for Winter
Overview
Stay
Food
Experiences
How To Reach

The village is famous for the existence
of one of the oldest monasteries in Ladakh (a national heritage) Alchi
Monastery. Mainly known for its magnificent, and well-preserved 11th- or
12th-century wall paintings, all in an Indo-Himalayan style.Dragung
House is traditionally built Ladakhi house which gives a dramatic view
of the Monasteries right from the doorstep

Alchi village is very
fertile and it is all green with apricot trees on both side of road.This
region had influence of Islam,Hinduism and Buddhism because it falls on
the route to Turkestan of China but its isolation helped the village
and gompas to keep their cultural traditions safe from the outer
influences.

We don’t spam, We tempt you with stories about the valley

WordPress database error: [Table './sarvajan_ambedkar_org/wp_comments' is marked as crashed and should be repaired]
SELECT * FROM wp_comments WHERE comment_post_ID = '5289' AND comment_approved = '1' ORDER BY comment_date