LESSON 2873 Tue 15 Jan 2019
https://www.jansatta.com/rajya/mayawatis-birthday-bsp-chief-turns-63-this-is-how-a-teacher-becomes-dalit-icon-of-india/881862/
Sarvajan Samaj Wishes a very Happy Mayawati’s 63rd birthday on Tuesday
May she be happy, well and secure!
May She Live Long!
May she ever have a calm. quiet, alert, attentive and an equanimity mind with a clear understanding that everything is changing! 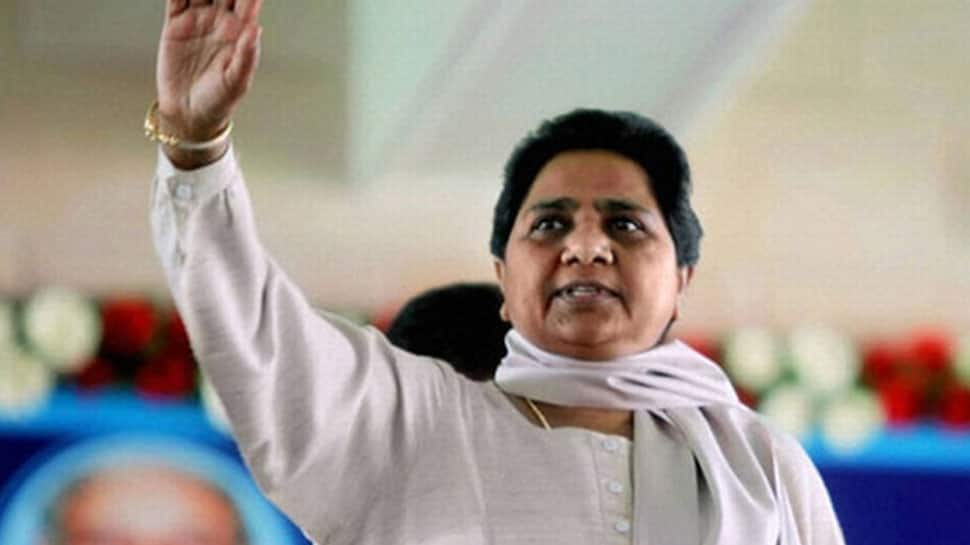 Preparations on for Mayawati’s 63rd birthday on Tuesday, BSP supremo to shed light on tie-up with SP in UP

LUCKNOW: BSP supremo Mayawati is expected to spell out her party’s
views on the political situation and the tie-up with Samajwadi party on
her 63rd birthday on Tuesday which the party workers look to make it a
grand event.

Massive preparations
are underway to celebrate the occasion in the state capital, with big
hoardings and blue (party colour) banners being erected near the streets
and around the party headquarters and her house here.

Party
sources said Mayawati will hold a press conference and release the 14th
volume of her book ‘A Travelogue of My Struggle Ridden Life and BSP
movement” on that day.

The BSP president is scheduled to leave for Delhi in the later half of the day to spend time with her family, they said.

During the presser, she is expected to respond to queries on the
political scenario in the country and the alliance with the Samajwadi
Party for the upcoming Lok Sabha polls.

Ever since her visit to
Lucknow last week, the BSP chief has been busy holding meetings with
party workers and leaders to take stock of ground realities and the
party’s preparation for the coming elections.

“Behenji (as
Mayawati is called) has directed party workers to strengthen their
presence across all booths and ensure that people from all castes and
social strata are connected with the party. She also took a feedback on
the work done in her absence,” a party leader said.

She has
asked the party cadres to be wary of the designs of the ruling BJP to
harm the interests of the SP-BSP alliance, the leader said.

Though no formal invitation to other party leaders has been extended,
party sources said BSP’s coalition partners from other states may arrive
in the national capital to wish Mayawati.

The visit by Rashtriya
Janata Dal leader Tejashwi Yadav to the state capital to meet the BSP
supremo on Sunday can be viewed in this light, the party leader said.

“Behenji usually spends her birthday with party workers and supporters
who celebrate the day as ‘jan kalyankari diwas’ by extending a hand of
support to the needy and downtrodden,” he added.

Classical English
Translated through
https://translate.google.com/
from Tamil. Please render correct translation and read.
Pongal
Some say this is a Hindu. Some people say Tamil festivals. Others say that the harvest is a festival.
A
festival for everyone is impossible in Hinduism. Hinduism is a religion
against the festivities. The meaning of the festival is to share the
things that belong to the others.
People
still enjoy the items in their festivities. But Hinduism does not
accept such a culture. It is the rule that anyone should be friendly
with anyone. chitpavan brahmin can only be in relationship with the chitpavan brahmin,
so that each caste can be associated with each other. Hence there is no
common Hindu festival in history. It is not a Tamil festival. Because
the Buddhist saints have celebrated the ‘Bohgi pantiga’ Deepa Shanti
‘Indra Festival’ from the Tamil language.
The
exact answer is the festivities of the ancient bhakti people, the
Sikhs. The ancient Buddhist people, the Sikhs, are SC/STs, now known by
the names of the people like Parrikar, Pallar, Vallar and Chakkaliar.
This festival is celebrated as a festival. This is a Buddhist festival.

What is the reason and history of bogus?

About
2500 years ago Indira tecamenum India’s freedom, equality,
fraternity-based social philosophy Dhamma tought Buddhist way of
loving, compassionate people who led Sakya Muni Buddha lived
in father of the country of his mother’s birth country,
between the running Rohini river water sharing between the two country
Kumitaiye War plentiful, the environment and the coming against the
Prince Siddhartha (Buddha) battle offset can not be, issues of war
tirvalikkatu saying that tecamvittu, princes lives.What young wife
YASHODHARA, baby irakulanaiyum other assets relinquished out of misery
reasons thereof lives to defend searching for ways of her At the end of
28 years of age, played the renunciation. Buddha Buddha, finally came to
the town of Kushinara, who taught the wisdom of his mind, taught the
wisdom of the people, enhanced the minds of the people and taught the
life of all the lives of the people. Finally, Buddha devoted his life to
the suffering of the people at the age of 85 Says in .483 Annai), on
the day of his death, was baptized in the third stool of the full moon
that was announced by the Buddha. That day was the last day of the month
of March. The people of tears shouted, crying in the ground and crying.

Since
the last day of each day, the people celebrated the death of the Buddha
on the last day. The Buddhist states are the state festival and every
month in the month of Citizens, bathe every day of the month, clean up
the house, cleanse the house, make the door of the house, lights on the
last day, and produce the grain, People also behaved like that. In the
course of one of these boghippantikai hands.

Furthermore, although the Srimariyas are
worshiping the Buddha directly from the Buddha, they are the goddess
Mariamman who worships this day. Mariamman is born to our Sikh tribe and
is the goddess of the Buddha. He was the same, Velamanganni and Amman.
Mari was known as Mariyatai (mary) because of his illness, which caused
him to be ill. That is why people worship the Buddhist hero Mariamman in
the day of the Buddha’s Nirvana. Thus, the Pokkipendika is a Buddhist
festival.

Boogi
means Indra. Indra is one of the Buddha’s thousand. Hindus portray
Indra as the wanderer of the girl. But the Buddha is Indra. Indra is a
derivative word from Indira. Identifier is a suppressor (Indium =
fifths, fire = hit), so he is called Buddha Aindur with the epicenter.
The ancient Buddhists (Dalits) who lived with the Buddha led the Buddha
(Dalits) were called Indras. Indira (Dalits) was the nation of Indira,
and later the Indian nation. This is due to the early Pokkongkal
festival called ‘Indra Festival’. So there is no error in saying that
the Buddha’s nude day is a festive day.

Enough
means wisdom. The Buddha attained the wisdom of sitting under the royal
palace and meditated with a pure mind. So it was called the Bodhi tree.
By this the word Buddhi became the word of Buddha. Buddhi Madhavan,
Bodhi Dharama and Bodhi Rajan were invited to Buddha. On the basis of
this, the Buddha’s day of nirvana day, the day of the last day of the
day, is marked as a festive festival. Therefore, it is not a crime to be
called a tutor.

It is also celebrated
with the anniversary of the Pongal festival. Buddhists are Buddhist
triumphs, ‘Buddha, Dhamma, Sangam’. Wisdom is wisdom; Dhamma means the
facts discovered by wisdom; The Sangam is the direction and direction of
the people who teach the truths of wisdom. The first head of the flag
was Sage Buddha. So the Buddha was called “Absolute, Character,
Charitable, and Moral”. He was called by the name of the Sangam and the
names of the Sangh. It was later called Shankar (’R'kor’ Rakiraki,
Shankara).
Also, the bikki is also known as the Deepa Shanti.

Pongal
Festival, which is celebrated after the Kalankara Tutorial, is just a
harvest festival? If so, what is the reason for the death of the Buddha
tomorrow? It is also true that Pongal celebrates the harvest. But it is
also a Buddhist festival.

Sun Pongal is a
festival celebrated on the day of the day of the festival of calamity
(sunshine). So it is said that the sun is celebrated as it is worshiped.
The sun is the central force for all lives. Exploring the nature of the
planets is our Sacred Society. So it is not wrong to worship it. But is
the sunspot celebrated only for that? Why is it especially celebrated
on the day of the Buddha?
People call the Buddha as Lord also.
Valluvar Adi Bhagavan is the Buddha. People call the sun as a day star.
Daylight means light / illumination. Light strikes the darkness. The Sun
is called the Pagalavan because it gives light to darken the darkness.
Buddha Bhagwan / Bhagavan was called by the light of ignorance of the
darkness of knowledge.

Brahmins
broke the animals in the yagna. Buddhist emperor Azaroor built the
world’s first veterinary medicine. The farmers of the Buddhists
worshiped the cows, including hawks, hoe, weed, and weavers, truffles,
and cattle feeding tractors. This is a coward.

On
the end of the ceremony, everyone will worship the Buddhist temple and
see each other, bless the elderly, the feast day and the other day.

The
fact is that the festival of “Pongi Pongal” is the festival of ancient
Buddhists, today’s SC/STs, which is celebrated as Panguni Tribunal,
Teaching, Pongal, Pongal Thirunal, Together with this hymn, greet
everyone, share the commodities, sakhi Muniyam Bhagavan Buddha blessing
and blessing, Panditar Ayodhidasar and brother Ambedkar will sang the
path of Buddhist saints! Dhamma surrenders !! The Sangam

Despite
the fact that an SC President was not allowed to enter a hindutva
temple, a small microscopic section of people feel that the are “More
Loyal than thy king” dreaming that they would be considered as chitpavan
brahmins if they heard of veda & tantra and feel proud of RSSised
hindutva.
When the SC/STs heard veda, tantra their ears were filled
with molten lead. 99.9% sarvajan samaj are not proud of RSSied hindutva
which is of chitpavan brahmins, by the chitpavan brahmins and for the
chitpavan brahmins but not for the stooges, chamchas, chelas, slaves,
bootlickers and own mother’s flesh eaters.

The Discussion of Seizure by Relatives [Mv.II.24.1]