https://www.youtube.com/watch?v=9j09gW-Ughs
The Buddha Triumphs Over the Demon Mara
Asian Art Museum
42.6K subscribers
The
Bhante Seelawimala of the American Buddhist Seminary, tells the story
of how the Buddha attained enlightenment with the use of artworks from
the Asian Art Museum’s collection.

youtube.com
The Buddha Triumphs Over the Demon Maraâ¦
The
Bhante Seelawimala of the American Buddhist Seminary, tells the story
of how the Buddha attained enlightenment with the use of artworks from
the Asian Ar…
https://www.learnreligions.com/the-demon-mara-449981 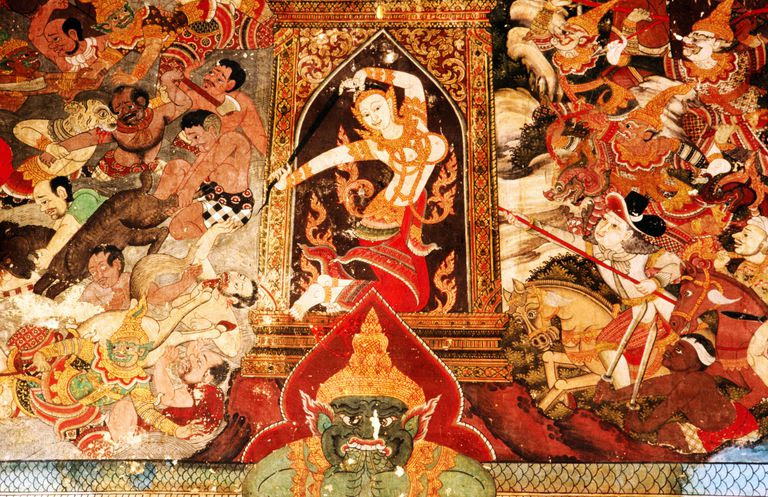 
Many supernatural creatures populate Buddhist literature, but among
these Mara is unique. He is one of the earliest non-human beings to
appear in Buddhist scriptures. He is a demon, sometimes called the Lord of Death, who plays a role in many stories of the Buddha and his monks.

Mara is best known for his part in the historical Buddha’s enlightenment.
This story came to be mythologized as a great battle with Mara, whose
name means “destruction” and who represents the passions that snare and
delude us.

There are several versions of this story; some fairly
straightforward, some elaborate, some phantasmagorical. Here is a plain
version:

As the about-to-be Buddha, Siddhartha Gautama,
sat in meditation, Mara brought his most beautiful daughters to seduce
Siddhartha. Siddhartha, however, remained in meditation. Then Mara sent
vast armies of monsters to attack him. Yet Siddhartha sat still and
untouched.

Mara claimed that the seat of enlightenment rightfully belonged to
him and not to the mortal Siddhartha. Mara’s monstrous soldiers cried
out together, “I am his witness!” Mara challenged Siddhartha, who will speak for you?

Then Siddhartha reached out his right hand to touch the earth, and
the earth itself spoke: “I bear you witness!” Mara disappeared. And as
the morning star rose in the sky, Siddhartha Gautama realized enlightenment and became a Buddha.

The Origins of Mara

Mara may have had more than one precedent in pre-Buddhist mythology.
For example, it’s possible he was based in part on some now-forgotten
character from popular folklore.

Zen teacher Lynn Jnana Sipe points out in “Reflections on Mara”
that the notion of a mythological being responsible for evil and death
is found in Vedic Brahmanic mythological traditions and also in
non-Brahmanic traditions, such as that of the Jains. In other words,
every religion in India seems to have had a character like Mara in its
myths.

Mara also appears to have been based on a drought demon of Vedic mythology named Namuci. The Rev. Jnana Sipe writes,

“While Namuci initially appears in the Pali Canon
as himself, he came to be transformed in early Buddhist texts to be the
same as Mara, the god of death. In Buddhist demonology the figure of
Namuci, with its associations of death-dealing hostility, as a result of
drought, was taken up and used in order to build up the symbol of Mara;
this is what the Evil One is like–he is Namuci, threatening the
welfare of mankind. Mara threatens not by withholding the seasonal rains
but by withholding or obscuring the knowledge of truth.”

Mara in the Early Texts

Ananda W.P. Guruge writes in “The Buddha’s Encounters with Mara the Tempter” that trying to put together a coherent narrative of Mara is close to impossible.

“In his Dictionary of Paali Proper Names Professor G.P. Malalasekera
introduces Maara as ‘the personification of Death, the Evil One, the
Tempter (the Buddhist counterpart of the Devil or Principle of
Destruction).’ He continues: ‘The legends concerning Maara are, in the
books, very involved and defy any attempts at unraveling them.’”

Is Mara the Buddhist Satan?

Although there are some obvious parallels between Mara and the Devil
or Satan of monotheistic religions, there are also many significant
differences.

Although both characters are associated with evil, it’s important to understand that Buddhists understand “evil” differently from how it is understood in most other religions.

Also, Mara is a relatively minor figure in Buddhist mythology
compared to Satan. Satan is the lord of Hell. Mara is the lord only of
the highest Deva heaven of the Desire world of the Triloka, which is an allegorical representation of reality adapted from Hinduism.

On the other hand, Jnana Sipe writes,

“First, what is Mara’s domain? Where does he operate? At one
point the Buddha indicated that each of the five skandhas, or the five
aggregates, as well as the mind, mental states and mental consciousness
are all declared to be Mara. Mara symbolizes the entire existence of
unenlightened humanity. In other words, Mara’s realm is the whole of samsaric existence.
Mara saturates every nook and cranny of life. Only in Nirvana is his
influence unknown. Second, how does Mara operate? Herein lays the key to
Mara’s influence over all unenlightened beings. The Pali Canon gives
initial answers, not as alternatives, but as varying terms. First, Mara
behaves like one of the demons of [then] popular thought. He uses
deceptions, disguises, and threats, he possesses people, and he uses all
kinds of horrible phenomena to terrify or cause confusion. Mara’s most
effective weapon is sustaining a climate of fear, whether the fear be of
drought or famine or cancer or terrorism. Identifying with a desire or
fear tightens the knot that binds one to it, and, thereby, the sway it
can have over one.”

The Power of Myth

Joseph Campbell’s retelling of the Buddha’s enlightenment story is
different from any I’ve heard elsewhere, but I like it anyway. In
Campbell’s version, Mara appeared as three different characters. The
first was Kama, or Lust, and he brought with him his three daughters,
named Desire, Fulfillment, and Regret.

When Kama and his daughters failed to distract Siddhartha, Kama
became Mara, Lord of Death, and he brought an army of demons. And when
the army of demons failed to harm Siddhartha (they turned into flowers
in his presence) Mara became Dharma, meaning (in Campbell’s context)
“duty.”

Young man, Dharma said, the events of the world require your
attention. And at this point, Siddhartha touched the earth, and the
earth said, “This is my beloved son who has, through innumerable
lifetimes, so given of himself, there is no body here.” An interesting
retelling, I think.

Who Is Mara to You?

As in most Buddhist teachings, the point of Mara is not to “believe
in” Mara but to understand what Mara represents in your own practice and
experience of life. Jnana Sipe said,

“Mara’s army is just as real to us today as it was to the
Buddha. Mara stands for those patterns of behavior that long for the
security of clinging to something real and permanent rather than facing
the question posed by being a transient and contingent creature. ‘It
makes no difference what you grasp’, said Buddha, ‘when someone grasps,
Mara stands beside him.’ The tempestuous longings and fears that assail
us, as well as the views and opinions that confine us, are sufficient
evidence of this. Whether we talk of succumbing to irresistible urges
and addictions or being paralyzed by neurotic obsessions, both are
psychological ways of articulating our current cohabitation with the
devil.” 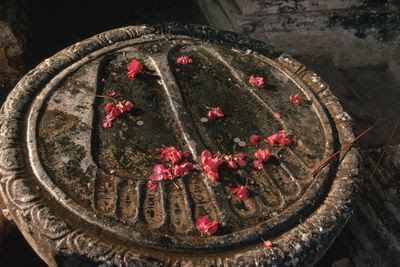 How Did the Buddha Reach Enlightenment? 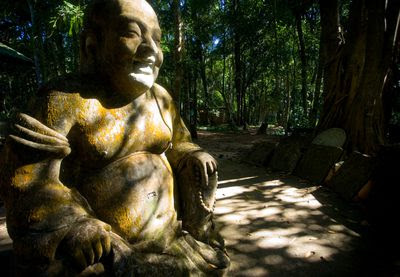 How a Sheltered Prince Became the Buddha: The Life of the Buddha 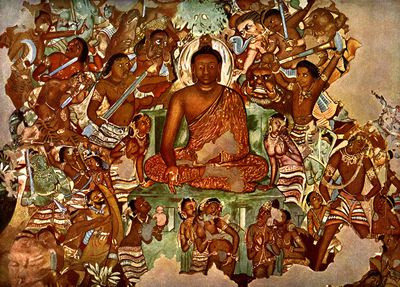 Rohatsu, or Bodhi Day, Is an Observation of the Buddha’s Enlightenment 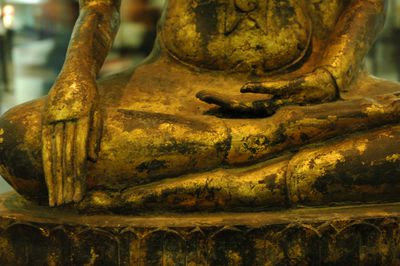 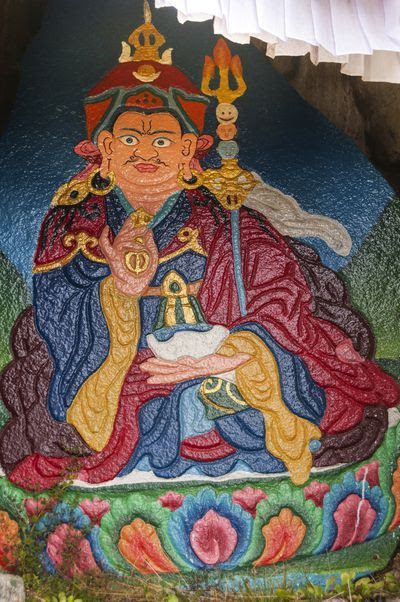 Why Is Padmasambhava a Patriarch of Tibetan Buddhism? 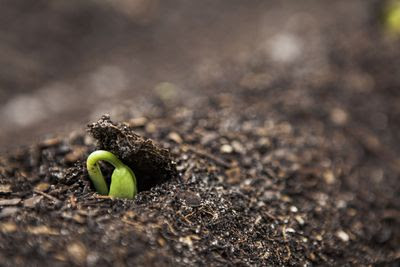 Ksanti or Kshanti Paramita Is the Buddhist Perfection of Patience 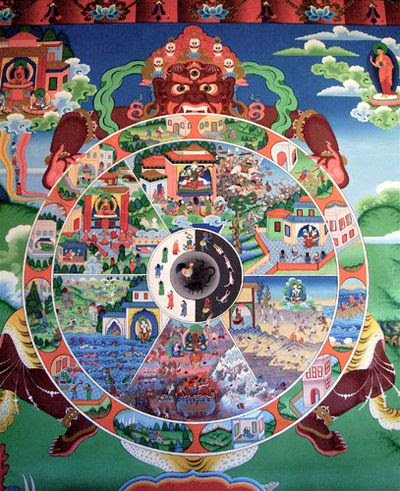 The Wheel of Life in Tibetan Buddhism 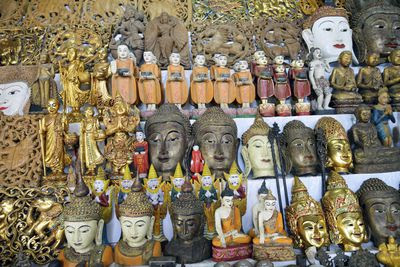 What Is a Buddha? And Is There Just One Buddha, or Many Buddhas?

What Does “Nirmanakaya” Mean? 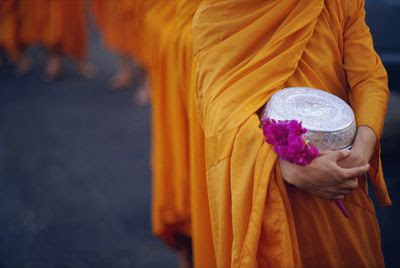 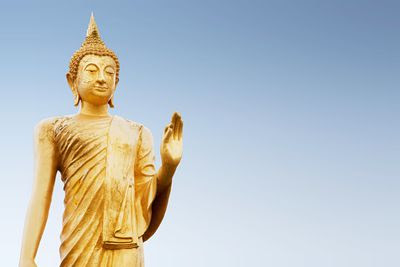 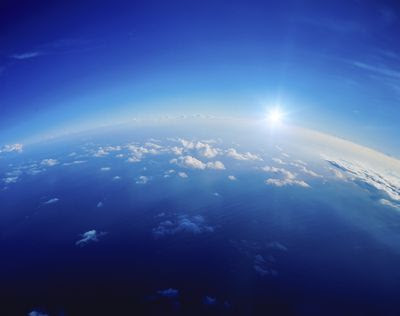 The Dharmakaya, In Buddhism, Is Beyond Existence and Nonexistence 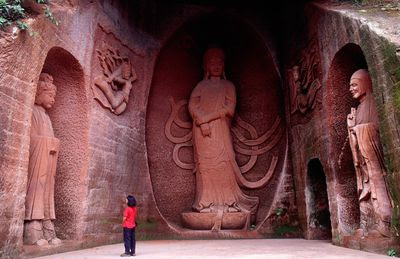 What Did the Buddha Say About the Ordination of Nuns? 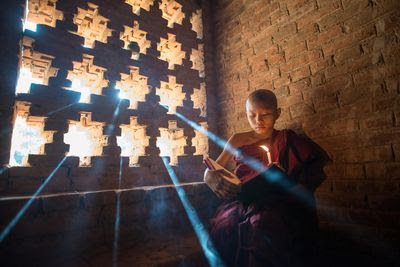 What is the Dhammapada? 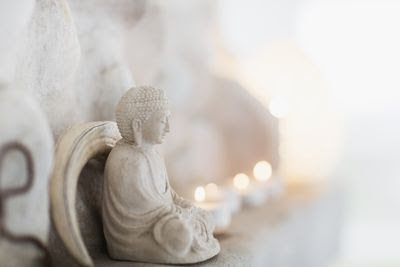 Buddhism and Metaphysics: What the Buddha Taught About Reality 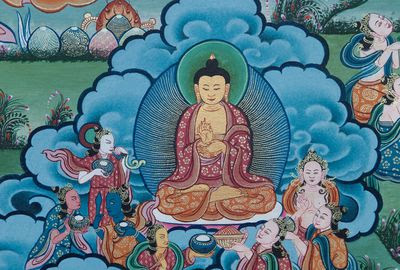 Sambhogakaya: One of the Three Bodies of a Buddha
39.Law of Kamma