Self respect is more
important than the material gains. Our Struggle is for honour, for
self-respect, not only for thr economicprogress alone.-Dr. B.R.AmbedkarJai
Bheem, Republic day Wishes-BAMCEF Chandrasekhar

Self respect is more
important than the material gains. Our Struggle is for honour, for
self-respect, not only for thr economicprogress alone.-Dr. B.R.AmbedkarJai
Bheem, Republic day Wishes-BAMCEF Chandrasekhar


âI feel that the
constitution is workable, it is flexible and it is strong enough to hold the
country together both in peacetime and in wartime. Indeed, if I may say so, if
things go wrong under the new Constitution, the reason will not be that we had
a bad Constitution. What we will have to say is that Man was vile.â


âThere is no nation of
Indians in the real sense of the world, it is yet to be created. In believing
we are a nation, we are cherishing a great delusion. How can people divided
into thousand of castes be a nation? The sooner we realise that we are not yet
a nation, in a social and psychological sense of the world, the better for us.â


âIndependence is no doubt
a matter of joy. But let us not forget that this independence has thrown on us
greater responsibilities. By independence, we have lost the excuse of blaming
the British for anything going wrong. If hereafter things go wrong, we will
have nobody to blame except ourselves. There is a greater danger of things
going wrong. Times are fast changing.â


âOur object in framing
the Constitution is rally two-fold:


(1) To lay down the form
of political democracy, and

Dr. B.R. Ambedkar, the man behind the drafting and formation of
the Indian Constitution, was not only a learned scholar and an eminent jurist
but also a revolutionary against social evils like untouchability and caste
system.


Born on 14 April 1891 in Mhow, Madhya Pradesh, Bhimrao Ramji Ambedkar was the
fourteenth child of his parents, Bhimabai Sakpal and Ramji. He was the victim
of religious untouchability by birth. He was born in a family, which was a part
of the Hindu Mahar caste. This caste was considered to be untouchables in the
society and have to face immense discriminations, both in the social as well as
in the economic fields. The male members of Dr. Ambedkar’s family were engaged
in the Army. His father was also in army and was promoted to the rank of
Subedar in the Mhow Cantonment, Indian Army.

At birth, “Sakpal” was the surname of Bhimrao and
“Ambavade” was the name of his native village. To avoid the
socio-economic discrimination and the ill-treatment of the higher classes of
the society, Bhimrao changed his surname from “Sakpal” to
“Ambedkar” by the help of a Brahmin teacher, who had great faith in
him. Since then, Bhimrao and his family used the title, Ambavedkar or Ambedkar.


Though B.R. Ambedkar was born in a family that was deprived socially as well as
economically, he had great interest in education. There were special schools
run by the Government for educating children of Army personnel and Ambedkar was
lucky to get admission in one of those schools. The standard of education was
good and Ambedkar developed a good grasp over Marathi and English. After his
father retired from the Army, the entire family shifted to Satara, Maharashtra.
Ambedkar was admitted to a local school there and had to face discriminations
from all sectors. He was made to sit on the floor, away from other students.
The teachers also discriminated him. He was a man of patience from his early
childhood and underwent all this agony without a fuss. In 1908, he passed his
Matriculation exam with flying colors from Bombay University. His higher
education continued in Elphinstone College. Political Science and Economics
were the subjects in which he graduated from the Bombay University in 1912.


Just a year after his graduation, Bhimrao Ambedkar lost his father. He acquired
a job in Baroda and it was the Maharaja of Baroda, who awarded him a
scholarship to go for higher education to the United States of America. It was
in New York that he could pursue his studies without any discrimination.
Finally, he acquired a degree and doctorate from Columbia University in the
year 1916. He was a Master of Arts and also attained a Doctorate in Philosophy
on his thesis on “National Dividend for India: A Historical and Analytical
Study”. In 1917, his scholarship was terminated by the Government of
Baroda and Bhimrao Ambedkar had to come back to India.


After his return to India, Bhimrao Ambedkar was made the political secretary of
the Maharaja of Baroda. He became victim of caste discrimination again and was
humiliated greatly by his peers. It was during this time that Ambedkar began
his movement to eradicate caste system and untouchability from society.
Ambedkar again went back to London, completed his law education and became a
barrister.

Untouchability and caste system were the two social evils that had haunted Dr. B.R.
Ambedkar since his childhood days. However, he thought of tackling the problem
himself and began his fight against untouchability. There were several ways by
which he was trying to do this. He started publishing a weekly journal called
‘Mooknayak’, where he criticized the orthodox system that prevailed in the
society. He spoke openly about the discriminations that were made to the lower
castes in the society and the humiliations that they had to undergo and endure.
He had also voted for creating separate electorates for the backward classes in
society. Reservations for “dalits” and other religious communities
were also demanded by Bhimrao Ambedkar.

B.R. Ambedkar also formed the “Bahishkrit Hitakarini Sabha” so that
the deprived and backward classes could get some opportunities to upgrade
themselves. He arranged for spreading education to these classes and tried to
improve their socio-economic conditions. He also became a member of the
Legislative Council in the year 1926. After this, he began an active movement
by bringing out marches and processions for the lower backward classes. In
1928, he was appointed to the Bombay Presidency Committee so that he could work
with the all-European Simon Commission. With this, B.R. Ambedkar made a mark in
the political arena of India.

He had criticized the Indian National Congress as well as the British Raj for
not being able to curb the problem of caste discrimination and untouchability.
His staunch stance against the orthodox authorities in India made him quite unpopular
with the politicians of those times. There were no considerable changes that
were evident in the social system of India. Gandhiji had rather started a fast
unto death campaign when Ambedkar demanded separate electorates for the
backward classes in society. After many upheavals it was decided that
reservations would be provided but there would be no separate electorates.

The Government Law College of Mumbai had Dr. Ambedkar as its Principal for two
years from 1935. He even contemplated of building a new political party that
would work against staunch and orthodox Hinduism. He named this new political
party as “Independent Labour Party (India)”, which can only managed
around 15 seats in the Central Legislative Assembly Elections in 1937. He also
occupied important positions in the government of the country. He had been
appointed to the Viceroy’s Executive Council as the Minister of Labor. Ambedkar
had also served in the Defence Advisory Committee.

(Could not find his email ID, may he doesn’t like to be in front and cant lead by example.

Following email ids of some of his senapati’s, could be found. We may send our mails to them.) 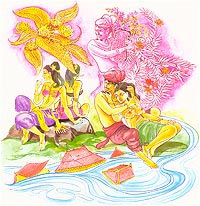 Verse 47. Pleasure Seeker Is Swept Away

For one who has a
clinging mind
and gathers only pleasure-flowers,
Death does seize and carry away
as great flood a sleeping village.

Explanation: Those men
and women , fascinated by worldly things, go about seeking pleasure, like a
garland-maker picking the flowers of his choice in a garden. But, gradually and
silently, death overcomes them like a flood in the night sweeping away a village
asleep.

Verse 47: Like one who
picks and chooses flowers, a man who has his mind attached to sensual pleasures
is carried away by Death, just as a great flood sweeps away a sleeping village.

While residing at the
Jetavana monastery, the Buddha uttered Verse (47) of this book, with reference
to Vitatubha, son of King Pasenadi of Kosala.

King Pasenadi of Kosala,
wishing to marry into the clan of the Sakyans, sent some emissaries to
Kapilavatthu with a request for the hand of one of the Sakyan princesses. Not
wishing to offend King Pasenadi, the Sakyan princes replied that they would
comply with his request, but instead of a Sakyan princess they sent a very
beautiful girl born of King Mahanama and a slave woman. King Pasenadi made that
girl one of his chief queens and subsequently she gave birth to a son. This son
was named Vitatubha. When the prince was sixteen years old, he was sent on a
visit to King Mahanama and the Sakyan princes. There he was received with some
hospitality but all the Sakyan princes who were younger than Vitatubha had been
sent away to a village, so that they would not have to pay respect to
Vitatubha. After staying a few days in Kapilavatthu, Vitatubha and his company
left for home. Soon after they left, a slave girl was washing with milk the
place where Vitatubha had sat; she was also cursing him, shouting, “This
is the place where that son of a slave woman had sat”. At that moment, a
member of Vitatubha’s entourage returned to fetch something which he had left
at the place and heard what the slave girl said. The slave girl also told him
that Vitatubha’s mother, Vasabhakhattiya, was the daughter of a slave girl
belonging to Mahanama.

When Vitatubha was told
about the above incident, he became wild with rage and declared that one day he
would wipe out the whole clan of the Sakyans. True to his word, when Vitatubha
became king, he marched on the Sakyan clan and massacred them all, with the
exception of a few who were with Mahanama and some others. On their way home,
Vitatubha and his army encamped on the sandbank in the river Aciravati. As
heavy rain fell in the upper parts of the country on that very night, the river
swelled and rushed down with great force carrying away Vitatubha and his army
into the ocean.

On hearing about these
two tragic incidents, the Buddha explained to the bhikkhus that his relatives,
the Sakyan princes, had in one of their previous existences, put poison into
the river killing the fishes. It was as a result of that particular action that
the Sakyan princes had to die en masse. Then, referring to the incident about
Vitatubha and his army, the Buddha said, “As a great flood sweeps away
all the villagers in a sleeping village, so also, Death carries away all the
creatures hankering after sensual pleasures.”

Then the Buddha spoke in
verse as follows:

WASHINGTON: Munnabhai hasn’t made it to America yet, but president Obama
wants to make sure he’ll have no problem visiting there. The US
president, using the backdrop of Florida’s famed Disneyland, identified
India, China, and Brazil among countries that could bump up tourist
traffic to America so that US can remain the world’s top global travel
destination.

The travel and tourism industry generated 7.5
million jobs and 2.7% of US GDP in 2010, but Washington is concerned
about declining trends in a world where countries large and small, far
and near, are duking it out for tourism revenue. Post 9/11, US share of
international traveler spending has fallen from 17% to 11% due to
security concerns and increased competition. Obama wants to arrest that
slide.

MAY YOU BE EVER HAPPY, WELL AND SECURE

MAY YOU LIVE LONG

MAY ALL SENTIENT AND NON-SENTIENT BEINGS BE EVER HAPPY

MAY YOU BE ALWAYS HAVE CALM, QUIET, ALERT,ATTENTIVE AND

EQUANIMITY MIND WITH A CLEAR UNDERSTANDING THAT