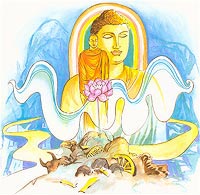 Verse 58. Lotus Is
Attractive Though In A Garbage Heap

As
beside the highroad
where rubbish in a pit is flung
there flourishes the lotus bloom
fragrant and the mindâs delight.

Explanation:
Someone is likely to dump refuse on a high road. In that heap of refuse, a
sweet-smelling lotus is likely to grow. 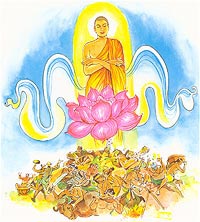 Verse 59. Arahats Shine
Wherever They Are

Explanation:
In the same way, in the heap of rubbish made up of various types of foolish
people, the disciple of the Buddha shines above all others.

Verses
58 - 59: As a sweet-smelling and beautiful lotus flower may grow upon a heap of
rubbish thrown on the highway, so also, out of the rubbish heap of beings may
appear a disciple of the Buddha, who with his wisdom shines forth far above the
blind (ignorant) worldlings.

2. andhabhute
puthujjane: blind worldlings. The worldlings are like the blind because
they are lacking in knowledge.

While
residing at the Jetavana monastery, the Buddha uttered Verses (58) and (59) of
this book, with reference to a rich man named Garahadinna and the miracle of
the lotus flowers.

Sirigutta
wanted to find out the truth about the Niganthas, whether they really possessed
the power of knowing other people’s thoughts, etc. So he made a long, deep
trench and filled it up with excreta and filth. Seats were then placed
precariously over the trench; and big empty pots were brought in and covered up
with cloth and banana leaves to make them appear as if they were full of rice
and curries. When the Niganthas arrived, they were requested to enter one by
one, to stand near their respective seats, and to sit down simultaneously. As
all of them sat down, the flimsy strings broke and the Niganthas fell into the
filthy trench. Then Sirigutta taunted them, “Why don’t you know the past,
the present and the future? Why don’t you know the thoughts of others?”
All the Niganthas then fled in terror.

Garahadinna
naturally was furious with Sirigutta and refused to talk to him for two weeks.
Then, he decided that he would have his revenge on Sirigutta. He pretended that
he was no longer angry, and one day asked Sirigutta to invite, on his behalf,
the Buddha and his five hundred disciples to partake of alms-food. So Sirigutta
went to the Buddha and invited him to the house of Garahadinna. At the same
time, he told the Buddha about what he had done to the Niganthas, the teachers
of Garahadinna. He also expressed his fear that this invitation might be a
reprisal and so the invitation should be accepted only after due consideration.

The
Buddha, with his supernormal power, knew that this would be the occasion for
the two friends to attain Sotapatti Fruition, and therefore accepted the
invitation. Garahadinna made a trench, filled it with live coals and covered it
with mats. He also kept some empty pots covered with cloth and banana leaves to
make them appear as if filled with rice and curries. The next day, the Buddha
came followed by five hundred bhikkhus in single file. When the Buddha stepped
on the mat over the trench, the mat and live coals miraculously disappeared,
and five hundred lotus flowers, each as large as a cart wheel, sprang up for
the Buddha and his disciples to sit upon.

Seeing
this miracle, Garahadinna was very much alarmed and he said rather incoherently
to Sirigutta, “Help me, dear friend. Out of my desire for revenge, I have
truly done a great wrong. My bad designs have had no effect at all on your
Teacher. The pots in my kitchen are all empty. Please help me.” Sirigutta
then told Garahadinna to go and look at the pots. When Garahadinna found all
the pots filled with food he was astounded and at the same time very much
relieved and very happy. So the food was offered to the Buddha and his
disciples. After the meal, the Buddha expressed his appreciation (anumodana) of
the meritorious act and then said, “Ignorant worldlings, lacking in
knowledge, do not know the unique qualities of the Buddha, the Dhamma and the
Samgha and so they are like the blind; but the wise, having knowledge, are like
people with sight.”

As a
leading Awakened country in the world, the Awakened Ones with awareness of this
country should seriously consider requesting the Government of Sri Lanka to
issue a commemorative postage stamp in honour of Dr B R Ambedkar, for the great
work he has done for his people and the cause of Awakeness with awareness in
Jambudvipa.

There
are nearly 250 Million aboriginal inhabitants of Jambudvipa (Scheduled
Castes/Scheduled Tribes (SC/ST)) which is virtually 1/4th of its Population.

Sri
Lanka should befriend these people.

Awakened
ones with awareness can cement ties between Jambudvipa SC/STs and Sri Lanka.

Ms Mayawati,
the Chief Minister of Uttar Pradesh, is an Awakened One with awareness. She
heads the Bahujan Samaj Party, which represents not only the Bahujans or
SC/STs, but the weakest strata and the poor of the upper castes of the Entire  Jambudvipa society.

This is
her fourth term as Chief Minister of Uttar Pradesh and is sure to continue for
a fifth term. She is an icon for millions of Jambudvipa’s SC/STs/OBCs/Minorities
and the poor upper castes. She is going to be the next Prime Minister of
Jambudvipa and would be called as Ms Maha Mayawati Ji.

With a
population of over 200 million people, Uttar Pradesh is Jambudvipaâs most
populous state, as well as the world’s most populous sub - national entity.
Uttar Pradesh (UP) is the second largest state-economy in Jambudvipa, with a
GDP of $103.5 billion in 2009.

Sri
Lanka should invite Mayawati to visit Sri Lanka and in turn seek the
strengthening of economic and religio -cultural ties between Uttar Pradesh and
Sri Lanka, The Awakened World with awareness must give her recognition outside Jambudvipa.

The
example of Ambedkar reviving Awakeness with awareness should be given the
widest publicity in the North and East to motivate the so called untouchable and
backward poor in these areas and the Hill Country of Sri Lanka to pursue a
similar path.

Awakened
Ones with awareness teaches equality. This was Dr Ambedkar’s message to his
fellow SC/STs and the entire country. Jambudvipa SC/STs who are Awakened Ones with
awareness (in the absence of Dr. Ambedkar) are spreading that message among Untouchables,
Backward  and forward poor in Sri Lanka
who feel persecuted and oppressed by members of the higher profile castes.

Dr
Ambedkar’s inspiring legacy along with Ms Mayawatiâs highly performing best and
meritorious governance will well play a bigger role in Sri Lanka’s efforts at
reconciliation between various communities. Not only in Sri Lanka but in the
entire world.