Practice a Sutta a Day Keeps Dukkha
Away 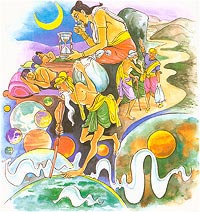 Verse 60. Samsara Is Long To The
Ignorant

Long is the night for the sleepless,
long is the league for the weary one,
samsaraâs way is long for fools
who know not the Dhamma True.

Explanation: To a sleepless person the night is very long. To
the weary the league seems quite long. To the ignorant, bereft of an awareness
of the Dhamma, the cycle of existence is very long, as he is not aware of how
to shorten it.

Verse 60: Long is the night to one who is wakeful; long is (the
journey of) one yojana to the traveller who is tired; long is samsara (round of
rebirths) to the fool, who is ignorant of the true Dhamma (the Teaching of the
Buddha).

1. Balavagga: Chapter on the Fool. Bala is the opposita of pandita;
it means those who are ignorant, stupid and mentally dull. They cannot think or
act right.

2. yojanam/yojana: a measure of length, about twelve miles.

The Story of a Person

While residing at the Jetavana monastery, the Buddha uttered
Verse (60) of this book, with reference to a certain young man and King
Pasenadi of Kosala.

One day King Pasenadi, while going out in the city, happened to
see a beautiful young woman standing at the window of her house and he
instantly fell in love with her. So the king tried to find ways and means of
getting her. Finding that she was a married woman, he sent for her husband and
made him serve at the palace. Later, the husband was sent on an impossible
errand by the king. The young man was to go to a place, a yojana (twelve miles)
away from Savatthi, bring back some Kumuda lotus flowers and some red earth
called ‘arunavati’ from the land of the dragons (nagas) and arrive back at
Savatthi the same evening, in time for the king’s bath. The king’s intention
was to kill the husband if he failed to arrive back in time, and to take the
wife for himself.

Hurriedly taking a food packet from his wife, the young man set
out on his errand. On the way, he shared his food with a traveller. He also
threw some rice into the water and said loudly, “O guardian spirits and
dragons inhabiting this river! King Pasenadi has commanded me to get some
Kumuda lotus flowers and arunavati red earth for him. I have today shared my
food with a traveller; I have also fed the fish in the river; I now share with
you the benefits of the good deeds I have done today. Please get the Kumuda
lotus and arunavati red earth for me.” The king of the dragons, hearing
him, took the appearance of an old man and brought the lotus and the red earth.

On that evening, King Pasenadi, fearing that the young husband
might arrive back in time, had the city-gates closed early. The young man,
finding the city-gates closed, placed the red earth on the city-wall and stuck
the flowers on the earth. Then he declared loudly, “O citizens! Be my
witnesses! I have today accomplished my errand in time as instructed by the
king. King Pasenadi, without any justification, plans to kill me.” After
that, the young man left for the Jetavana monastery to take shelter and find
solace in the peaceful atmosphere of the monastery.

Meanwhile, King Pasenadi, obsessed with sexual desire, could not
sleep, and kept thinking out how he would get rid of the husband in the morning
and take his wife. At about midnight, he heard some eerie sounds; actually,
these were the doleful voices of four persons suffering in Lohakumbhi Niraya
. Hearing those weird voices, the king was terrified. Early in the morning, he
went to the Buddha, as advised by Queen Mallika. When the Buddha was told about
the four voices the king heard in the night, he explained to the king that
those were the voices of four beings, who were the sons of rich men during the
time of Kassapa Buddha, and that now they were suffering in Lohakumbhi Niraya
because they had committed sexual misconduct with other people’s wives. Then,
the king came to realize the depravity of the deed and the severity of the
punishment. So, he decided then and there that he would no longer covet another
man’s wife. “After all, it was on account of my intense desire for another
man’s wife that I was tormented and could not sleep the whole of last
night,” he reflected. Then King Pasenadi said to the Buddha,
“Venerable Sir, now I know how long the night is for one who cannot sleep.”
The young man who was close at hand also said, “Venerable Sir, because I
had travelled the full distance of a yojana yesterday, I, too, know how long
the journey of a yojana is to one who is weary.”

Combining their two statements, the
Buddha spoke in verse as follows:


At the end of the discourse, the young man attained Sotapatti
Fruition.


Maya magic will work in Punjab

Magic of BSP supremo Mayawati would work in
Punjab after her four rallies which concluded in the state.

“the magic of
Bhenji (sister) will certainly work in Punjab as she had
addressed four big rallies in the state during the last couple
of days.”

He said that Uttar Pradesh chief minister Mayawati’s
message was clear that the BSP would contest Punjab elections
without any alliance, and concentrate on consolidating its own
vote bank.

“We would make dent into the votes of Congress as well as
SAD,” he said.

“the talks with them never initiated and therefore we don’t
have any regret on it. I however wish him a good luck as it
will be benefitted to us if Sanja Morcha does well in the
state and we would certainly emerge in the scene of the
state,” he asserted.

“The BSP is not having alliance in any state as our party
is not only for political gains but for overall socio-economic
change, which we will attain on our own strength,”

In 1992, the BSP won nine assembly seats with the SAD
boycotting the elections. But the party drew blank in the
previous three assembly polls in absence of any alliance.

The BSP led by Ms Mayawati  could play key
role in deciding who would come to power in the Punjab Assembly
elections.

Insiders view that the role of the BSP would be a decisive factor in this electoral battle.
âThe BSP candidates in the election could cut into our votes, a senior Congress leader from
Punjab said.
In the last Assembly election, the Dera Sacha Sauda had helped the Congress in the Malwa region.
The BJP, which has been sharing power with the SAD in Punjab, is in a
bad shape this time because the mood of the people is against it. But BSPâs strategy
because of the Congressâ campaign against it in Uttar Pradesh may change
the power game, Congress insiders viewed.

Mayawati asked the people of Uttarakhand should also bring BSP to power for their betterment.