WordPress database error: [Table './sarvajan_ambedkar_org/wp_comments' is marked as crashed and should be repaired]
SELECT ID, COUNT( comment_ID ) AS ccount FROM wp_posts LEFT JOIN wp_comments ON ( comment_post_ID = ID AND comment_approved = '1') WHERE ID IN (1793) GROUP BY ID

Practice a Sutta a Day Keeps Dukkha
Away 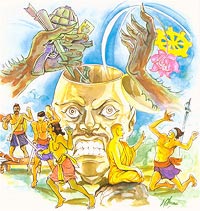 Verse 72. The Knowledge Of The Wicked Splits
His Head

Truly to his detriment
skill is born to the fool;
ruined is his better nature
and scattered are his wits.

Explanation: Whatever is
learned by the ignorant is conducive to harm. It brings about his own downfall.
Misplaced learning destroys whatever potential the learner possesses and
renders him useless in terms of real knowledge.

Verse 72: The skill of a
fool can only harm him; it destroys his merit and his wisdom (lit., it severs
his head).

2. muddha: head,
top, summit. According to the Commentary, it means knowledge.

While residing at the
Veluvana monastery, the Buddha uttered Verse (72) of this book with reference
to a peta-ghost named Satthikutapeta.

The Chief Disciple Maha
Moggallana saw this enormous peta-ghost while going on an alms-round
with Thera Lakkhana. In this connection, the Buddha explained that
Satthikutapeta, in one of his previous existences, was very skilful in throwing
stones at things. One day, he asked permissions from his teacher to try out his
skill. His teacher told him not to hit a cow, or a human being as he would have
to pay compensation to the owner or to the relative, but to find a target which
was ownerless or guardianless.

In conclusion, the Buddha
said, “To a fool, his skill or knowledge is of no use; it can only harm
him.”

Then the Buddha spoke in
verse as follows:

Hazarelal Gautam, the co-ordinator of
the Ramnagar Assembly seat in Barabanki district (which voted in phase one last
week), said: “Our top functionaries meet Behenji once in four months. We
don’t care if she interacts with us or not because our job is to propagate her
achievements.”

The whole world knows that this is a
paid news. A handful of scribes full of hatred for Scheduled castes, having
come to know that the Congress and the BJP are not in the race, hence are
attempting to project SP. Once Napolian said that he can face two battalions
but not two scribes.Today the scribes are
worst than some of the Congress and BJP leaders full of casteist and
religious mindset. They are just day dreaming.

[The
Buddhist Circle] For NRIs, Lucknow is a harbinger of change in UP -
“Many chief ministers came and went, but it is only Mayawati who has
tried to develop the city.

For NRIs, Lucknow is a harbinger of change in UP

“I was mesmerised by the change,” says an excited Sifat Khan, a
21-year-old who grew up in Australia and visited poll-bound Lucknow this
winter after four years. She was thrilled to find recreation spots,
malls, well-lit roads and a changing lifestyle - not to mention the
renovated commercial hub of Hazratganj.
Barnstorming by political
parties may be in full swing in the current elections in Uttar Pradesh,
India’s most populated state of over 200 million people and around 120
million voters. But many of those from the state who live abroad are
impressed with the development work and applaud Chief Minister
Mayawati’s efforts, saying it’s no mean feat in this erstwhile city of
nawabs and currently at the heart of a fierce political battle for
control of the country’s most politically consequential state.

“One thing that caught my eye was the Ambedkar Memorial Park,” said Sifat, a medicine student based in Brisbane.

“The
enormous and magnificent place drips with creativity. I was in awe of
the 62 huge elephant statues welcoming me,” Sifat told IANS.

“Another
great transformation was how organised Hazratganj has become! I clearly
recall being stuck in traffic for hours witnessing street fights and
brawls just to get parking at this
shopping centre. Now you see a wide expanded road with traffic lights
and multi-storeyed parking and its shoppers delight,” she added.
Even
though Maywati’s opponents are training the gun on her and say she has
failed to bring development and has wasted and misused central
government funds, outsiders are happy to see the new developments in the
historical city, home to 4.5 million people, which is focusing on
better infrastructure and safety.

For Sanjana Singh, travelling to the city from the US was a great experience.

“You
keep hearing a lot of things on television but coming here gives a
different picture. As an outsider you feel safe in the city and it
offers good outing spots too.”

Many NRIs from Uttar Pradesh were
holidaying in their native state in winter even as the state is in the
middle of seven-phased assembly polls. Lucknow, which has a population
of 4.5 million, votes Feb 19.

Some local people complain that
much of the construction work has benefited Mayawati’s brother who is
in the construction business, but for Huma Khan, who works abroad as a
consultant, what counts is the development effort in the city.

Hazratganj
and Gomti Nagar area have changed remarkably, she said. “There are
wide, three-laned, well-lit roads and there is the Ambedkar Smarak. It’s
hard to believe it is the same Lucknow.”

And clearly they have a good word for Mayawati, whose Bahujan Samaj Party (BSP) has been in power since 2007.

“Many
chief ministers came and went, but it is only Mayawati who has tried to
develop the city. The connectivity to the heart of the city
(Hazrarganj) and the airport are a compared to earlier days,” Huma Khan
said.

The development is not centred in the state capital alone,
points out London-based Samrat Basu, who used to dread travelling by
road earlier. He says it is a delight to take a road trip between
Lucknow and Banda
now.

“My visit this time was exceptional. I started my journey
from Delhi to Banda and I was very happy to catch the train UP Sampark
Kranti. The journey was very comfortable and safe,” he said.

And he had a similar experience from Banda to Lucknow.

“The
travel to Lucknow from Banda by train used to be a nightmare due to
erratic departure timings and trouble in boarding. So this time someone
suggested I travel by road. I was not confident, but was amazed to see
the construction of a long bridge on the Yamuna river near Chilla Ghat.
This particular improvement by the Uttar Pradesh government has
connected Banda so well with many cities by road. It took us only four
hours to reach Lucknow and we enjoyed the trip,” Basu told IANS.

“I must be thank Mayawatiji for her enormous contribution and vision to develop this city. We loved the advancement.”

The very fact that Samajwadi Party supremo Mulayam Singh Yadav
said that his party will support the Congress is a clear indication
that BSP is going to be the winner. And the media through paid news
started lifting up SP knowing very well that the Congress and the BJP
are no where in the race.

In
the 2007 Assembly elections, the Samajwadi Party won three of the four
constituencies in Etawah â Etawah city, Bharathana (where Samajwadi Party chief
Mulayam Singh Yadav himself contested and won) and Jaswantnagar. The fourth
seat, Lakhana, then a reserved constituency, had gone to the Bahujan Samaj
Party.

But
the equation stands drastically altered in 2012 when, post-delimitation, Etawah
goes to the polls with only three seats, two of which â Etawah city and Mulayam
Singh’s Bharthana (which fell vacant after he was elected to the Lok Sabha)
were wrested by the Bahujan Samaj Party in the 2009 by-elections. Only
Jaswantnagar, represented by Mulayam’s brother Shivpal Singh Yadav, remains
with the Samajwadi Party in the outgoing Assembly as far as Etawah is
concerned.

Following these setbacks in
his own backyard, Mulayam Singh cannot take Etawah for granted.

During Mulayam Singh’s rule gundagardi (muscle-flexing
by goons) is rampant.

On the upper caste vote.  Brahmins and Thakurs have decided to throw their weight behind Mayawati,because there is no gundagardi.

More than 17 million people were eligible to vote in 56 seats in the third phase of UP elections.

These elections are expected to be a litmus
test ahead of national elections, which are due in 2014.

If it were a separate country, Uttar Pradesh would be the
fifth-largest in the world by population, with more than 200 million people.

No major incidents were reported.

Manipur, Punjab, Uttarakhand and Goa are also voting in this
round of state elections. Results for all the states will be announced on March
6.

Uttar Pradesh, the most populous state in
India, is at the polls to elect its 403-seat state legislative
assembly. The third phase of polling commenced on 15th Feb 2012, and results will be
known on 6 March. With a population of 200 million people, Uttar Pradesh is
larger than Brazil. If it were a country, it would be the fifth largest.
Accordingly, it has the largest parliamentary representation at central level.
Another claim to fame for the state is that it has produced seven Indian prime ministers.

SC/STs, the “untouchables”, are a sizeable
population and the most prized voters. The incumbent chief minister, who goes
by the single moniker of Mayawati, is from this community. Hers is an
extraordinary story: the rise of a SC woman to the highest echelons of
power. She is a potential prime ministerial candidate.
The next community of significance in the hierarchy of voters is the Muslim
community. They comprise 18% of the state’s population and are being
relentlessly supported by Bahujan  Samaj party (BSP). Brahmins, the community located at the top of
the Indian caste pyramid, form the third grouping. In 2007, sitting chief
minister Mayawati and her party rose to power with a thumping majority on the
back of a combination of SC/ST and Brahmin votes. It was a stunning victory
that saw the fusion of the votes of communities traditionally at the polar
opposites of the Indian caste spectrum.

Mayawati remains a
favourite, with her Brahmin support base is intact with Muslims.

Brisk polling was
recorded for the third phase of UP Assembly elections for 56 seats in 10
district.

Voting began at 7 AM
for the third phase of assembly elections.

This phase will
decide the fate of three cabinet ministers, a minister of state, 29 sitting
MLAs and 14 former ministers.

More than 1.75 crore
voters are expected to cast their votes to seal the fate of 1,018 candidates in
the polling to be held in CSM Nagar, Sultanpur, Kaushambi, Allahabad, Jaunpur,
Chandauli, Varanasi, Sant Ravidas Nagar, Mirzapur and Sonbhadra.

Fate of 1,018
candidates in 10 districts, including Amethi and Rae Bareli, and Naxal-hit districts Chandauli, Sonbhadra and Mirzapur
would be decided in the third phase.

In this phase, as many as 48 ‘crorepatis’
are in the fray. Polling  ended  by 4 PM in Naxal-affected
area of Chakia in Sonbhadra and Duddhi in Robertsganj of Sonbhadra.

A total of 2,025 polling stations have been identified as sensitive and 1,766
as hyper sensitive.

The CEO said that polling was being held at 18,374 polling booths at 11,607
polling stations where 1,122 video cameras and 1,190 digital cameras have been
installed to maintain a vigil on poll process.

Stakes are high for ruling BSP,the no holds barred
fight for the 403 assembly seats.

WordPress database error: [Table './sarvajan_ambedkar_org/wp_comments' is marked as crashed and should be repaired]
SELECT * FROM wp_comments WHERE comment_post_ID = '1793' AND comment_approved = '1' ORDER BY comment_date