WordPress database error: [Table './sarvajan_ambedkar_org/wp_comments' is marked as crashed and should be repaired]
SELECT ID, COUNT( comment_ID ) AS ccount FROM wp_posts LEFT JOIN wp_comments ON ( comment_post_ID = ID AND comment_approved = '1') WHERE ID IN (1794) GROUP BY ID

Practice
a Sutta a Day Keeps Dukkha
Away 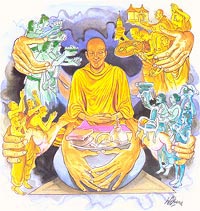 For
position a fool may wish:
among the bhikkhus precedence,
in monasteries authority,
from other families honours.

Explanation:
He is fond of being recognized for what he, in reality, is not. Yearns for
pre-eminence among peers. He craves for preference in matters relating to
residences. He is enamoured of the idea of receiving gifts and requisites from
other families as well. 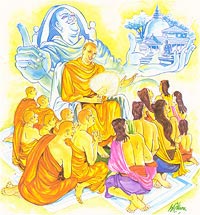 Verse 74. The Ignorant
are Ego-Centred

Both
monks and laymen, let them think
‘This was done by me,
whatever the works, both great and small,
let them depend on me’.
Such the intention of a fool,
swollen his greed and conceit.

Explanation:
The ignorant has this attitude of mind: “Let everybody know that this was
done by me alone. In whatever activity small or big my leadership shall
prevail. Everybody must follow me.” This conceit of the ignorant leads to
craving, uncontrolled desire and to a groundless pride, to a false sense of
superiority. These begin to grow.

Verse
73: The foolish bhikkhu desires praise for qualities he does not have,
precedence among bhikkhus, authority in the monasteries, and veneration from those
unrelated to him.

Verse
74: “Let both laymen and bhikkhus think that things are done because of
me; let them obey me in all matters, great and small.” Such being the
thoughts of the fool, his greed and his pride grow.

1. parakulesu:
those outside the family; (para = outside or others).

The
Story of Citta the Householder

While
residing at the Jetavana monastery, the Buddha uttered Verses (73) and (74) of
this book, with reference to Thera Sudhamma and Citta the householder.

Citta,
a householder, once met Thera Mahanama, one of the group of the first five
bhikkhus (Pancavaggis), going on an alms-round, and invited the thera to
his house. There, he offered alms-food to the thera and after listening to the
discourse given by him, Citta attained Sotapatti Fruition. Later, Citta
built a monastery in his mango grove. There, he looked to the needs of all
bhikkhus who came to the monastery and Bhikkhu Sudhamma was installed as the
resident bhikkhu.

One
day, the two Chief Disciples of the Buddha, the Venerable Sariputta and the
Venerable Maha Moggallana, came to the monastery and after listening to the
discourse given by the Venerable Sariputta, Citta attained Anagami Fruition.
Then, he invited the two Chief Disciples to his house for alms-food the next
day. He also invited Thera Sudhamma, but Thera Sudhamma refused in anger and
said, “You invite me only after the other two.” Citta repeated his
invitation, but it was turned down. Nevertheless, Thera Sudhamma went to the
house of Citta early on the following day. But when invited to enter the house,
Thera Sudhamma refused and said that he would not sit down as he was going on
his alms-round. But when he saw the things that were to be offered to the two
Chief Disciples, he envied them so much that he could not restrain his anger.
He abused Citta and said, “I don’t want to stay in your monastery any
longer,” and left the house in anger.

From
there, he went to the Buddha and reported everything that had happened. To him,
the Buddha said, “You have insulted a lay-disciple who is endowed with
faith and generously. You’d better go back to him and own up your
mistake.” Sudhamma did as he was told by the Buddha, but Citta would
not be appeased; so he returned to the Buddha for the second time. The Buddha,
knowing that the pride of Sudhamma had dwindled by this time, said, “My
son, a good bhikkhu should have no attachment; a good bhikkhu should not be
conceited and say ‘This is my monastery, this is my place, these are my
lay-disciples,’ etc., for in one with such thoughts, covetousness and pride
will increase.”

At the
end of the discourse, Sudhamma went to the house of Citta, and this time they
got reconciled; and within a few days, Sudhamma attained arahatship.

WordPress database error: [Table './sarvajan_ambedkar_org/wp_comments' is marked as crashed and should be repaired]
SELECT * FROM wp_comments WHERE comment_post_ID = '1794' AND comment_approved = '1' ORDER BY comment_date