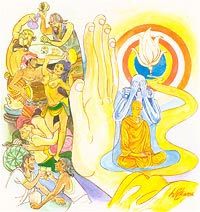 One is
the way to worldly gain,
another to Nibbana goes.
Clearly comprehending this
the bhikkhu, Buddhaâs follower
should wallow not in proffered gifts,
surrendering instead to solitude.

Explanation:
There is one way to worldly and material progress and profit. But the way to
Nibbana is quite different than that. The monk, who is the Buddhaâs disciple,
should be clearly aware of this difference. He must not take delight in the
worldly gifts with which he is being enticed. He must on the other hand seek
solitude.

Verse
75: Indeed, the path that leads to worldly gain is one and the Path that leads
to Nibbana is another. Fully comprehending this, the bhikkhu, the disciple of
the Buddha, should not take delight in worldly gain and honour, but devote
himself to solitude, detachment and the realization of Nibbana.

1.Vivekamanubruhaye
(vivekam + anubruhaye): Viveka - solitary seclusion. According to
the Commentary, the three kinds of vivekas are kayaviveka (seclusion of
the body or solitude); cittaviveka (detachment of the mind from human
passions) and upadhiviveka (Nibbana).

The
Story of Samanera Tissa of the Forest Monastery

While
residing at the Jetavana monastery, the Buddha uttered Verse (75) of this book,
with reference to Tissa, a samanera, who dwelt in a forest monastery.

Tissa
was the son of a rich man from Savatthi. His father used to offer alms-food to
the Chief Disciple Sariputta in their house and so Tissa even as a child had
met the Chief Disciple on many occasions. At the age of seven he became a
novice (samanera) under the Chief Disciple Sariputta. While he was staying at
the Jetavana monastery, many of his friends and relatives came to see him,
bringing presents and offerings. The samanera found these visits to be very
tiresome; so after taking a subject of meditation from the Buddha, he left for
a forest monastery. Whenever a villager offered him anything, Tissa would just
say ‘May you be happy, may you be liberated from the ills of life,’
(”Sukhita hotha, dukkha muccatha”), and would go on his own way.
While he stayed at the forest monastery, he ardently and diligently practised
meditation, and at the end of three months he attained arahatship.

After
the vassa, the Venerable Sariputta accompanied by the Venerable Maha Moggallana
and other senior disciples paid a visit to Samanera Tissa, with the permission
of the Buddha. All the villagers came out to welcome the Venerable Sariputta
and his company of four thousand bhikkhus. They also requested the Venerable
Sariputta to favour them with a discourse, but the Chief Disciple declined;
instead, he directed his pupil Tissa to deliver a discourse to the villagers.
The villagers, however, said that their teacher Tissa could only say “May
you be happy, may you be liberated from the ills of life”, and asked the
Chief Disciple to assign another bhikkhu in his place. But the Venerable
Sariputta insisted that Tissa should deliver a discourse on the dhamma, and
said to Tissa, “Tissa, talk to them about the dhamma and show them how to
gain happiness and how to be liberated from the ills of life.”

Thus,
in obedience to his teacher, Samanera Tissa went up the platform to deliver his
discourse. He explained to the audience the meaning of the aggregates (khandhas),
sense bases and sense objects (ayatanas), elements of the perpetuation
of the Teaching (Bodhipakkhiya Dhamma), the Path leading to arahatship
and Nibbana, etc. Finally he concluded, “And thus, those who attain
arahatship are liberated from all the ills of life and have Perfect Peace; all
the rest will still wander about in the round of rebirths (samsara).”

The
Venerable Sariputta praised Tissa for having expounded the dhamma so well. Dawn
was approaching when he finished his exposition, and all the villagers were
very much impressed. Some of them were surprised that Samanera Tissa knew the
dhamma so well, but they were also dissatisfied with him because formerly he
had talked so little about the dhamma to them; the others were happy and
contented to find the samanera to be so learned and felt that they were very
lucky to have him amongst them.

The
Buddha, with his supernormal power, saw from the Jetavana monastery these two
groups of villagers and appeared before them. His intention in coming to the
village was to clear up the misunderstanding amongst the first group of
villagers. The Buddha arrived while the villagers were preparing alms-food for
the bhikkhus. So, they had the opportunity to offer alms-food to the Buddha as
well. After the meal, the Buddha addressed the villagers, “O lay
disciples, all of you are so lucky to have Samanera Tissa amongst you. It is on
account of his presence here that I myself, my Chief Disciples, senior
disciples and many other bhikkhus now pay you a visit.” These words
made them realize how fortunate they were to have Samanera Tissa with them and
they were satisfied. The Buddha then delivered a discourse to the villagers and
the bhikkhus, and consequently, many of them attained Sotapatti Fruition.

After
the discourse, the Buddha returned to the Jetavana monastery. In the evening,
the bhikkhus said in praise of Tissa to the Buddha, “Venerable Sir,
Samanera Tissa had performed a very difficult task; he was so well provided
with gifts and offerings of all kinds here in Savatthi, yet he gave up all
these to go and live austerely in a forest monastery.” To them the Buddha
replied, “Bhikkhus, a bhikkhu, whether in town or in village, should
not live for the sake of gifts and offerings, if a bhikkhu renounces all good
prospects or worldly gain and diligently practises the dhamma in solitude, he
is sure to attain arahatship.”