WordPress database error: [Table './sarvajan_ambedkar_org/wp_comments' is marked as crashed and should be repaired]
SELECT ID, COUNT( comment_ID ) AS ccount FROM wp_posts LEFT JOIN wp_comments ON ( comment_post_ID = ID AND comment_approved = '1') WHERE ID IN (1799) GROUP BY ID 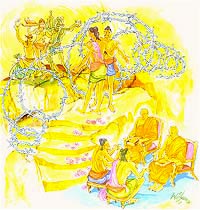 Verse 78. In The Company Of The Virtuous

Donât go around with evil friends,
with rogues do not resort.
Spend your time with noble friends,
and worthy ones consort.

The Story of Thera Channa

While residing at the Jetavana monastery, the
Buddha uttered Verse (78) of this book, with reference to Thera Channa.

Channa was the attendant who accompanied
Prince Siddhattha when he renounced the world and left the palace on horseback.
When the prince attained Buddhahood, Channa also became a bhikkhu. As a
bhikkhu, he was very arrogant and overbearing because of his close connection
to the Buddha. Channa used to say, “I came along with my Master when he left
the palace for the forest. At that time, I was the only companion of my Master
and there was no one else. But now, Sariputta and Moggallana are saying, ‘we
are the Chief Disciples,’ and are strutting about the place.”

In spite of repeated admonitions and advice
given by the Buddha, Channa did as he pleased and continued to scold and abuse
the bhikkhus. The Buddha, knowing this, said that Channa would not change
during the Buddha’s lifetime but after his demise (parinibbana) Channa
would surely change. On the eve of his parinibbana, the Buddha called
Thera Ananda to his bedside and instructed him to impose the Brahma-punishment
(Brahmadanda) to Channa; i.e., for the bhikkhus to simply ignore him and
to have nothing to do with him.

After the parinibbana of the Buddha, Channa,
learning about the punishment from Thera Ananda, felt a deep and bitter remorse
for having done wrong and he fainted three times. Then, he owned up his guilt
to the bhikkhus and asked for pardon. From that moment, he changed his ways and
outlook. He also obeyed their instructions in his meditation practice and soon
attained arahatship.

BSP emerges as an alternative to RPIs in Vidarbha polls

of Republican Party of India (RPI) in its stronghold in Vidarbha,

particularly in Nagpur have raised many eyebrows in the region after

Nagpur has been the citadel of RPI where Dr

a severe blow to their vote bank in the recent elections.

seats in the neighbouring Amravati municipal corporation and their

candidates finished second in 30 wards, giving a threat to the RPI

politicians. Moreover, the party got one seat in Akola Municipal

In Nagpur, it got 10 seats from north and south Nagpur assembly

constituenciesâpredominantly dalit areas  which are considered as RPI

citadel and dalit voters are the deciding factor for the state

has a considerable clout, the party could manage to win only seven

seats and the BSP also made its presence felt in the elections.

Milind Pakhale, chief of RPI (Ambedkar) in Nagpur, admitted that the

traditional RPI factions have lost their credibility among the voters

saffron combine which was cleverly used by the BSP in the region.

âWe are assessing the entire issue and would rectify our mistakes.

to reclaim our share of votes in the next elections,â he said.

while Prakash Ambedkar faction got two while former state Maharashtra

WordPress database error: [Table './sarvajan_ambedkar_org/wp_comments' is marked as crashed and should be repaired]
SELECT * FROM wp_comments WHERE comment_post_ID = '1799' AND comment_approved = '1' ORDER BY comment_date