Research And Practice UNIVERSITY And
THE BUDDHISTONLINE GOOD NEWS LETTER by ABHIDHAMMA RAKKHITA through http://sarvajan.ambedkar.org

Dhammapada
Verse 150 The Body Is A City Of
Bones 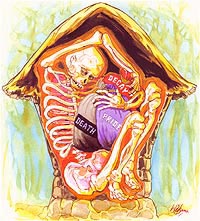 This cityâs made of bones
plastered with flesh and blood,
within are stored decay and death,
besmearing and conceit.

Explanation: This body is made of bones which form its
structure. This bare structure is plastered and filled with flesh and blood.
Inside this citadel are deposited decay, death, pride and ingratitude.

The
Eight Consciousnesses is a
classification developed in the tradition of the Yogacara school of Buddhism. They enumerate the five senses, supplemented by the mind , the “obscuration” of the mind (manas), and finally
the fundamental store-house
consciousness, which is the basis of the other seven.

All
Eight Consciousness are “aggregates” or skandha.

The
first six are the sensate “consciousnesses” plus the mind. The Yogacara School that espoused the Cittamatra
Doctrine
proffer two more consciousnesses:

The first five sense-consciousnesses along with the sixth
consciousness are identified in the Sutta Pitaka, especially the Salayatana Vagga subsection of the Samyutta Nikaya:

“Monks, I
will teach you the All. Listen & pay close attention. I will speak.”

“As you say, lord,” the monks responded.

The Blessed One
said, “What is the All? Simply the eye & forms, ear & sounds, nose
& aromas, tongue & flavors, body & tactile sensations, intellect
& ideas. This, monks, is called the All. [1] Anyone who would say,
‘Repudiating this All, I will describe another,’ if questioned on what exactly
might be the grounds for his statement, would be unable to explain, and
furthermore, would be put to grief. Why? Because it lies beyond range.”[3]

The Yogacara-school gives a detailed explanation of the
workings of the mind and the way it constructs the reality we experience. It is
“meant to be an explanation of experience, rather than a system of
ontology”.[4] Vasubandhu is considered to be
the sytematizer of Yogacara-thought.[5] Vasubandhu used the
concept of the six consciousnesses, on which he elaborated in the Triá¹ÅikaikÄ-kÄrikÄ (Treatise in Thirty
Stanzas).[6]

According
to the traditional interpretation, Vasubandhu states that there are eight
consciousnesses:

According
to Kalupahana, this classification of eight consciousnesses is based on a
misunderstanding of Vasubandhu’s Triá¹ÅikaikÄ-kÄrikÄ by later
adherents.[9][b]

The store-house consciousness accumulates all potential
energy for the mental (nama) and physical (rupa) manifestation of
one’s existence (namarupa).
It is the storehouse-consciousness which induces transmigration or rebirth,
causing the origination of a new existence

According to Yogacara teachings, the
seeds stored in the store consciousness of sentient beings are not pure.[c]

The store consciousness, while being originally immaculate
in itself, contains a “mysterious mixture of purity and defilement, good
and evil”. Because of this mixture the transformation of consciousness
from defilement to purity can take place and awakening is possible.[10]

Through the process of purification the dharma
practitioner can became a Arahat, when the four defilements of the mental
functions [d] of the
manas-consciousness are purified.[e] [f]

According to the Lankavatara Sutra and the schools of Chan/Zen Buddhism, the alaya-vjnana is
identical with the tathagata-garbha[g], and is
fundamentally pure.[11]

The equation of alaya-vjnana and tathagatagarbha was
contested. It was seen as “something akin to the Hindu notions of Ätman
(permanent, invariant self) and praká¹ti (primordial
substrative nature from which all mental, emotional and physical things
evolve).[12] The critique led by
the end of the eighth centuryto the rise of …

The logico-epistemological wing in part side-stepped the
critique by using the term citta-santÄna, “mind-stream”,
instead of Älaya-vijÃ±Äna, for what amounted to roughly the same idea. It
was easier to deny that a “stream” represented a reified self.

According to Kalupahana, instead of positing additional
consciousnesses, the Triá¹ÅikaikÄ-kÄrikÄ describes the transformations
of this consciousness:

Taking vipaka,
manana and vijnapti as three different kinds of functions, rather
than caharacteristics, and understanding vijnana itself as a function (vijnanatiti
vijnanam), Vasubandhu seems to be avoiding any form of substantialist
thinking in relation to consciousness.[14]

These transformations are threefold:[14]

Whatever, indeed,
is the variety of ideas of self and elements that prevails, it occurs in the
transformation of consciousness. Such transformation is threefold, [namely,][15]

The first transformation results in the alaya:

the resultant,
what is called mentation, as well as the concept of the object. Herein, the
consciousness called alaya, with all its seeds, is the resultant.[16]

The alaya-vijnana therefore is not an eight consciousness,
but the resultant of the transformation of consciousness:

Instead of being
a completely distinct category, alaya-vijnana merely represents the
normal flow of the stream of consciousness uninterrupted by the appearance of
reflective self-awareness. It is no more than the unbroken stream of
consciousness called the life-proces by the Buddha. It is the cognitive
process, containing both emotive and conative aspects of human experience, but
without the enlarged egoistic ermotions and dognatic graspings characteristic
of the next two transformations.[9]

The second transformation is manana,
self-consciousness or “Self-view, self-confusion, self-esteem and
self-love”.[17] According to the
Lankavatara and later interpreters it is the seventh consciousness.[18] It is
“thinking” about the various perceptions occurring in the stream of
consciousness”.[18] The alaya is
defiled by this self-interest;

[I]t can be
purified by adopting a non-substantialist (anatman) perspective and
thereby allowing the alaya-part (i.e. attachment) to dissipate, leaving
consciousness or the function of being intact.[17]

The third transformation is visaya-vijnapti, the
“concept of the object”.[19] In this
transformation the concept of objects is created. By creating these
concepts human beings become “susceptible to grasping after the
object”:[19]

Vasubandhu is
critical of the third transformation, not because it relates to the conception
of an object, but because it generates grasping after a “real object”
(sad artha), even when it is no more than a conception (vijnapti)
that combines experinece and reflection.[20]

A similar perspective is give by Walpola Rahula. According to Walpola Rahula, all the elements of the YogÄcÄra
storehouse-consciousness are already found in the PÄli Canon.[21] He writes that the
three layers of the mind (citta, manas, and vijÃ±ana) as
presented by Asaá¹ga are also mentioned in the PÄli
Canon:

Thus we can see
that ‘VijÃ±Äna’ represents the simple reaction or response of the sense organs
when they come in contact with external objects. This is the uppermost or superficial
aspect or layer of the ‘VijÃ±Äna-skandha‘. ‘Manas’ represents the aspect of its mental
functioning, thinking, reasoning, conceiving ideas, etc. ‘Citta’ which is here
called ‘ÄlayavijÃ±Äna’, represents the deepest, finest and subtlest aspect or
layer of the Aggregate of consciousness. It contains all the traces or
impressions of the past actions and all good and bad future possibilities.[22]

Although Vasubandhu had postulated
numerous Älaya-vijÃ±Äna-s, a separate one for each individual person in the
para-kalpita, this multiplicity was later eliminated in the Fa
Hsiang and Hua Yen metaphysics. These
schools inculcated instead the doctrine of a single universal and eternal
Älaya-vijÃ±Äna. This exalted enstatement of the Älaya-vijÃ±Äna is described in
the Fa Hsiang as “primordial unity”[23].

The presentation of the three natures by Vasubandhu is
consistent with the Neo-platonist views of Plotinus and his universal
‘One’, ‘Mind’, and ‘Soul’.[24]

1.
^ This idea may in some
respects be compared to the usage of the word “citta” in the agamas. In the early texts the sankhara-khandha plays some of the roles
ascribed to the store-house consciousness by later Yogacara thinkers.

2.
^ Kalupahana: “The above
explanation of alaya-vijnana makes it very different from that found in
the Lankavatara. The latter assumes alaya to be the eight
consciousness, giving the impression that it represents a totally distinct
category. Vasubandhu does not refer to it as the eight, even though his later
disciples like Sthiramati and Hsuan Tsang constantly refer to it as such”.[9]

3.
^ Each being has his own one
and only, formless and no-place-to-abide store-house consciousness. Our
“being” is created by our own store-consciousness, according to the
karma seeds stored in it. In “coming and going” we definitely do not
own the “no-coming and no-going” store-house consciousness, rather we
are owned by it. Just as a human image shown in a monitor can never be
described as lasting for any instant, since “he” is just the
production of electron currents of data stored and flow from the hard disk of
the computer, so do seed-currents drain from the store-consciousness, never
last from one moment to the next.

5.
^ By then the polluted mental
functions of the first six consciousnesses would have been cleansed. The
seventh or the manas-consciousness determines whether or not the seeds and the
contentdrain from the alaya-vijnana breaks through, becoming a
“function” to be perceived by us in the mental or physical world.

7.
^ The womb or matrix of the
Thus-come-one, the Buddha

8.
^ It is found in Chapter 7 of
the Platform
Sutra
of the Sixth Ancestor Zen Master Huineng
and other Zen masters, such as Hakuin Ekaku, in his work titled Keiso
Dokuqui[25],
and Xuyun, in his work titled Daily
Lectures at Two Ch’an Weeks, Week 1, Fourth Day.[26]

The author of the
AMF was deeply concerned with the question of the respective origins of
ignorance and enlightenment. If enlightenment is originally existent, how do we
become submerged in ignorance? If ignorance is originally existent, how is it
possible to overcome it? And finally, at the most basic level of mind, the alaya
consciousness (èè­), is there originally purity or taint? The AMF
dealt with these questions in a systematic and thorough fashion, working
through the YogacÄra concept of the alaya consciousness. The technical
term used in the AMF which functions as a metaphorical synonym for
interpenetration is “permeation” or “perfumation (è«),”
referring to the fact that defilement (ç©æ±)
“perfumates” suchness (çå¦), and suchness
perfumates defilement, depending on the current condition of the mind.[27]