WordPress database error: [Table './sarvajan_ambedkar_org/wp_comments' is marked as crashed and should be repaired]
SELECT ID, COUNT( comment_ID ) AS ccount FROM wp_posts LEFT JOIN wp_comments ON ( comment_post_ID = ID AND comment_approved = '1') WHERE ID IN (1902) GROUP BY ID 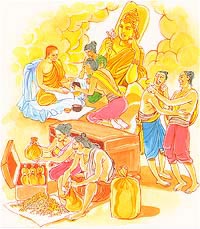 To
heavenly realms the mean donât fare,
fools magnanimity neâer acclaim,
but the one of wisdom rejoices at giving
and happy will be in future lives.

Explanation: The extreme misers do not reach the heavenly
worlds. The evil ignorant ones do not approve acts of charity. But those noble
ones approve and partake of charity. In consequence, they are happy in the next
birth.

Verse
177: Indeed, misers do not go to the abode of the devas; fools do not praise
charity; but the wise rejoice in charity and so gain happiness in the life
hereafter.

The
Story of the Unrivalled Alms-Giving

While
residing at the Jetavana monastery, the Buddha uttered Verse (177) of this
book, with reference to the unrivalled alms-giving of King Pasenadi of Kosala.

Once,
the king offered alms to the Buddha and other bhikkhus on a grand scale. His
subjects, in competition with him, organized another alms-giving ceremony on a
grander scale than that of the king. Thus, the king and his subjects kept on
competing in giving alms. Finally, Queen Mallika thought of a plan; to
implement this plan, she asked the king to have a grand pavilion built. Next,
she asked for five hundred white umbrellas and five hundred tame elephants;
those five hundred elephants were to hold the five hundred white umbrellas over
the five hundred bhikkhus. In the middle of the pavilion, they kept ten boats
which were filled with perfumes and incense. There were also two hundred and
fifty princesses, who kept fanning the five hundred bhikkhus. Since the
subjects of the king had no princesses, nor white umbrellas, nor elephants,
they could no longer compete with the king. When all preparations were made,
alms-food was offered. After the meal, the king made an offering of all the things
in the pavilion, which were worth fourteen crores.

At
the time, two ministers of the king were present. Of those two, the minister
named Junha was very pleased and praised the king for having offered alms so
generously to the Buddha and his bhikkhus. He also reflected that such
offerings could only be made by a king. He was very glad because the king would
share the merit of his good deeds with all beings. In short, the minister Junha
rejoiced with the king in his unrivalled charity. The minister Kala, on the
other hand, thought that the king was only squandering, by giving away fourteen
crores in a single day, and that the bhikkhus would just go back to the
monastery and sleep.

After
the meal, the Buddha looked over at the audience and knew how Kala the minister
was feeling. Then, he thought that if he were to deliver a lengthy discourse of
appreciation, Kala would get more dissatisfied, and in consequence would have
to suffer more in his next existence. So, out of compassion for Kala, the
Buddha delivered only a short discourse and returned to the Jetavana monastery.
The king had expected a lengthy discourse of appreciation, and so he was very
sad because the Buddha had been so brief. The king wondered if he had failed to
do something which should have been done, and so he went to the monastery.

On
seeing the king, the Buddha said, “Great King! You should rejoice that
you have succeeded in making the offering of the unrivalled charity
(asadisadana). Such an opportunity comes very rarely; it comes only once during
the appearance of each Buddha. But your minister Kala had felt that it was a
waste, and was not at all appreciative. So, if I had given a lengthy discourse,
he would get more and more dissatisfied and uncomfortable, and in consequence,
he would suffer much more in the present existence as well as in the next. That
was why I preached so briefly.”

Then
the Buddha added, “Great King! Fools do not rejoice in the charities
given by others and go to the lower worlds. The wise rejoice in other people’s
charities and through appreciation, they share in the merit gained by others Aand
go to the abode of the devas”.


WordPress database error: [Table './sarvajan_ambedkar_org/wp_comments' is marked as crashed and should be repaired]
SELECT * FROM wp_comments WHERE comment_post_ID = '1902' AND comment_approved = '1' ORDER BY comment_date