Happy About Both Victory And Defeat 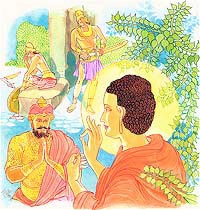 Verse 201. Happy About Both Victory And Defeat

Explanation: Victory brings hatred into being. The defeated
person lives in misery. But the person, whose mind is calm and tranquil,
lives happily as he has risen above both victory and defeat.


The Story of the Defeat of the King of Kosala

While residing at the Jetavana monastery, the Buddha uttered Verse (201) of
this book, with reference to the King of Kosala who was defeated in battle by
Ajatasattu, his own nephew.

In fighting against Ajatasattu, the King of Kosala was defeated three times.
Ajatasattu was the son of King Bimbisara and Queen Vedehi, the sister of the
King of Kosala. The King of Kosala was ashamed and very much depressed over his
defeat. Thus his lamentation: “What a disgrace! I cannot even conquer this
boy who still smells of mother’s milk. It is better that I should die.”
Feeling depressed and very much ashamed, the king refused to take food, and kept
to his bed. The news about the king’s distress spread like wild fire and when
the Buddha came to learn about it, he said, “Bhikkhus! In one who
conquers, enmity and hatred increase; one who is defeated suffers pain and
distress.”

Himalayan state Arunachal Pradesh, where around 13 per
cent of the population follows Buddhism, has got its first full-fledged
Buddhist centre after Bihar, Uttar Pradesh and Jammu and Kashmir.

The
Central Institute of Himalayan Culture Studies at Dahung in West Kameng
district, where a majority of the people follow Tibetan Buddhism, is
now a full-fledged central institute, according to its founder Tsona
Gontse Rinpoche.The institute, conceived by Rinpoche in 2000,
had received the nod of the Union Cabinet on May 26, 2010 with a project
cost estimated at Rs 9 crore and recurring annual cost of Rs 124.86
lakh.âIt began with a central government grant of just Rs 97
lakh and has since grown into a good institute to fill the vacuum in
imparting education on Buddhism,â Rinpoche said.âI had pursued
the Centre to establish such an institute considering the large number
of Buddhist population residing in the Northeast,â he said.He
pointed out that with only 25 faculty members and limited
infrastructures, the institute has so far produced two batches (18 each)
of Shastri (equivalent to BA in Buddhist Philosophy) degree holders.Besides
teaching arts and crafts for self-sufficiency and sustainable
development and preservation of ethnic identity to foster national
integrity, the institute has been inculcating an awareness on the
ecological balance and preservation of natural resources, he said.He
said the other three institutes are: Nava Nalanda Mahavihara, a deemed
university, Central University for Tibetan Studies, Sarnath, Varanasi,
and Central Institute for Higher Buddhist Studies, Leh.Rinpoche,
recognized as the 13th reincarnation of Buddhist eminent spiritual guru
in 1971 by the 14th Dalai Lama, is a monk-turned-politician and social
worker.He disclosed that 30 acres of land was provided by the
Bugun community free of cost for the institute which has been running on
an ad-hoc basis for over a decade and henceforth would be completely
funded by the MoC.The Buddhist population of the state resides
in the region’s Tawang, West Kameng, remote regions which are close to
Tibet and near the Myanmar border.Tibetan Buddhism is practised
in the first three regions while Therevada Buddhism reigns supreme in
the lives of people living near the Myanmarese border.Rimpoche earnestly believes that the institute will soon turn into a deemed university.

LUCKNOW: On the backfoot over deterioration of law and order in the
Uttar Pradesh (UP) after it came to power in March earlier this year,
the Samajwadi Party
(SP) government released crime stats in the state assembly claiming
that between March 1 to April 15, only 699 cases of murder, 263 rape
cases and 249 incidents of loot have taken place in the state.