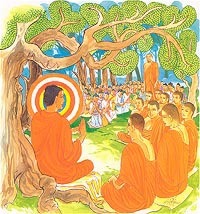 Verse 217. Beloved Of The Masses

Perfect in virtue and insight,
firm in Dhamma, knower of Truth,
dear to the peopleâs such a one
who does what should be done.

Explanation: He is endowed with discipline and insight. He
is firmly established on the laws of righteousness. He speaks the
truth. He looks after his worldly and spiritual responsibilities.
The masses adore that kind of person.

Verse 217: He who is endowed with Virtue and Insight, who is established in
the Dhamma, who has realized the Truth and performs his own duties, is loved by
all men.

The Story of Five Hundred Boys

While residing at the Veluvana monastery, the Buddha uttered Verse (217) of
this book, with reference to five hundred boys.

On one festival day, the Buddha entered the city of Rajagaha for alms-food,
accompanied by a number of bhikkhus. On their way, they met five hundred boys
going to a pleasure garden. The boys were carrying some baskets of pan-cakes but
they did not offer anything to the Buddha and his bhikkhus. But the Buddha said
to his bhikkhus, “Bhikkhus, you shall eat those pan-cakes today; the
owner is coming close behind us. We shall proceed only after taking some of
these pan-cakes.” After saying this, the Buddha and his bhikkhus rested
under the shade of a tree. Just at that moment Thera Kassapa came along, and the
boys seeing him paid obeisance to him and offered all their pan-cakes to the
thera.

The thera then told the boys, “My teacher the Exalted One is resting
underneath a tree over there accompanied by some bhikkhus; go and make an
offering of your pan-cakes to him and the bhikkhus.” The boys did as they
were told. The Buddha accepted their offering of pan-cakes. Later, when the
bhikkhus remarked that the boys were very partial to Thera Kassapa, the Buddha
said to them, “Bhikkhus, all bhikkhus who are like my son Kassapa are
liked by both devas and men. Such bhikkhus always receive ample offerings of the
four requisites of bhikkhus.”

At the end of the discourse the five hundred boys attained Sotapatti
Fruition.