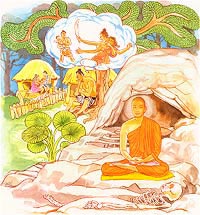 Anger conquer by amity,
evil conquer with good,
by giving conquer miserly,
with truth the speaker of falsity.

Verse 223: Conquer the angry one by not getting angry (i.e., by
loving-kindness); conquer the wicked by goodness; conquer the stingy by
generosity, and the liar by speaking the truth.

The Story of Uttara the Lay-Disciple

While residing at the Veluvana monastery, the Buddha uttered Verse (223) of
this book, with reference to Uttara, a female lay-disciple.

Uttara was the daughter of a farm labourer named Punna and his wife. Punna
worked for a rich man named Sumana, in Rajagaha. One day, Punna and his wife
offered alms-food to Thera Sariputta soon after his arising from sustained deep
mental absorption (nirodha samapatti), and as a result of that good deed they
suddenly became very rich. Punna came upon gold in the field he was ploughing,
and the king officially declared him a royal banker. On one occasion, the family
of Punna offered alms-food to the Buddha and the bhikkhus for seven days. and on
the seventh day, after hearing the Buddha’s discourse, all the three members of
the family attained Sotapatti Fruition.

Later, Uttara the daughter of Punna married the son of the rich man Sumana.
That family being non-Buddhist, Uttara did not feel happy in her husband’s home.
So, she told her father, “My father, why have you put me in this cage?
Here, I do not see any bhikkhu and I have no chance to offer anything to any
bhikkhu.” Her father felt sorry for her and sent her fifteen thousand in
cash. With this money, after getting permission from her husband, Uttara engaged
a courtesan to look to the needs of her husband. So it was arranged that Sirima,
a well-known and very beautiful courtesan, was to take her place as a wife for
fifteen days.

During that time, Uttara offered alms-food to the Buddha and the bhikkhus. On
the fifteenth day, as she was busy preparing food in the kitchen, her husband
saw her from the bedroom window and smiled, and then muttered to himself,
“How foolish she is! She does not know how to enjoy herself. She is tiring
herself out with this alms-giving ceremony!” Sirima saw him smile, and
forgetting that she was only a paid substitute wife felt very jealous of Uttara.
Being unable to control herself, Sirima went into the kitchen and got a ladleful
of boiling butter with the intention of pouring it over the head of Uttara.
Uttara saw her coming, but she bore no ill will towards Sirima. She reflected
that because Sirima had stood in for her, she had been able to listen to the
dhamma, make offerings of alms-food for fifteen days, and perform other acts of
charity. Thus she was quite thankful to Sirima. Suddenly, she realized that
Sirima had come very close to her and was going to pour boiling-hot butter over
her; so she made this asseveration: “If I bear any ill will towards Sirima
may this boiling-hot butter burn me; if I have no ill will towards her may it
not burn me.”

As Uttara had no ill will towards Sirima, the boiling butter poured over her
head by Sirima was just like cold water. Then Sirima thought the butter must
have gone cold; and as she went for another ladleful of boiling butter, the
attendants of Uttara fell upon her and beat her hard. Uttara stopped her
attendants and instructed them to rub Sirima with medicinal ointment.

Then, Sirima remembered her true position and she regretted that she had done
wrong to Uttara and asked Uttara to forgive her. To her Uttara replied, “I
have my father; I shall ask him whether I should accept your apology.”
Sirima then said that she would readily go and apologize to the rich man, the
father of Uttara. Uttara then explained to Sirima, “Sirima,. when I said
‘My father’, I did not mean my real father, who had brought me into this round
of rebirths. I was referring to my father, the Buddha, who had helped me break
the chain of rebirths, who had taught me the Dhamma, the Noble Truths.”
Sirima then expressed her wish to see the Buddha. So it was arranged that Sirima
should offer alms-food to the Buddha and the bhikkhus on the following day at
the house of Uttara.

After the meal, the Buddha was told everything that had happened between
Sirima and Uttara. Sirima then owned up that she had done wrong to Uttara and
entreated the Buddha that she should be forgiven, for otherwise Uttara would not
forgive her. The Buddha then asked Uttara how she felt in her mind when Sirima
poured boiling butter on her head, and Uttara answered, “Venerable Sir,
because I owed so much to Sirima I had resolved not to lose my temper, not to
bear any ill will towards her. I sent forth my love towards her”. The
Buddha then said, “Well done, well done, Uttara! By not bearing any ill
will you have been able to conquer one who has done you wrong through hate. By
not abusing, you should conquer one who abuses you; by being generous you should
conquer one who is stingy; by speaking the truth you should conquer one who
tells lies.”

At the end of the discourse Sirima and five hundred ladies attained Sotapatti
Fruition.