WordPress database error: [Table './sarvajan_ambedkar_org/wp_comments' is marked as crashed and should be repaired]
SELECT ID, COUNT( comment_ID ) AS ccount FROM wp_posts LEFT JOIN wp_comments ON ( comment_post_ID = ID AND comment_approved = '1') WHERE ID IN (1835) GROUP BY ID 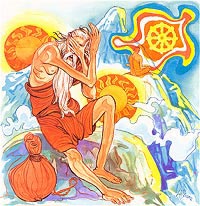 Verse
115. Life Of One Who Knows The Teaching is Noble

The Story of Theri Bahuputtika

While residing at the Jetavana monastery, the Buddha uttered
Verse (115) of this book, with reference to Bahuputtika, a mother of many
children.

Once in Savatthi, there lived a couple, with their seven sons
and seven daughters. All the children got married and the family was doing
quite well. Then, the father died and the mother kept all the property without
giving anything to the children. Her sons and daughters wanted the inheritance,
so they said, to their mother, “What benefit do we get from our property?
Can’t we make it multiply? Can’t we look after our mother?” They said such
things again and again so their mother thought that her children would look
after her, and she finally divided up the property without leaving anything for
herself.

After the division of the property, she first went to stay with
her eldest son, but her daughter-in-law complained and said, “She has come
and stayed with us, as if she has given us two shares!”, and such other
things. So, Bahuputtika went to stay with her second son, and the same things
were said. Thus, she went from one son to another, from one daughter to the
next; but none of them was willing to take her on for a long stretch of time
and none paid her due respect.

The old lady was hurt and felt bitter against her children; she
left her family and became a bhikkhuni. Because she was a mother of many
children she came to he known as Bahuputtika. Bahuputika realized that she
became a bhikkhuni only in her old age and that she must not be negligent, but
must make use of the remaining period of her life to the utmost. So, for the
whole night, she meditated on the Dhamma taught by the Buddha. The Buddha
seeing her from the Jetavana monastery, through supernormal power, sent forth
the radiance and appeared seated in front of her. Then the Buddha said to her, “The
life of one who does not practise the Dhamma taught by me is useless, even if
he were to live for a hundred years.”

WordPress database error: [Table './sarvajan_ambedkar_org/wp_comments' is marked as crashed and should be repaired]
SELECT COUNT(comment_ID) FROM wp_comments WHERE comment_post_ID = 1835 AND comment_approved = '1';

WordPress database error: [Table './sarvajan_ambedkar_org/wp_comments' is marked as crashed and should be repaired]
SELECT COUNT(*) FROM wp_comments WHERE comment_post_ID = '1835' AND comment_approved = '1'