WordPress database error: [Table './sarvajan_ambedkar_org/wp_comments' is marked as crashed and should be repaired]
SELECT ID, COUNT( comment_ID ) AS ccount FROM wp_posts LEFT JOIN wp_comments ON ( comment_post_ID = ID AND comment_approved = '1') WHERE ID IN (1821) GROUP BY ID

Research And  Practice UNIVERSITY And  BUDDHIST GOOD NEWS LETTER Through http://sarvajan.ambedkar.org
The Dhammapada Verses and Stories Dhammapada Verses
102 and 103 Kundalakesitheri Vatthu A
Dhamma-Word Is Noble Self-Conquest Is The Highest Victory 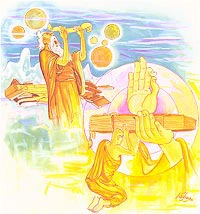 Though a thousand verses chant
composed of meaningless lines,
better the single Dhamma-line
one hears, then comes to calm.

Explanation: One may recite hundreds of verses replete with
meaningless expressions. If one recites one line of verse pregnant with wisdom,
which is pacifying, it will be more valuable and nobler. 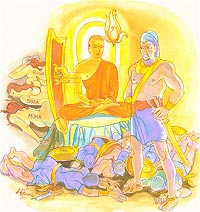 Verse 103. Self-Conquest
Is The Highest Victory

Though thousand times a thousand
in battle one may conquer,
yet should one conquer just oneself
one is the greatest conqueror.

Explanation: One may conquer a thousand men in a thousand
battles. But the person who conquers just one person, which is oneâs own self,
is the greatest conqueror.

Verse 102: Better than the recitation of a hundred verses that
are senseless and unconnected with the realization of Nibbana, is the recitation
of a single verse of the Teaching (Dhamma), if on hearing it one is calmed.

Verse 103: A man may conquer a million men in battle, but one
who conquers himself is, indeed, the greatest of conquerors.

The Story of Theri Kundalakesi

While residing at the Jetavana monastery, the Buddha uttered
Verses (102) and (103) of this book, with reference to Theri Kundalakesi.

Kundalakesi was the daughter of a rich man from Rajagaha. She
had led a very secluded life; but one day, she happened to see a thief being
led out to be killed and she immediately fell in love with him. Her parents had
to pay for the freedom of the thief, and they married her off to him. Although
she loved her husband very dearly, her husband being a thief, was only
attracted to her property and her jewels. One day, he coaxed her to put on all
her jewellery and led her to a mountain saying that he wanted to make some
offerings to the guardian spirit of the mountain because that guardian spirit
had saved his life when he was about to be killed. Kundalakesi went along with
her husband, but when they reached their destination, the thief revealed that
he intended to kill her and take her jewels. She pleaded with him to take her
jewels, but to spare her life, but it was of no avail. She then realized that
if she did not get rid of her husband, there would be no way of escape for her.
She felt she must be cautious and crafty. So she said to her husband that as
they would be together only for a few moments more, she wanted to pay respect
to him for the last time. So saying, and going round the man respectfully, she
pushed him off the crag, taking him unaware.

After this, she had no desire to return home. She left all her
jewellery hanging on a tree, and went on her way, without any idea where she
was going. She happened to come to a place of some Paribbajikas (female
wandering ascetics) and she herself became a Paribbajikas. The Paribbajikas
taught her all their one thousand problems in sophistry; being intelligent she
mastered all of them within a short time. Then her teachers told her to go out
into the world and if she should find somebody who could answer all her
questions, to become a pupil to him. Kundalakesi went throughout the length and
breadth of Jambudipa, openly challenging everyone else to compete with
her. Accordingly, she came to be known as “Jambukaparibbajika.”

On one occasion, she came to Savatthi. Before entering the city
for alms-food she made a mound of sand and stuck a branch of eugenia on it, her
usual sign of invitation to all others to take up her challenge. Thera
Sariputta took up her challenge. Kundalakesi asked him a thousand questions
and Thera Sariputta answered them all. When his turn came, he asked her just
this, “What is the one? (ekam nama kim).” Kundalakesi could
not answer, so she asked Thera Sariputta to teach her the answer to the
question. Thera Sariputta replied that she should first become a bhikkhuni;
so she became a bhikkhuni, by the name of Theri Kundalakesi. Within a
few days, she became an arahat.

Soon after this, the bhikkhus asked the Buddha, “Could it
be possible for Bhikkhuni Kundalakesi to become an arahat after listening to
the Dhamma only a little?” They also added that this lady had fought and
won a victory over her husband, who was a thief, before she became a
paribbajika.

WordPress database error: [Table './sarvajan_ambedkar_org/wp_comments' is marked as crashed and should be repaired]
SELECT COUNT(comment_ID) FROM wp_comments WHERE comment_post_ID = 1821 AND comment_approved = '1';

WordPress database error: [Table './sarvajan_ambedkar_org/wp_comments' is marked as crashed and should be repaired]
SELECT COUNT(*) FROM wp_comments WHERE comment_post_ID = '1821' AND comment_approved = '1'