WordPress database error: [Table './sarvajan_ambedkar_org/wp_comments' is marked as crashed and should be repaired]
SELECT ID, COUNT( comment_ID ) AS ccount FROM wp_posts LEFT JOIN wp_comments ON ( comment_post_ID = ID AND comment_approved = '1') WHERE ID IN (1820,1819) GROUP BY ID 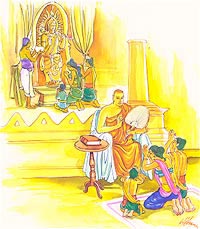 Verse 101. One Useful
Verse Is Better Than A Thousand Useless Verses

Though
a thousand verses be
composed of meaningless lines,
better the single line of verse
one hears, then comes to calm.

Explanation: A poem replete with thousands of
verses is of no value if it has no useful meaning. One single stanza pregnant
with wisdom is more valuable, if hearing it one is pacified.

Verse
101: Better than a thousand verses that are senseless and unconnected with the
realization of Nibbana, is a single verse, if on hearing it one is calmed.

While
residing at the Jetavana monastery, the Buddha uttered Verse (101) of this
book, with reference to Bahiyadaruciriya.

A group
of merchants went out to sea in a boat; their boat was wrecked at sea and all,
except one, died. The only survivor got hold of a plank and eventually came to
land at the port of Supparaka. As he was naked, he tied the plank to his body,
got hold of a bowl, and sat in a place where people could see him. Passers-by
gave him rice and gruel; some took him for an arahat and talked in praise of
him. Some brought clothes for him to wear but he refused, fearing that by
wearing clothes, people would give less to him. Besides, because some said that
he was an arahat, he mistakenly came to think that he really was one. Thus,
because he was a man of wrong views who was wearing a piece of wood as his
clothing, he came to be known as Bahiyadaruciriya.

At
about this time, Mahabrahma, who had been his friend in one of his previous
existences, saw him going astray and felt that it was his duty to put Bahiya on
the right path. So, Mahabrahma came to him in the night and said to him
“Bahiya, you are not an arahat yet, and what is more, you do not have the
qualities that make one an arahat.” Bahiya looked up at Mahabrahma and
said, “Yes, I must admit that I am not an arahat, as you have said. I now
realize that I have done a great wrong. But is there anyone else in this world
now who is an arahat?” Mahabrahma then told him that there lived in
Savatthi Gotama Buddha, an arahat, who was perfectly self-enlightened.

Bahiya,
realizing the enormity of his guilt, felt very much distressed and ran all the
way to Savatthi. Mahabrahma helped him by his supernormal power, so that the
whole stretch of one hundred and twenty yojanas was covered in one
night. Bahiya found the Buddha going on an alms-round with other bhikkhus and
respectfully followed him. He pleaded with the Buddha to teach him the Dhamma,
but the Buddha replied that since they were on an alms-round it was not yet
time for a religious discourse. And again, Bahiya pleaded, “Venerable Sir,
one cannot know the danger to your life or to my life, so please talk to me
about the Dhamma.” The Buddha knew that Bahiya had made the journey of one
hundred and twenty yojanas in one night, and also that he was overwhelmed with
joy at seeing the Buddha. That was why the Buddha did not want to talk about
the Dhamma immediately but wanted him to calm down to enable him to take in the
Dhamma properly. Still, Bahiya persistently pleaded. So, while standing on the
road, the Buddha said to Bahiya, “Bahiya, when you see an object, be
conscious of just the visible object; when you hear a sound, be conscious of
just the sound; when you smell or taste or touch something, be conscious of
just the smell, the taste or the touch; and when you think of anything, be
conscious of just the mind-object.”

After
hearing the above discourse, Bahiya attained arahatship and he asked permission
from the Buddha to join the Order. The Buddha told him to get the robes, the
bowl and other requisites of a bhikkhu. On his way to get them, he was gored to
death by a cow which was, in fact, an ogress in the likeness of a cow. When the
Buddha and the other bhikkhus came out after having had their meal, they found
Bahiya lying dead on a rubbish heap. As instructed by the Buddha, the bhikkhus
cremated the body of Bahiya and had his bones enshrined in a stupa.

Back at
the Jetavana monastery, the Buddha told the bhikkhus that Bahiya had realized
Nibbana. He also told them that as far as speed was concerned in attaining
Magga Insight (abhinna), Bahiya was the fastest, the best (Etadaggam).
The bhikkhus were puzzled by the statement made by the Buddha and they asked
him why and when Bahiya became an arahat. To this, the Buddha replied, “Bahiya
attained arahatship while he listened to my instructions given to him on the
road when we were on the alms-round.” The bhikkhus wondered how one
could attain arahatship after listening to just a few sentences of the Dhamma.
So, the Buddha told them that the number of words or the length of a speech did
not matter if it was beneficial to someone.

Then the
Buddha spoke in verse as follows:

WordPress database error: [Table './sarvajan_ambedkar_org/wp_comments' is marked as crashed and should be repaired]
SELECT COUNT(comment_ID) FROM wp_comments WHERE comment_post_ID = 1820 AND comment_approved = '1';

WordPress database error: [Table './sarvajan_ambedkar_org/wp_comments' is marked as crashed and should be repaired]
SELECT COUNT(*) FROM wp_comments WHERE comment_post_ID = '1820' AND comment_approved = '1'

WordPress database error: [Table './sarvajan_ambedkar_org/wp_comments' is marked as crashed and should be repaired]
SELECT COUNT(comment_ID) FROM wp_comments WHERE comment_post_ID = 1819 AND comment_approved = '1';