WordPress database error: [Table './sarvajan_ambedkar_org/wp_comments' is marked as crashed and should be repaired]
SELECT ID, COUNT( comment_ID ) AS ccount FROM wp_posts LEFT JOIN wp_comments ON ( comment_post_ID = ID AND comment_approved = '1') WHERE ID IN (1836) GROUP BY ID 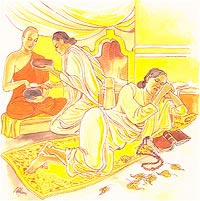 Verse
116. Never Hesitate To Do Good

Make haste towards the good
and check the mind for evil.
The one whoâs is slow to make merit
delights in the evil mind.

Explanation: In the matter of performing virtuous, meritorious
actions, be alert and act quickly. Guard the mind against evil. If one were to
perform meritorious actions hesitantly, his mind will begin to take delight in
evil things.

Verse 116: One should make haste in doing good deeds; one should
restrain one’s mind from evil; for the mind of one who is slow in doing good
tends to take delight in doing evil.

While residing at the Jetavana monastery, the Buddha uttered
Verse (116) of this book, with reference to a brahmin couple by the name of
Culekasataka.

There was once a brahmin couple in Savatthi, who had only one
outer garment between the two of them. Because of this they were also known as
Ekasataka. As they had only one outer garment, both of them could not go out at
the same time. So, the wife would go to listen to the discourse given by the
Buddha during the day and the husband would go at night. One night, as the
brahmin listened to the Buddha, his whole body came to be suffused with delightful
satisfaction and he felt a strong desire to offer the outer garment he was
wearing to the Buddha. But he realized that if he were to give away the only
outer garment he had, there would be none left for him and his wife. So he
wavered and hesitated. Thus, the first and the second watches of the night
passed. Came the third watch and he said to himself, “If I am so miserly
and hesitant, I will not be able to avoid falling to the four Lower Worlds
(apayas); I shall now offer my outer garment to the Buddha.” So saying, he
placed the piece of cloth at the feet of the Buddha and cried out “I have
won” three times.

King Pasenadi of Kosala, who was among the audience, heard those
words and ordered a courtier to investigate. Learning about the brahmin’s offering
to the Buddha, the king commented that the brahmin had done something which was
not easy to do and so should be rewarded. The king ordered his men to give the
brahmin a piece of cloth as a reward for his faith and generosity. The brahmin
offered that piece of cloth also to the Buddha and he was rewarded by the king
with two pieces of cloth. Again, the brahmin offered the two pieces of cloth to
the Buddha and he was rewarded with four. Thus, he offered to the Buddha
whatever was given him by the king, and each time the king doubled his reward.
When finally, the reward came up to thirty-two pieces of cloth, the brahmin
kept one piece for himself and another for his wife, and offered the remaining
thirty pieces to the Buddha.

Then, thinking again commented that the brahmin had truly
performed a very difficult task and so must be rewarded fittingly. The king
sent a messenger to the palace to bring two pieces of velvet cloth, each of
which was worth one hundred thousand, and gave them to the brahmin. The brahmin
made those two pieces of valuable cloth into two canopies and kept one in the
Perfumed Chamber where the Buddha slept and the other in his own house above
the place where a bhikkhu was regularly offered alms-food. When the king next
went to Jatavana monastery to pay homage to the Buddha, he saw the velvet
canopy and recognized it as the offering made by the brahmin and he was very
pleased. This time he made a reward of seven kinds in fours (sabbacatukka),
viz., four elephants, four horses, four female slaves, four male slaves, four
errand boys, four villages and four thousands in cash.

When the bhikkhus heard about this, they asked the Buddha,
“How is it that, in the case of this brahmin, a good deed done at present
bears fruit immediately?” To them the Buddha replied “If the
brahmin had offered his outer garment in the first watch of the night, he would
have been rewarded with sixteen of each kind; if he had made his offering
during the middle watch, he would have been rewarded with eight of each kind;
since he had made his offering only during the last watch of the night, he was
rewarded with only four of each kind.” So, when one wants to give in
charity, one should do so quickly; if one procrastinates, the reward comes
slowly and only sparingly. Also, if one is too slow in doing good deeds, one
may not be able to do it at all, for the mind tends to take delight in doing
evil.

WordPress database error: [Table './sarvajan_ambedkar_org/wp_comments' is marked as crashed and should be repaired]
SELECT COUNT(comment_ID) FROM wp_comments WHERE comment_post_ID = 1836 AND comment_approved = '1';

WordPress database error: [Table './sarvajan_ambedkar_org/wp_comments' is marked as crashed and should be repaired]
SELECT COUNT(*) FROM wp_comments WHERE comment_post_ID = '1836' AND comment_approved = '1'