WordPress database error: [Table './sarvajan_ambedkar_org/wp_comments' is marked as crashed and should be repaired]
SELECT ID, COUNT( comment_ID ) AS ccount FROM wp_posts LEFT JOIN wp_comments ON ( comment_post_ID = ID AND comment_approved = '1') WHERE ID IN (1967) GROUP BY ID

This sutta is widely considered as a the main reference for meditation practice.


Note: infobubbles on all Pali words 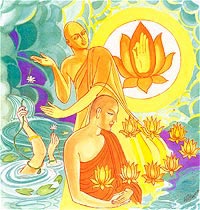 Cut off affection for oneself
as a hand a lily in the Fall.
Cultivate this peaceful path,
Nibbana by the Buddha taught.

Explanation: Just like a person plucking out a lily with oneâs
own hand, pluck out your self-attachment. Cultivate the path to Nibbana,
as advocated

Verse 285: Cut off your craving as one plucks an autumn lily with the hand.
Nibbana has been expounded on by the Buddha; cultivate that Path which leads to
it.

1. santimaggam: the Path that leads to Nibbana, i.e. the Path with Eight
Constituents.

The Story of a Thera who had been a Goldsmith

While residing at the Jetavana monastery, the Buddha uttered Verse (285) of
this book, with reference to a bhikkhu, a pupil of Thera Sariputta.

The Buddha knew that the young bhikkhu was the son of a goldsmith, and also
that he had been born in the family of goldsmiths during his past five hundred
existences. Therefore the Buddha changed the subject of meditation for the young
bhikkhu; instead of loathsomeness, he was instructed to meditate on
pleasantness. With his supernormal power, the Buddha created a beautiful lotus
flower as big as a cart-wheel and told the young bhikkhu to stick it on the
mound of sand just outside the monastery. The young bhikkhu, concentrating on
the big, beautiful, fragrant lotus flower, was able to get rid of the
hindrances. He was filled with delightful satisfaction (piti), and step by step
he progressed until he reached as far as the fourth level of mental absorption
(jhana).

The Buddha saw him from his perfumed chamber and with his supernormal power
made the flower wither instantly. Seeing the flower wither and change its
colour, the bhikkhu perceived the impermanent nature of the flower and of all
other things and beings. That led to the realization of the impermanence,
unsatisfactoriness and the insubstantiality of all conditioned things. At that
instant, the Buddha sent forth his radiance and appeared as if in person to the
young bhikkhu and instructed him to get rid of craving (tanha).

At the end of the discourse the young bhikkhu attained arahatship.


ALL ABOUT AWAKEN ONES WITH AWARENESS Australia in

Mahamevnawa Buddhist Monastery is an organization of Buddhist monasteries, of Sri Lankan origin established to benefit the spiritual development of human beings using the teachings of the Gautama Buddha.[1] Its main main monastery is in Polgahawela, Sri Lanka, and Sri Lanka is home to 35 branches of the organization. Overseas branches are in Canada,[2] USA, Australia, UK [3] and Germany.[4]

The founder and the chief Buddhist monk in charge of these monasteries is Venerable Kiribathgoda Gnanananda Thero,
who is engaged in spreading Buddhism to both local and international
communities, and in highlighting the aim of Buddhism: putting and end to
Dukkha (suffering) or attaining Nibbana.

WordPress database error: [Table './sarvajan_ambedkar_org/wp_comments' is marked as crashed and should be repaired]
SELECT COUNT(comment_ID) FROM wp_comments WHERE comment_post_ID = 1967 AND comment_approved = '1';

WordPress database error: [Table './sarvajan_ambedkar_org/wp_comments' is marked as crashed and should be repaired]
SELECT COUNT(*) FROM wp_comments WHERE comment_post_ID = '1967' AND comment_approved = '1'