WordPress database error: [Table './sarvajan_ambedkar_org/wp_comments' is marked as crashed and should be repaired]
SELECT ID, COUNT( comment_ID ) AS ccount FROM wp_posts LEFT JOIN wp_comments ON ( comment_post_ID = ID AND comment_approved = '1') WHERE ID IN (4742) GROUP BY ID

Either get the complete voters list from BSP HQ
Bahujan Bhavan, No. 23 Cockburn Road,
Near Cantonment Railway Station, Bangalore -560051
or
visit:
http://ceokarnataka.kar.nic.in/

Points to awaken the people of this country to save Democracy:

Only when Mayawati raised the question of EVMs the whole world got awakened.

BJP can go to any extant of debaucheryï»¿

He
was kept under house arrest for 48 hours for Rs 600 crores wealth. But
he did not resign like Ms Mayawati. No self respect Now the Congress is
planning to make him the CM of Karnataka so that he can amaze more
crores of rupees without any political or self morality.

Ms Mayawati resigned the Delhi Parliament to come to Karnataka Peoples Parliament as Democracy is in Danger.

Only two persons resigned from the Parliament to save democracy

1
Dr BR Ambedkar who was defeated by the Congress by rigging the
elections. Thousands of SC/STs names were removed from the Voters list
to defeat him.

He
was kept under house arrest for 48 hours for Rs 600 crores wealth. But
he did not resign like Ms Mayawati. No self respect Now the Congress is
planning to make him the CM of Karnataka so that he can amaze more
crores of rupees without any political or self morality.

Ms Mayawati resigned the Delhi Parliament to come to Karnataka Peoples Parliament as Democracy is in Danger.

Only two persons resigned from the Parliament to save democracy

1
Dr BR Ambedkar who was defeated by the Congress by rigging the
elections. Thousands of SC/STs names were removed from the Voters list
to defeat him.

2
Ms Mayawati saying why should I be a member when I am not able to speak
for the people. I have not come here to get contracts or to make money.

Mayawati
quit the Delhi Parliament  seat and will come to Karnataka Peoples
Parliament on 26-Sept 2017 as part of her entire nation visit from
October 2017  to February 2018. 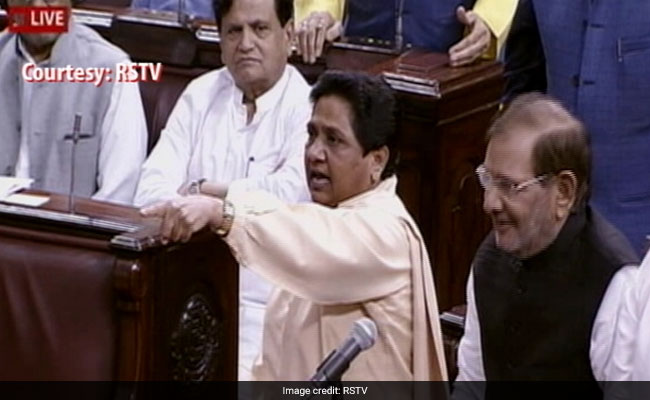 The Bahujan Samaj Party chief met Vice President Hamid Ansari, who is
chairman of the Rajya Sabha, this evening to hand over her resignation.

Declaring she would quit if she was not allowed to speak on what she called frequent attacks on SC/STs in Uttar Pradesh.

The 61-year-old met Vice President Hamid Ansari, chairman of the
Rajya Sabha, to hand over her three-page resignation letter
and said she had detailed in it her reasons for quitting. “I simply
wanted the Rajya Sabha Chair to pay attention to atrocities against the
less fortunate sections of the society, especially SC/STs. And as a
representative, when I’m not being allowed to speak for them, I have no
choice but to resign,” said Mayawati, as she
asked in Parliament to limit her speech to three minutes.

Mukhtar
Abbas Naqvi and other BJP MPs were preventing her to speak on the
issue.She was MP in Lok Sabha for 3 terms and 3 terms in Rajya sabha and
ruled Uttar Pradesh for 4 times.Such an eminent leader was prevented by
PJ Kurian and the BJP MPs and the speaker never attempted to stop the
BJP MPs violating the tradition followed in the Parliament.

MD Faraz3 months ago
EVM should be banï»¿ned

Toamit Chaudhary3 months ago
She is absolutely rightâ¦according her E.V.M ought to be banâ¦!! She is the God of  societyâ¦.ï»¿

Ms
Mayawati wanted to discuss the atrocities on SC/STs/OBCs/Religious
Minorities and the women after serving notice. On the 1st day of the
sesson, she was prevented to speak on the issue.

So she resigned her seat which is not done by any of the parliamentarians of other parties.

Revert back to paper ballots to save Democracy as the fraud EVMs
negates the Universal Adult Franchise provided by our Modern
Constitution.

The ex CJI Sathasivam had committed a grave error
of judgement by ordering that the EVMs could be replaced in a phased
manner as suggested by the ex CEC Sampath. Only 8 out of 543 Lok Sabha
seats in 2014 were replaced that helped the Murderer of democratic
institutions (Modi) to gobble the Master Key. In Uttar Pradesh Assembly
elections only 20 out of 403 seats were replaced helping the BJP (Bahuth
Jiyadha Psychopaths) to corner power. The very fact that the EVMs had
to be replaced is itself a clear proof that the EVMs are tamperable. 80
democracies have discorded these fraud EVMs. The ex CJI never ordered
for Paper Ballots to be used till the entire EVMs were replaced.

The Supreme Court must order for dissolving the Central and the state
governments selected by these fraud EVMs and go for fresh polls with
paper ballots. Then the BJP will not even get 1% of the votes polled. In
Uttar Pradesh Panchayat Polls with paper ballots the BSP won majority
of the seats while it lost in 2014 Lok Sabha elections and the Assembly
elections which is nothing but a practice of untouchability requiring
punishment to the ex CJI, ex CEC, Modi and Yogi under atrocities act to
save equality, liberty and fraternity as enshrined in our Modern
Constitution.

Amit Kumar
How does “no right to decide how to vote” even come into the picture? Why not just say that the ruling party is afraid of fair
elections via VVPAT?

This govt is too suspicious with his approach. VVPAT will further increase the transparency.

The elections itself are costly affairs.So why worry over spending
pittance on Vvpat units.Is it not a diabolic idea to continue in
power for ever?

Murderer of democratic institutions (Modi) can spend 3000 crore for a
statue of an anti-Modern Constitution leader. But not for replacing the
fraud EVMs.

Neena Sharma
Sorry GOI the voters will decide how they want to vote.
Had the Govt been transparent in its responses to voters suspicions
about the invincibility of these EVM’s this situation may not have
arisen. But the ridiculous hackathon condition the EC laid down before
hacking experts in Delhi this year, telling them that they could not
touch the machines nor would the software be explained leaves us with no
choice but to view the Govt with extreme suspicion. In California last
month the authorities allowed hackers to inspect their EVM”s and also
explained the soft ware after which the hackers hacked the machines in
minutes ! So these machines are hackable so VVPATS must be mandated or
no elections allowed to be held.
This is final , this Govt will have to bend or face large scale boycott…

The source code of the software is in the hands of people from outside
our country. Even the EC are not accessible to the source code which has
to be made public in a Democracy.

The Supreme Court must order for making the source code of the software public to save Democracy.

That’s pretty much worrisome, to put it rather mildly.
And it also amounts to negating the commitment made by the EC to use
VVPAT machines with all EVMs in the coming Lok Sabha poll (ref., e.g.:
‘VVPAT machines at every polling booth by 2019 general elections says
EC’ dtd. Mar 17, 2017 at <http://www.hindustantimes.com/â¦/story-trqNckD8KyhuOZbdJiun9â¦>),
in compliance with the directive issued by the Supreme Court on the
subject issue earlier (ref.: “The Supreme Court on Tuesday [October 8
2013] asked the Election Commission to introduce in a phased manner the
paper trail in Electronic Voting Machines (EVMs) for the 2014 Lok Sabha
elections, saying “it is an indispensable requirement of free, fair and
transparent” polls which will restore confidence of the voters.” at <http://www.ndtv.com/â¦/supreme-court-asks-election-commissioâ¦>,
also “From the materials placed by both the sides, we are satisfied
that the âpaper trailâ is an indispensable requirement of free and fair
elections. The confidence of the voters in the EVMs can be achieved only
with the introduction of the âpaper trailâ” at <http://judis.nic.in/supremecourt/imgs1.aspx?filename=40874>).
***It clearly reeks of malafide intentions.***

imran479
Aug 10
They will change their mind once BJP starts to lose elections.

arshervani
Aug 10
Yes, Imran Saheb,
Just as the other “they” first boasted that “They” have brought EVMs
and kept extolling its magnificence but changed their minds when
they started losing.
Netas are netas, the same johnny is this side today, that side tomorrow.
No use calling anyone communal or secular even.
There is hardly anyone who is even communal honestly, genuinely.
Where to look for someone “secular” honestly, genuinely.
That’s why I like NOTA better than Neta.
Exceptions, as always, only prove the rule.
Rashid

https://news.webindia123.com/â¦/â¦/India/20100828/1575461.html
RSS favours paper ballots, EVMs subjected to public scrutiny
Joining the controversy regarding the reliablity of Electronic Voting
Machines (EVMs) which have been questioned by political parties, the RSS
today asked the Election Commission (EC) to revert back to tried and
tested paper ballots and subject EVMs to public scrutiny whether these
gadgets are tamper proof. In an editorial titled ‘Can we trust our
EVMs?’, The Organiser, the RSS mouthpiece, noted it was a fact that till
date an absolutely tamper-proof machine had not been invented and
credibility of any system depends on ‘transparency, verifiability and
trustworthiness’ than on blind and atavistic faith in its infallibility.
The issue is not a ‘private affair’ and it involves the future of
India. Even if the EVMs were genuine, there was no reason for the EC to
be touchy about it, the paper commented. The Government and the EC can’t
impose EVMs as a fait accompli on Indian democracy as the only option
before the voter. There were flaws like booth capturing, rigging, bogus
voting, tampering and ballot paper snatching in the ballot paper system
of polling leading the country to switch over to the EVMs and all these
problems were relevant in EVMs too. Rigging was possible even at the
counting stage. What made the ballot papers voter-friendly was that all
aberrations were taking place before the public eye and hence open for
corrections whereas the manipulations in the EVMs is entirely in the
hands of powers that be and the political appointees manning the sytem,
the paper commented. The EVM has only one advantage — ’speed’ but that
advantage has been undermined by the staggered polls at times spread
over three to four months. ‘’This has already killed the fun of the
election process,'’ the paper noted. Of the dozen General Elections held
in the country, only two were through the EVMs and instead of
rationally addressing the doubts aired by reputed institutions and
experts the Government has resorted to silence its critics by
‘intimidation and arrests on false charges’, the paper observed,
recalling the arrest of Hyederabad-based technocrat Hari Prasad by the
Mumbai Police. Prasad’s research has proved that the EVMs were
‘vulnerable to fraud’. The authorities want to send a message that
anybody who challenges the EC runs the risk of persecution and
harassment, the RSS observed. Most countries around the world looked at
the EVMs with suspicion and countries like the Netherlands, Italy,
Germany and Ireland had all reverted back to paper ballots shunning EVMs
because they were ‘easy to falsify, risked eavesdropping and lacked
transparency’. Democracy is too precious to be handed over to whims or
an opaque establishment and network of unsafe gizmos. ‘’For the health
of Indian democracy it is better to return to tried and tested methods
or else elections in future can turn out to be a farce,'’ the editorial
said.

Voters Can’t Decide Manner of Casting Votes: Govt to SC on VVPAT Machines
Submitting its affidavit, the Union Law Ministry said that VVPAT could be used just as a
news18.com

WordPress database error: [Table './sarvajan_ambedkar_org/wp_comments' is marked as crashed and should be repaired]
SELECT COUNT(comment_ID) FROM wp_comments WHERE comment_post_ID = 4742 AND comment_approved = '1';

WordPress database error: [Table './sarvajan_ambedkar_org/wp_comments' is marked as crashed and should be repaired]
SELECT COUNT(*) FROM wp_comments WHERE comment_post_ID = '4742' AND comment_approved = '1'