ALMOST EVERY FRAUD involves
VICTIM
sending âCASHâ money to a
Fraudster/Scammer.
ABSOLUTELY DO NOT send any money
using / Moneygram.
Always deal ONLY locally by meeting
the seller/buyer in person.
READ and UNDERSTAND the methods used
by Fraudsters in the link above.

ONLINE TRAINING ON PRECEPTS AND TRADE-75

Buddhist Microeconomics at the Ultimate
Level

When looking for Buddhist
economic principles to take us beyond the material comfort and economic
security of Chapter 3 and the mental wellbeing of Chapter 4, to attain inner
freedom (especially from the defilement of grasping in the mind). What becomes
important is economic values and practices which lead to the uprooting of
sense-pleasure from the mind. Before looking at microeconomics at the ultimate
level, it is first necessary to examine the meaning of the word ’sensuality’.

Sense pleasure means
indulgence of the things that are attractive to the senses and it can be broken
down into two components:

Sense
objects have sometimes been compared to an unignited match head. The mental
components of desire are like the striker on a matchbox. Only when sensual
objects and their mental components come into contact with one another do we
run the risk of becoming slave to our desires. In any case, it should be
understood that the sensually tempting things of the world are not the reason
for greed — they are only part of the story. The sensual grasping comes from
the minds of men. Without the grasping in the human mind the attractive things
of the world never caused any harm to anyone. Once knowing the danger that lies
with the sensual grasping in the mind, the wise do their best to eradicate all
trace of sensual grasping from the mind.

Practically speaking, to
eradicate grasping from the mind, one must follow the advice the Buddha gave to
Bahiya Daaruciiriya (DhA.ii.209ff.):

By
doing this, one’s mind will always be without object-side sensuality [kaamavatthu].
By not being entranced by a perception, the sense-side sensuality has no chance
to flare up. The opposite would be the case if one becomes elated by the
pleasing things one senses, becoming entranced thereby and allowing the emotion
of grasping to hijack the ethical discretion of your mind.

The Harm of Sensuality

It follows that those whose mind is heavily under the influence of sensual
grasping and craving for sensual pleasures will soon have reasons to take advantage
of themselves or others or both.

For those whose mind is
overrun with grasping, killing, stealing, sexually molesting others and lying
is not very far away. However, if our mind is free of sensual grasping, there
will be no harmful thoughts to generate harmful speech or actions for us. This
is the reason why the Buddha taught monks and laypeople alike:

When
everyone is overrun with the defilements of greed the whole of the time, it
causes people to seek endlessly for happiness from sensual objects — this is
why such people are referred to as ‘consumers of sense pleasure’ [kaamabhogii].
In such a search there is a never-ending work to do — whether it be
acquisition, conservation or spending of wealth throughout one’s life.


From the Kaamabhogii Sutta,
it can thus be concluded that the Buddha enumerated ten different sorts of
attitude subscribed to by people as shown in the following table:

If a person can acquire their wealth solely by scrupulous means, and if they
can manage to derive pleasure from that wealth, while at the same time
disbursing their wealth for others and donating it for meritorious work, and
also having the insight to see the harm of sense-desire and the importance of
extricating oneself from it, this is the crÃ¨me-de-la-crÃ¨me of the ten
attitudes.

Wealth
is lost nothing is lost 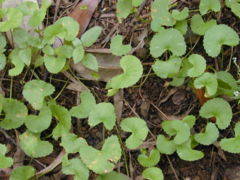 Habitat : Grown in waterlogged places throughout
.

Uses : : It is Tonic,
Diuretic and Alterative. It is used in treatment of leporasy and known to
ameliorate the symptoms of the disease and improves general health of the
patient. It is a brain tonic and stimulates hair growth.
Centella asiatica is a small herbaceous annual
plant of the family Apiaceae, native to .
Common names include Gotu Kola, Asiatic Pennywort, Antanan, Pegaga, and Brahmi
(although this last name is shared with Bacopa monnieri and other herbs). It is
used as a medicinal herb in Ayurvedic medicine and traditional Chinese
medicine.

The stems are slender, creeping stolons, green
to reddish green in color, interconnecting one plant to another. It has
long-stalked, green, reniform leaves with rounded apices which have smooth
texture with palmately netted veins. The leaves are born on pericladial
petioles, around 20 cm. The rootstock consists of rhizomes, growing vertically
down. They are creamish in color and covered with root hairs.

The flowers are pinkish to red in color, born in
small, rounded bunches (umbels) near the surface of the soil. Each flower is
partly enclosed in two green bracts. The hermaphrodite flowers are minute in
size (less than 3 mm), with 5-6 corolla lobes per flower. Each flower bears
five stamens and two styles.

The crop matures in three months and the whole
plant, including the roots, is harvested manually. When eaten raw as a salad
leaf, pegaga is thought to help maintain youthfulness. A decoction of juice
from the leaves is thought to relieve hypertension. This juice is also used as
a general tonic for good health. A poultice of the leaves is also used to treat
open sores. Interestingly, chewing on the plant for several hours induces
entheogenic meditation, similar to the effects of salvia divinorum, although
this practice is widely considered dangerous, as it can cause temporomandibular
joint pains.

Health is lost something is lost


A BLUE PRINT FOR LIFE

THE WAY OF  TOLERANCE

The
Subcommentry on Flower Ornament Sutra

Buddha, and all sentient beings are all the same.â Mutual

respect, forgiveness, by all peoples and nations. Because we

all reside on this earth, we should all have the same hopes
of

living together and promoting the idea of equality between

the Buddha and sentient beings, the sage and the oerdinary,

and oneself and others, and eliminate divisions between

peoples and nations. Everyone should adopt the international

perspective of âextending in the ten directions and

throughout the three time periods, âtakingâ the world as a

single familyâ as their starting point. This will allow
everyone

to embrace the Dhamma realms and become a citizen of the

world, protecting the environment and caring for all

resources. By treating others as we would like to be
treated,

we can awaken ourselves as well as others, improve  life

and have faith, form good affinities with all sentient
beings,

in this way can we promote world peace together.


Precepts (Character, morality
self-discipline) is lost everything is lost


Best Friends
[The Power of Friendship]

Before the time of this story, people in used to say that there would never be a time when an
elephant and a dog would be friends. Elephants simply did not like dogs, and
dogs were afraid of elephants.

When dogs are frightened by those who are
bigger than they are, they often bark very loudly, to cover up their fear. When
dogs used to do this when they saw elephants, the elephants would get annoyed
and chase them. Elephants had no patience at all when it came to dogs. Even if
a dog were quiet and still, any nearby elephant would automatically attack him.
This is why everybody agreed that elephants and dogs were ‘natural enemies’,
just like lions and tigers, or cats and mice.

Once upon a time, there was a royal bull
elephant, who was very well fed and cared for. In the neighbourhood of the
elephant shed, there was a scrawny, poorly fed, stray dog. He was attracted by
the smell of the rich sweet rice being fed to the royal elephant. So he began
sneaking into the shed and eating the wonderful rice that fell from the
elephant’s mouth. He liked it so much, that soon he would eat nowhere else.
While enjoying his food, the big mighty elephant did not notice the tiny shy
stray dog.

By eating such rich food, the once underfed
dog gradually got bigger and stronger, and became very handsome looking. The
good-natured elephant began to notice him. Since the dog had gotten used to
being around the elephant, he had lost his fear. So he did not bark at him.
Because he was not annoyed by the friendly dog, the elephant gradually got used
to him.

Slowly they became friendlier and friendlier
with each other. Before long, neither would eat without the other, and they
enjoyed spending their time together. When they played, the dog would grab the
elephant’s heavy trunk, and the elephant would swing him forward and backward,
from side to side, up and down, and even in circles! So it was that they became
‘best friends’, and wanted never to be separated.

Then one day a man from a remote village, who
was visiting the city, passed by the elephant shed. He saw the frisky dog, who
had become strong and beautiful. He bought him from the mahout, even though he
didn’t really own him. He took him back to his home village, without anyone
knowing where that was.

Of course, the royal bull elephant became very
sad, since he missed his best friend the dog. He became so sad that he didn’t
want to do anything, not even eat or drink or bathe. So the mahout had to
report this to the king, although he said nothing about selling the friendly
dog.

It just so happened that the king had an
intelligent minister who was known for his understanding of animals. So he told
him to go and find out the reason for the elephant’s condition.

The wise minister went to the elephant shed.
He saw at once that the royal bull elephant was very sad. He thought,
“This once happy elephant does not appear to be sick in any way. But I
have seen this condition before, in men and animals alike. This elephant is
grief-stricken, probably due to the loss of a very dear friend.”

Then he said to the guards and attendants,
“I find no sickness. He seems to be grief-stricken due to the loss of a
friend. Do you know if this elephant had a very close friendship with
anyone?”

They told him how the royal elephant and the
stray dog were best friends. “What happened to this stray dog?” asked
the minister. He was taken by an unknown man,” they replied, “and we
do not know where he is now.”

The minister returned to the king and said,
“Your majesty, I am happy to say your elephant is not sick. As strange as
it may sound, he became best friends with a stray dog! Since the dog has been
taken away, the elephant is grief-stricken and does not feel like eating or
drinking or bathing. This is my opinion.”

The king said, “Friendship is one of
life’s most wonderful things. My minister, how can we bring back my elephant’s
friend and make him happy again?”

“My lord,” replied the minister,
“I suggest you make an official announcement, that whoever has the dog who
used to live at the royal elephant shed, will be fined.”

This was done, and when the villager heard of
it, he released the dog from his house. He was filled with great happiness and
ran as fast as he could, straight back to his best friend, the royal bull
elephant.

The elephant was so overjoyed, that he picked
up his friend with his trunk and sat him on top of his head. The happy dog
wagged his tail, while the elephant’s eyes sparkled with delight. They both
lived happily ever after.

Meanwhile, the king was very pleased by his
elephant’s full recovery. He was amazed that his minister seemed to be able to
read the mind of an elephant. So he rewarded him appropriately.

The moral is: Even ‘natural enemies’ can become ‘best friends.’