WordPress database error: [Table './sarvajan_ambedkar_org/wp_comments' is marked as crashed and should be repaired]
SELECT ID, COUNT( comment_ID ) AS ccount FROM wp_posts LEFT JOIN wp_comments ON ( comment_post_ID = ID AND comment_approved = '1') WHERE ID IN (1737) GROUP BY ID

By energy and heedfulness,

by taming and by self-control,

the one whoâs wise should make as isle

no flood can overwhelm.

Centered, mindful, alert, the Awakened One’s disciple discerns
searches, how searches come into play, where they cease, & the path to their
ending. With the ending of searches, a monk free of want is totally unbound.
FREE ONLINE eNÄlandÄ Research & Practice UNIVERSITY & BUDDHIST
GOOD NEWS
LETTER through
Through http://sarvajan.ambedkar.org
THE
BUDDHIST ON LINE GOOD NEWS LETTER COURSE PROGRAM

LESSON
484
Practice
a Sutta a Day Keeps Dukkha Away 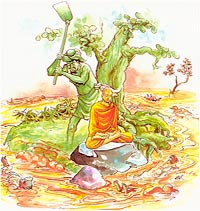 
By energy and heedfulness,
by taming and by self-control,
the one whoâs wise should make as isle
no flood can overwhelm.


Explanation: The whole world is full of defilements. The sensualities
of life are a vast and forceful flood. But the wise person builds
steadfastly for himself an Island that cannot be washed away by those
vast floods. The Island is built of steadfastness, mindfulness, restraint
and discipline. Once steadily established on that island, the flood
cannot overwhelm the wise.
Dhammapada Verse 25
Culapanthaka Vatthu

Verse 25: Through diligence, mindfulness, discipline (with regard to moral
precepts), and control of his senses, let the man of wisdom make (of himself) an
island which no flood can overwhelm.


1. dipam kayiratha medhavi = island + make + the wise,
meaning let the man of wisdom make an island. The ‘island’, in this context
stands for arahatship. Arahatship is here linkened to an island because it
enables one to escape from the stormy waters of Samsara (round of rebirths).

2. ogho: flood or torrent. It is used metaphoxically of
evils or passions which overwhelm humanity.

While residing at the Veluvana monastery, the Buddha uttered Verse (25) of
this book, with reference to Culapanthaka, a grandson of a banker of Rajagaha.

The banker had two grandsons, named Mahapanthaka and Culapanthaka.
Mahapanthaka, being the elder, used to accompany his grandfather to listen to
religious discourses. Later, Mahapanthaka joined the Buddhist religious Order
and in course of time became an arahat. Culapanthaka followed his brother and
became a bhikkhu. But, because in a previous existence in the time of Kassapa
Buddha, Culapanthaka had made fun of a bhikkhu who was very dull, he was born a
dullard in the present existence. He could not even memorize one verse in four
months. Mahapanthaka was very disappointed with his younger brother and even
told him that he was not worthy of the Order.

About that time, Jivaka came to the monastery to invite the Buddha and the
resident bhikkhus to his house for a meal. Mahapanthaka, who was then in charge
of assigning the bhikkhus to meal invitations, left out Culapanthaka from the
list. When Culapanthaka learnt about this he felt very much frustrated and
decided that he would return to the life of a householder. Knowing his
intention, the Buddha took him along and made him sit in front of the Gandhakuti
hall. He then gave a clean piece of cloth to Culapanthaka and told him to sit
there facing east and rub the piece of cloth. At the same time he was to repeat
the word “Rajoharanam“, which means “taking on
impurity.” The Buddha then went to the residence of Jivaka, accompanied by
the bhikkhus.

Meanwhile, Culapanthaka went on rubbing the piece of cloth, all the time
muttering the word “Rajoharanam“. Very soon, the cloth became
soiled. Seeing this change in the condition of the cloth, Culapanthaka came to
realize the impermanent nature of all conditioned things. From the house of
Jivaka, the Buddha through supernormal power learnt about the progress of
Culapanthaka. He sent forth his radiance so that (to Culapanthaka) the Buddha
appeared to be sitting in front of him, saying:

“It is not the piece of cloth alone that is made dirty by the dust;
within oneself also there exist the dust of passion (raga), the dust of ill will
(dosa), and the dust of ignorance (moha), i.e., the ignorance of the Four Noble
Truths. Only by removing these could one achieve one’s goal and attain
arahatship”. Culapanthaka got the message and kept on meditating and in
a short while attained arahatship, together with Analytical Insight. Thus,
Culapanthaka ceased to be a dullard.

At the house of Jivaka, they were about to pour libation water as a mark of
donation; but the Buddha covered the bowl with his hand and asked if there were
any bhikkhus left at the monastery. On being answered that there were none, the
Buddha replied that there was one and directed them to fetch Culapanthaka from
the monastery. When the messenger from the house of Jivaka arrived at the
monastery he found not only one bhikkhu, but a thousand identical bhikkhus. They
all have been created by Culapanthaka, who by now possessed supernormal powers
The messenger was baffled and he turned back and reported the matter to Jivaka.
The messenger was sent to the monastery for the second time and was instructed
to say that the Buddha summoned the bhikkhu by the name of Culapanthaka. But
when he delivered the message, a thousand voices responded, “I am
Culapanthaka.” Again baffled, he turned back for the second time. Then he
was sent to the monastery, for the third time. This time, he was instructed to
get hold of the bhikkhu who first said that he was Culapanthaka. As soon as he
got hold of that bhikkhu all the rest disappeared, and Culapanthaka accompanied
the messenger to the house of Jivaka. After the meal, as directed by the Buddha,
Culapanthaka delivered a religious discourse confidently and bravely, roaring
like a young lion.

Later, when the subject of Culapanthaka cropped up among the bhikkhus, the
Buddha said that one who was diligent and steadfast in his striving would
certainly attain arahatship.

WordPress database error: [Table './sarvajan_ambedkar_org/wp_comments' is marked as crashed and should be repaired]
SELECT COUNT(comment_ID) FROM wp_comments WHERE comment_post_ID = 1737 AND comment_approved = '1';

WordPress database error: [Table './sarvajan_ambedkar_org/wp_comments' is marked as crashed and should be repaired]
SELECT COUNT(*) FROM wp_comments WHERE comment_post_ID = '1737' AND comment_approved = '1'