WordPress database error: [Table './sarvajan_ambedkar_org/wp_comments' is marked as crashed and should be repaired]
SELECT ID, COUNT( comment_ID ) AS ccount FROM wp_posts LEFT JOIN wp_comments ON ( comment_post_ID = ID AND comment_approved = '1') WHERE ID IN (1768) GROUP BY ID 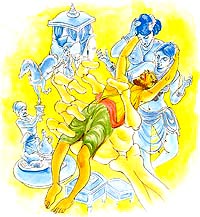 Verse 48. Attachment To
Senses If Folly


For one
of desires insatiate
who gathers only pleasure-flowers,
for one who has a clinging mind
Death the sovereign overpowers.


Explanation:
Those who pursue worldly pleasures are like garland-makers who pick flowers
here and there in the garden according to their preference. Those given to
pleasures of the senses are not satisfied. They seek still more. In consequence
of their endless pleasure-seeking they come under the spell of Antaka, or
âender of allâ, i.e. death.


Verse
48: Like one who picks and chooses flowers, a man who has his mind attached to
sensual pleasures and is insatiate in them is over powered by Death.

The
Story of Patipujika Kumari


While
residing at the Jetavana monastery, the Buddha uttered Verse (48) of this book,
with reference to Patipujika Kumari.


Patipujika
Kumari was a lady from Savatthi. She married at the age of sixteen and had four
sons. She was a virtuous as well as a generous lady, who loved to make
offerings of food and other requisites to the bhikkhus. She would often go to
the monastery and clean up the premises, fill the pots and jars with water and
perform other services. Patipujika also possessed Jatissara Knowledge
through which she remembered that in her previous existence she was one of the
numerous wives of Malabhari, in the deva world of Tavatimsa. She also
remembered that she had passed away from there when all of them were out in the
garden enjoying themselves, plucking and picking flowers. So, every time she
made offerings to the bhikkhus or performed any other meritorious act, she
would pray that she might be reborn in the Tavatimsa realm as a wife of
Malabhari, her previous husband.


One
day, Patipujika fell ill and passed away that same evening. As she had so
ardently wished, she was reborn in Tavatimsa deva world as a wife of Malabhari.
As one hundred years in the human world is equivalent to just one day in
Tavatimsa world, Malabhari and his other wives were still in the garden
enjoying themselves and Patipujika was barely missed by them. So, when she
rejoined them, Malabhari asked her where she had been the whole morning. She
then told him about her passing away from Tavatimsa, her rebirth in the human
world, her marriage to a man and also about how she had given birth to four
sons, her passing away from there and finally her return to Tavatimsa.


When
the bhikkhus learned about the death of Patipujika, they were stricken with
grief. They went to the Buddha and reported that Patipujika, who was offering
alms-food to them early in the morning, had passed away in the evening. To them
the Buddha replied that the life of beings was very brief; and that before they
could hardly be satiated in their sensual pleasures, they were overpowered by
Death.


Then
the Buddha spoke in verse as follows:

WordPress database error: [Table './sarvajan_ambedkar_org/wp_comments' is marked as crashed and should be repaired]
SELECT COUNT(comment_ID) FROM wp_comments WHERE comment_post_ID = 1768 AND comment_approved = '1';

WordPress database error: [Table './sarvajan_ambedkar_org/wp_comments' is marked as crashed and should be repaired]
SELECT COUNT(*) FROM wp_comments WHERE comment_post_ID = '1768' AND comment_approved = '1'