WordPress database error: [Table './sarvajan_ambedkar_org/wp_comments' is marked as crashed and should be repaired]
SELECT ID, COUNT( comment_ID ) AS ccount FROM wp_posts LEFT JOIN wp_comments ON ( comment_post_ID = ID AND comment_approved = '1') WHERE ID IN (1771) GROUP BY ID


Practice a Sutta a Day
Keeps Dukkha Away 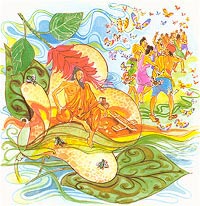 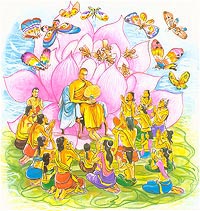 Verse 52. Good Words Profit Only Those Who Practise


Just as a gorgeous
blossom
brilliant and sweet-scented,
so fruitful the well-spoken words
of one who acts as well.


Explanation: A flower
may be quite attractive, alluring and possessing a brilliant hue. In addition,
it may be also full of fragrance. So is the person who is well spoken and
practises what he preaches. His words are effective and they are honoured.

Verse 51. Good Words Attract Only Those Who Practice


Just as a gorgeous
blossom
brilliant but unscented,
so fruitless the well-spoken words
of one who does not act.


Explanation: A flower
may be quite attractive, alluring. It may possess a brilliant hue. But, if it
is devoid of fragrance, and has no scent, it is of no use. So is the well
spoken word of him who does not practice it. It turns out to be useless.


Verse 51: Just as a
beautiful flower, lacking in scent, cannot give the wearer the benefit of its
scent, so also, the well-preached words of the Buddha cannot benefit one who
does not practise the Dhamma.


Verse 52: Just as a
flower, beautiful as well as fragrant, will give the wearer the benefit of its
scent, so also, the well-preached words of the Buddha will benefit one who
practises the Dhamma.

The Story of
Chattapani, a Lay Disciple


While residing at the
Jetavana monastery, the Buddha uttered Verses (51) and (52) of this book, with
reference to the lay disciple Chattapani and the two queens of King Pasenadi of
Kosala.


A lay disciple named
Chattapani who was an anagami* lived in Savatthi. On one occasion, Chattapani
was with the Buddha at the Jetavana monastery respectfully and attentively
listening to a religious discourse, when King Pasenadi also came to the Buddha.
Chattapani did not stand up because he thought that by standing up, it might
mean that he was paying respect to the king, but not paying due respect to the
Buddha. The king took that as an insult and was very much offended. The Buddha
knew exactly how the king was feeling; so he spoke in praise of Chattapani, who
was well-versed in the Dhamma and had also attained the Anagami Fruition. On
hearing this, the king was impressed and favourably inclined towards Chattapani.


When the king next met
Chattapani he said, “You are so learned; could you please come to the
palace and give lessons of the Dhamma to my two queens?” Chattapani
declined but he suggested that the king should request the Buddha to assign a
bhikkhu for this purpose. So, the king approached the Buddha in connection with
this, and the Buddha directed the Venerable Ananda to go regularly to the
palace and teach the Dhamma to Queen Mallika and Queen Vasabhakhattiya. After
some time, the Buddha asked the Venerable Ananda about the progress of the two
queens. The Venerable Ananda answered that although Mallika was learning the
Dhamma seriously, Vasabhakhattiya was not paying proper attention. On hearing
this the Buddha said that the Dhamma could be of benefit only to those who
learn it seriously with due respect and proper attention and then practise
diligently what was taught.


Then the Buddha spoke
in verse as follows:


*Anagami: one who has attained the
third Magga.

WordPress database error: [Table './sarvajan_ambedkar_org/wp_comments' is marked as crashed and should be repaired]
SELECT COUNT(comment_ID) FROM wp_comments WHERE comment_post_ID = 1771 AND comment_approved = '1';

WordPress database error: [Table './sarvajan_ambedkar_org/wp_comments' is marked as crashed and should be repaired]
SELECT COUNT(*) FROM wp_comments WHERE comment_post_ID = '1771' AND comment_approved = '1'