WordPress database error: [Table './sarvajan_ambedkar_org/wp_comments' is marked as crashed and should be repaired]
SELECT ID, COUNT( comment_ID ) AS ccount FROM wp_posts LEFT JOIN wp_comments ON ( comment_post_ID = ID AND comment_approved = '1') WHERE ID IN (1766,1765) GROUP BY ID

DR BR AMBEDKAR IS NO 1 TALENTEDPERSON IN THE WORLD-Last month’s analysis of top 100talented persons in the world-Cambridge University London displayed the list.Out of 100 the first talented person is Dr Baba SahebBhimrao Ambedkar. 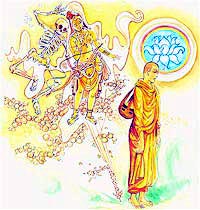 
Having known this froth-like body
and awakening to its mirage nature,
smashing Maraâs flowered shafts
unseen beyond the Death-king go.

Explanation: This body of ours is like froth, bubbles, or
foam. It disintegrates quickly. The nature of life is like a mirage,
an illusion. Therefore, one must give up these unrealities. To achieve
that one must destroy Maraâs flower-arrows by which he tempts
men and women. It is necessary that the truth-seeker should go beyond
Maraâs region, to areas unseen by him. Mara knows only the realm
of death. The truth seeker goes beyond that region to the âdeathlessâ
(Nibbana) - a domain Mara has never seen.

Verse 46: One who knows that this body is impermanent like froth, and
comprehends that it is insubstantial like a mirage, will cut the flowers of Mara
(i.e., the three kinds of vatta or rounds), and pass out of sight of the
King of Death.

2. maricidhammam: lit., mirage + nature; nature of a mirage, i. e.,
insubstantial like a mirage.

3. marassa papupphakani: flowers or flower-tipped arrows of Mara.
These flowers or arrows of Mara represent the tivattam or the three kinds
of vattam (rounds), viz., kilesavattam ( the round of moral
defilements), kammavattam (the round of volitional action) and vipakavattam
(the round of resultant effects). According to the Commentary, this chain or
round is broken when cut by the sword of ariya magga nana.

4. adassanam maccurajassa gacche: In this context, out of sight of the
King of Death means the realization of Nibbana.

While residing at the Jetavana monastery, the Buddha uttered Verse (46) of
this book, with reference to a certain bhikkhu.

On one occasion, a certain bhikkhu, after taking a subject of meditation from
the Buddha, went to the forest. Although he tried hard he made little progress
in his meditation; so he decided to go back to the Buddha for further
instruction. On his way back he saw a mirage, which, after all, was only an
illusive appearance of a sheet of water. At that instant, he came to realize
that the body also was insubstantial like a mirage. Thus keeping his mind on the
insubstantiality of the body he came to the bank of the river Aciravati. While
sitting under a tree close to the river, seeing big froths breaking up, he
realized the impermanent nature of the body.

Soon, the Buddha appeared in his vision and said to him, “My son,
just as you have realized, this body is impermanent like froth and insubstantial
like a mirage.”

At the end of the discourse the bhikkhu attained arahatship.

WordPress database error: [Table './sarvajan_ambedkar_org/wp_comments' is marked as crashed and should be repaired]
SELECT COUNT(comment_ID) FROM wp_comments WHERE comment_post_ID = 1766 AND comment_approved = '1';

WordPress database error: [Table './sarvajan_ambedkar_org/wp_comments' is marked as crashed and should be repaired]
SELECT COUNT(*) FROM wp_comments WHERE comment_post_ID = '1766' AND comment_approved = '1' 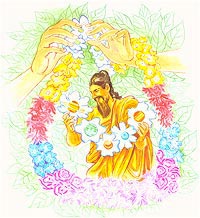 
One Trained will comprehend this earth,
the world of Yama, and the gods,
One Trained discern the well-taught Dhamma
as one whoâs skilled selects a flower.

Explanation: In the previous stanza the question was raised
as to who will penetrate the well-articulated doctrine? The present
stanza provides the answer: the student, the learner, the seeker,
the person who is disciplined. He or she will perceive the doctrine,
like the expert garland-maker who recognizes and arranges flowers.
It is the learner, the seeker, the student who will perceive the world
of Yama, the realm of heavenly beings and existence on earth. He will
discard and determine the various areas of the doctrine, life a deft
garland-maker who plucks and arranges the flowers into garlands.

WordPress database error: [Table './sarvajan_ambedkar_org/wp_comments' is marked as crashed and should be repaired]
SELECT COUNT(comment_ID) FROM wp_comments WHERE comment_post_ID = 1765 AND comment_approved = '1';

WordPress database error: [Table './sarvajan_ambedkar_org/wp_comments' is marked as crashed and should be repaired]
SELECT COUNT(*) FROM wp_comments WHERE comment_post_ID = '1765' AND comment_approved = '1'