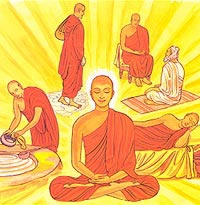 With hands controlled and feet controlled,
in speech as well as head controlled,
delighting in inward collectedness
alone, content, a bhikkhuâs called.

Explanation: He who controls his hands, controls his foot,
controls his speech, and has complete control of himself; who finds
delight in insight development practice and is calm; who stays alone
and is contented they call him a monk.

Verse 362: He who controls his hand, controls
his foot, controls his speech, and has complete control of himself; who finds
delight in Insight Development Practice and is calm; who stays alone and is
contented; â him they call a bhikkhu.

The Story of a Bhikkhu Who Killed a Swan (Hamsa)

While residing at the Jetavana
monastery, the Buddha uttered Verse (362) of this book, with reference to a
bhikkhu who killed a swan.

Once there was a bhikkhu who was
very skilful in throwing stones; he could even hit fast-moving objects without
fail. One day, while sitting with another bhikkhu after having their bath in the
Aciravati River, he saw two swans flying at some distance. He told his friend
that he would get one of the swans by throwing a stone at it. At that instant,
the swan, hearing voices, turned its neck and the bhikkhu threw a pebble at the
bird. The pebble went through one eye and came out of the other eye of the bird.
The bird cried out in pain and agony and dropped dead at the feet of the young
bhikkhu.

Other bhikkhus seeing the
incident took the young bhikkhu to the Buddha. The Buddha reprimanded him and
said, “My son, why have you killed this bird? Why especially you, a
member of my Order, who should be practising loving-kindness to all beings and
who should be striving ardently for liberation from the round of rebirths? Even
during the period outside the Teaching, the wise practised morality and observed
the precepts. A bhikkhu must have control over his hands, his feet and his
tongue.”