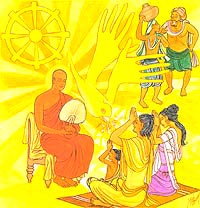 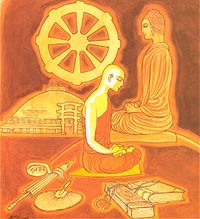 Verse 365: One should not despise what one has
received (by proper means), nor should one envy others their gains. The bhikkhu
who envies others cannot attain Concentration (Samadhi).

Verse 366: Though he receives only a little,
if a bhikkhu does not despise what he has received (by proper means), the devas
will surely praise him who leads a pure life and is not slothful.

While residing at the Jetavana
monastery, the Buddha uttered Verses (365) and (366) of this book, with
reference to a bhikkhu who was on friendly terms with a follower of Devadatta.

The Buddha then reprimanded him
and pointed out that his behaviour made him appear like a follower of Devadatta.
To him the Buddha said, “My son, even though you have not embraced the
doctrine of Devadatta, you are going about as if you were one of his followers.
A bhikkhu should be contented with what he gets and should not covet other
people’s gains. A bhikkhu who is filled with envy at the good fortune of others
will not attain concentration (samadhi), or Insight, or the Path that leads to
Nibbana (Magga). Only the bhikkhu who is contented with whatever he gets will be
able to attain concentration, Insight and the Path.”