All these video messages, the excerpts of which are already being shared
on facebook, Twitter, Youtube and  WhatsApp by a team of social media
savvy supporters of the party,  send a tell-tale sign of BSPâs changed
approach in the current state polls to woo the voters.
Rallies are still where Mayawati excels, but now her outfit has also
heavily invested its thought and energy into new media. Twitter handles
backing the party have opened a broadside against rivals â mainly BJP
–  and professionally produced digital and video campaigns are
arresting peopleâs attention.
Apart
from the partyâs officials handles, scores of BSP supporters,
mostly youth, have been running a concerted campaign in support of the
Sarvajan  party through different twitter handles. These are being used
to
share information on programmes and public meetings for promoting BSP
ideology as well as countering each move of the rivals.

Behenji Mayawati’s  birthday on January 15 (Sunday) has given the Bahujan Samaj
Party (BSP) the perfect opportunity to escalate its social media blitz.

Over the next
few days, the BSP will launch a string of videos and posters on Twitter,
Facebook and other online platforms with the catchphrase - ‘Behenji Ko
Aane Do (Return Mayawati to power).

Mayawati plans to address over 50 rallies in the coming weeks.

The
campaign on Facebook, Twitter, WhatsApp and YouTube will be a new
add-on for the 60-year-old who has always preferred more traditional
ways of reaching out to her supporters.

The BSP, which contests under the “elephant” symbol, has active Twitter and Facebook accounts which are very popular. 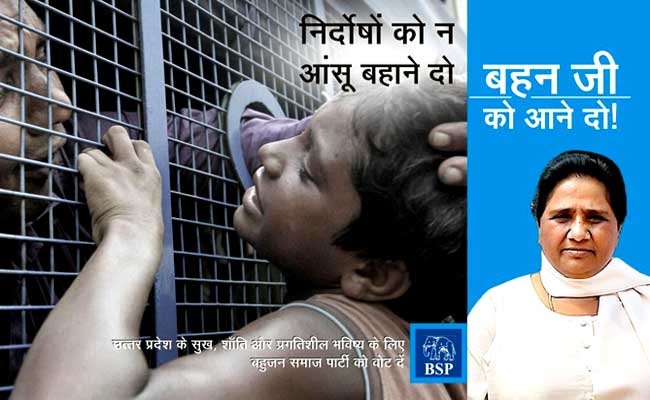 While planning to target Murderer of democratic institutions (Modi)
over Demonetisation and SPâs goonda raj and ongoing fierce family feud
during public
rallies, partyâs over a dozen campaign videos will form the series with
themes such as
“Let daughters smile”,

“Dignity of all communities”,

“Justice for the innocent”,

and
“Empowerment of women

screen-fitted campaign
vehicles will telecast these films in rural areas

BSP supremo Mayawati
has forged ahead of her political opponents as far as preparations for
the Assembly elections are concerned. The BSP will also highlight the achievements of the Mayawati-led
government from 2007-2012 through short films.

BSP candidates have been given the permission to use the social media
for their individual campaigns as well but without deviating from the
party ideology.

Ms Mayawati will be addressing around 60 meetings in various districts
in the coming days.

âThe
video campaign will be aired through screen-fitted campaign vehicles in
rural areas. Party has roped in an agency to the make these films and
videos, and draft the strategy for the partyâs campaign,â said a senior
party leader.

With the notification of the first phase of UP
assembly elections on January 17, Mayawati is all set to launch her
party campaign addressing over 60 meetings in different districts across
the state.

According to foreign media, Modi is scared of Mayawati. Here’s why.

When Amit Shah, president of Modi’s BJP (Bahuth Jiyadha Psycchopaths)
party, meets with Modi, he is sometimes asked a question he struggles to
answer: “What is behenji thinking?”

By “behenji”, or ” sister”,
Modi means Mayawati, the enigmatic politician and former ruler of the
Country’s most populous state, Uttar Pradesh.

Modi’s keen
interest in what the 60-year-old is up to reflects concern about his
political prospects, amid an economic recovery that many poor people
have yet to feel and rising social tensions among sizeable minority
communities.

With a near-devotional following from tens of
millions of people who, like her, belong to the bottom rung of country’s
social hierarchy, Mayawati is emerging as Modi’s chief challenger in a
key state election set for early this year.

“Mayawati is the biggest threat to our victory,” Sanjeev Balyan of BJP told Reuters.

“The one who becomes the chief minister of Uttar Pradesh gets to be the
most powerful political leader after the prime minister.”

Modi’s
(BJP) gobbled the Master Key with Uttar Pradesh, home to 200 million
people, in the 2014 general election, handing him the biggest
parliamentary majority in three decades as the EVMs were tampered in
favour of him.

It would also significantly not advance his chances of retaining power
when the country chooses its next prime minister in 2019 as the present
CEC has said that the entire EVM will be replaced.

The ex CJI had committed a grave error of judgement by orderring that
the EVMs would be replaced in a phased manner as suggested by the ex CEC
Sampath because of the cost of Rs 1600 crores involved in the entitre
EVMs replacement. It was proved in the Supreme court that the EVMs
could be tampered hence they have to be replaced.

Because of these EVMs Ms Mayawati’s BSP lost in the Lok Sabha elections
while with in a short period they won with thumping majority where
paper ballots were used.

Hence Modi sees danger in Sarvajan Samaj Queen Mayawati and he is scared of her and she is the biggest threat to his victory.

Violent attacks on SC/STs are turning the opinion of some against the
BJP and its 1% intolerant, violent, militant, shooting, lynching,
lunatic, mentally retarded cannibal chitpawan brahmin psychopaths of
stealth, shadowy,discriminatory hindutva cult rashtra supporters,
giving Mayawati a new lease of life as she seeks a political
renaissance.

Mayawati is calling on minority groups to reject the
BJP, whose roots are in hindutva rashtra that many SC/STs and Muslims
see as a threat to their way of life.

“Communal forces are
becoming stronger,” she told 500,000 cheering supporters, as she kicked
off her election campaign at a sprawling park she built to honour
Aboriginal Inhabitants, previously known as “untouchables”, in Uttar
Pradesh’s capital Lucknow.

“I want to ask Modi where are the jobs
for SC/ST boys and girls?” she said. “He will never understand the
problems faced by us.”

Speaking on the sidelines of the rally,
Mayawati’s Bahujan Samaj Party (BSP) general secretary Satish Mishra
said SC/STs and Muslims “were totally unsafe” under Modi, a view that
reflects Mayawati’s strategy to try and convince the two groups to vote
as one.

Self-styled hardline Hindu cow protectors have targeted
SC/STs and Muslims who make money skinning dead cows, accusing them of
killing animals sacred to hindutva which are considered as gomata i.e.,
their cow mother and gopitha i.e., their bull father.

In July,
footage emerged of four Scheduled Caste men tied to a car, stripped and
being flogged in Modi’s home state of Gujarat, triggering violent
protests.

Dressed in her trademark beige salwar kameez, Mayawati has sped across the country to appear at the side of victims.

“Mayawati has herself a godsend,” said Ramesh Dixit, a former professor
of political science at Lucknow University, referring to the attacks.

Foreign media on UP election: PM Modi sees danger in Dalit Queen Mayawati
When
Amit Shah, president of Narendra Modis ruling party, meets with the
Indian prime minister, he is sometimes asked a question he struggles to
answer: -What isâ¦
indiatoday.intoday.in

Mayawati
is a Prabuddha Bharat  politician who served four terms as Chief
Minister of
Uttar Pradesh as head of the Bahujan Samaj Party, which focuses on a
platform of social change to improve the welfare of the weakest strata
of the Country’s  societyâthe Bahujans or Sarvajans including  Other
Backward Classes, religious minorities and the poor Upper castes . She
was Chief Minister briefly in 1995 and again
in 1997, then from 2002 to 2003 and from 2007 to 2012.
Mayawati’s rise from humble beginnings has been called a “miracle of
democracy” by P. V. Narasimha Rao, former Prime Minister of India. In
1993 Mayawati formed a coalition with the Samajwadi Party and became the
youngest Chief Minister of Uttar Pradesh at that time. She was the
first female Sarvajan Chief Minister in India. In 1997 and in 2002 she was
Chief Minister for  the second
time for a full term.
Mayawati’s tenure has attracted praise. Millions of Sarvajans view her as an icon, and refer to her as Behen-ji. She has been
praised for her fundraising efforts on behalf of her party and her
birthdays have become major media events and a symbol for her
supporters.

Dignity of all communities

Justice for the innocent

According to foreign media, Modi is scared of Mayawati. Here’s why.

The Bahujan Samaj Party (BSP) will fight it alone in the upcoming
Uttar Pradesh Assembly elections, party Chief Mayawati said in a press
conference in Lucknow on Sunday.

NEW DELHI: Labelling the Samajwadi Party as a âdrama companyâ, the
Bahujan Samaj Party (BSP) on Saturday said the ruling party of Uttar
Pradesh is there only to fool people.

ARUN JAITLEY IS IN HURRY TO ANNOUCE â EXTENTION OF ILLEGAL CONCESSIONS
& TAX DODGES TO CORPORATE & SELECT SECTORS THAN ARE ALL CORRUPT
PRACTICES.

It is Scandalous to present budget based on Rough
Estimates TWO MONTHS in advance â âPresumable Running Out of Tax Money
due to Demonetizationâ.

May Bahen Kumari Mayawati Ji be ever happy,well and secure !..

UP Elections 2017: Muslim Voters are Confused on Choosing SP or BSP