WordPress database error: [Table './sarvajan_ambedkar_org/wp_comments' is marked as crashed and should be repaired]
SELECT ID, COUNT( comment_ID ) AS ccount FROM wp_posts LEFT JOIN wp_comments ON ( comment_post_ID = ID AND comment_approved = '1') WHERE ID IN (1904) GROUP BY ID

The Buddha Cannot Be Tempted 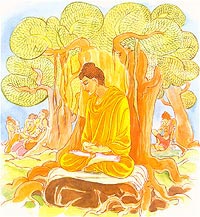 Verse 179.
The Buddha Cannot Be Tempted

That
Buddha traceless of infinite range
whose victory none may eâer undo,
whose vanquished follow to no world,
then by which track will you trace him?

Explanation:
The Buddhaâs victory has not been won incorrectly. No one can turn Buddhaâs
victory into defeat. Nothing that he has conquered can return, or pursue him,
because his conquest is so complete: His ken infinite, In what way can you
tempt or ensnare him. 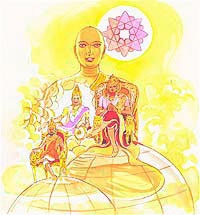 Verse 180.
The Buddha Cannot Be Brought Under Sway

That
Buddha traceless of infinite range
in whomâs no entangling craving
and no ensnaring not anywhere lead,
then by which track will you trace him?

Explanation:
The Buddha, in whom there is no thirst (tanha) for grasping to the net that
lures, whose ken is infinite, in what way can you lure him away?

Verse
179: The Buddha, whose conquest (of moral defilements) is complete, in whom
there cannot arise any further defilements in this world, that Buddha of
infinite range of wisdom, who is trackless, - by what track will you lead him?

Verse
180: The Buddha, in whom there is no craving, which like a net would bring him
back to any existence (in samsara), that Buddha of infinite range of wisdom,
who is trackless, - by what track will you lead him?

1.
jitam navajiyati: ‘the conquest is complete’ means there is no need for further
conquests as there are no more moral defilements to be conquered.

2.
jitam yassa no’yati koci loke: lit., whose conquered defilements cannot be
followed by any further defilements in this world.

3.
anantagocaram: The range of wisdom of the Buddha is infinite by reason of his
omniscience, Sabbannuta nana. (The Commentary)

4.
apadam: lit., ‘trackless’. The Buddha, being free from conditions of rebirth,
such as craving, clinging, passion, etc., his track or passage through samsara
has come to an end. (The Com.)

[The
same idea is conveyed in verses 92 and 93 which express the idea that the
arahat passes away, leaving no more trace of existence than a bird leaves its
passage through the air.]

5.
kena padena nessatha: lit., by what track will you lead him? It means he cannot
be lured by any temptation whatsoever.

The
Story of the Three Daughters of Mara

The
Buddha first uttered Verses (179) and (180) of this book while residing near
the Bodhi tree, with reference to the three daughters of Mara. He repeated
these verses to the brahmin Magandiya while journeying through the Kuru
country.

Magandiya
the Brahmin and his wife lived in the kingdom of the Kurus with their daughter
Magandiya who was exceedingly beautiful. She was so beautiful that her father
rudely turned down all her suitors. One day, early in the morning, when the
Buddha surveyed the world, he found that time was ripe for the brahmin
Magandiya and his wife to attain Anagami Fruition. So, taking his bowl and the
robes, the Buddha set out for the place where the brahmin usually went to offer
fire sacrifice.

The
brahmin, seeing the Buddha, promptly decided that the Buddha was the very
person who was worthy of his daughter. He pleaded with the Buddha to wait there
and hurriedly went off to fetch his wife and daughter. The Buddha left his
footprint and went to another place, close at hand. When the brahmin and his
family came, they found only the footprint. Seeing the footprint, the wife of
the brahmin remarked that it was the footprint of one who was free from sensual
desires. Then, the brahmin saw the Buddha and he offered his daughter in
marriage to him.

The
Buddha did not accept nor did he refuse the offer, but first, he related to the
brahmin how the daughters of Mara tempted him soon after his attainment of
Buddhahood. To the beautiful Tanha, Arati and Raga, the daughters of Mara, the
Buddha had said, “It is no use tempting one who is free from craving,
clinging and passion, for he cannot be lured by any temptation
whatsoever.”


Then,
the Buddha continued, “Brahmin Magandiya, even when I saw those peerless
daughters of Mara, I felt no sensual desire in me. After all, what is this body
of your daughter? It is full of urine and filth; I don’t like to touch it even
with my foot!” On hearing those words of the Buddha, both the brahmin
and his wife attained Anagami Fruition. Later, they joined the Order and
eventually both of them attained arahatship.

Geneva, May 24, 2012 - Dalit rights
activists gathered in Geneva are disappointed at the Indian delegation’s
immediate response to the real challenges that SC/STs face, when India was
reviewed at the UN Universal Periodic Review of India on 24 May.

Activists comment that the delegation
failed to adequately address concerns about strengthening the Prevention of
Atrocities Act, bringing in anti-discrimination law, the socio- economic development
of Scheduled Castes (SC/STs) and Scheduled Tribes (Tribals), and caste and
gender intersectionality, among a number of other key concerns.

THE LIVING WORD OF THE BUDDHA

That the World May Hear the Buddha Word

The Most Detailed Sutta Translation

All the available English translations of the Suttas are
either faulty and out of date (done about a hundred years ago) or restricted by
space (as a single-volume work and lacking notes). So they are useful almost
only to the specialists.

(2) A history of the Sutta Discovery

The Sutta Discovery (SD) series started with the NUS
Buddhist Society weekly Sutta Study Group (SSG) classes in February 2002 and
the Buddhist Fellowship in February 2003. A new volume of translations and
essays (A4 size, averaging 180 pages) is released every three months.

These new SD volumes appear once every 3 months. These
volumes are fully studied in the BF (every Tuesday, since 2003) and the TMC
(every Wednesday, since 2006). By December 2009, Piya has completed at least 32
volumes of the Sutta Discovery. By 2030, over 100 SD volumes have been
projected. This current series is registered as ISBN
978-981-08-xxxx-x.

Beginning 2010, the SD Publication Project plans to publish
SD vol 1 onwards in book form, hopefully releasing 1-3 volumes each year, depending on funds. You can help us print
the Suttas.

3 Projected costs of Printing the
Suttas

3.1 This pioneer effort will be a âLIMITED
EDITIONâ of 1500 copies of the Sutta Discovery series, but more may be printed
if we have sufficient funds and demand.

3.3 Part of the publication will be
available on the open market TO GENERATE FUNDS for printing other SD volumes
and related works, and for supporting Piya Tanâs Dharma work.

3.4 YOU CAN HELP in the following ways,
besides publicizing this project for us:

Books and CDs/USB flash drives are available on a donation basis, to get your copies, please email: dharmafarer@gmail.com or  call 82110879 (ask for Ratna Lim).

Dear Piya Tan,
Thousand thanks for the two CDÂ´s with your precious Sutta material, which
arrived two days back! I also downloaded some from the website you mentioned.
All that is very precious and most useful for our sutta study group over here.

WordPress database error: [Table './sarvajan_ambedkar_org/wp_comments' is marked as crashed and should be repaired]
SELECT COUNT(comment_ID) FROM wp_comments WHERE comment_post_ID = 1904 AND comment_approved = '1';

WordPress database error: [Table './sarvajan_ambedkar_org/wp_comments' is marked as crashed and should be repaired]
SELECT COUNT(*) FROM wp_comments WHERE comment_post_ID = '1904' AND comment_approved = '1'