WordPress database error: [Table './sarvajan_ambedkar_org/wp_comments' is marked as crashed and should be repaired]
SELECT ID, COUNT( comment_ID ) AS ccount FROM wp_posts LEFT JOIN wp_comments ON ( comment_post_ID = ID AND comment_approved = '1') WHERE ID IN (7410) GROUP BY ID

Daily Wisdom
“Nahi verena verani - sammanti’dha kudacancam
Averenacasammanti - esa dhammo sanantano”
Hatred is never appeased by hatred in this world;
it is appeased only by non-hatred This is an eternal law.

The method adopted by Lord Buddha on the banks of
river Rohini to avert an imminent war and his teaching would be most
appropriate in the management of the ethnic conflict in this country,
which acquired immensely tragic dimensions.

The
preceding account of the Rohini river dispute reveals that the decision
to wage war did not emanate from the top but escalated from below due to
suspicions of an unequal distribution of river water. Having
ascertained this, the Buddha questioned both sides as to the
consequences of war. In response they agreed with the Buddha that as a
result of war there will be extensive loss of life on both sides. The
Buddha then posed the question as to what was more valuable, the water
they were fighting for or the blood that would be shed. When all agreed
that blood that would be shed is more valuable, the Buddha eased the
tension that had built up and brought about an amicable settlement. The
important sermon the Buddha delivered at this stage was that, “since
wars begin in the minds of men, it is in the minds of men that the
defences of peace must be constructed”. The very words of this noble
sermon have been now incorporated in the Preamble to the Constitution of
the UNESCO, denoting its timeless truth.

https://www.wittychimp.com/trouble-on-the-rohini…/
On The Rohini
Irrigate â to supply land with water in order to help crops grow
Live in harmony â live together without fighting
The armies were not sure why they were going to war
The Buddha believed in peace and harmony
The Buddha said that people who remain united are always stronger than those who are alone
âOh! This must be one of the hottest summers
Weâve ever had! See how low the river is!â
- The Sakyans said these words.
The speaker was referring to the water in the river Rohini.
The
Sakyans and the Koliyans started to argue and stopped each other from
taking water to irrigate their crops and later it turned out to be a
fight.
There
was scarcity of water due to hot summer days. Both, the Koliyans and
the Sakiyans feared that they would not have enough water for
irrigation. Each tribe claimed right over the water in the Rohini,
leading to a dispute.
âWeâve just heard of a dispute on Rohini. The Sakyans have insulted our people.â
One of the men from the Koliyan tribe speaks the above lines.
No,
the Sakyans did not insult the Koliyans. It was a simple argument but
the Koliyans were so offended that they took that as an insult to their
tribe.
Everyone agreed with him without thinking and they wanted to call the army and fight a war
âThis is not the time for talkâ¦â¦..this is the time for action!â
One of the Sakyans said these words.
The speaker is talking about war against the Koliyans for the water from the river Rohini.
Yes,
instead of fighting against each other for water, they could have first
talked with each other about sharing the water from the river Rohini.
âShouldnât we talk to them first?â
The
speaker is responding to one of the men of the Sakyan tribe who wanted
to get the troops together to teach the Koliyans a lesson for their
misbehaviour.
The
speaker was a wise Sakiyan and did not want to be impulsive. He
suggested talking to the Koliyans about sharing water before calling in
the troops.
None agreed with him. They felt they should act fast and that there was no time to talk.
âBut a tree that grew alone and separate from the others was blown down and destroyed!â
The Buddha said these words to the Sakyans and the Koliyans.
Once
there was a great storm. The trees that grew close to each other and
whose branches were intertwined remained standing. But a tree that grew
alone and separate from the others was blown and destroyed.He told them
this story in order to make them realise the importance of living in
peace and unity that will lead them to live a happy life.
Lord
Buddha sensed trouble between the tribes. He knew if he didnât
intervene, things would go beyond control and there would be bloodshed.
Hence, he came to meet the people of the tribes and make peace between
them.
Both the Sakyans and the Koliyans needed a peaceful lord like the Buddha to sort out their differences.
The
Sakyans and Koliyans were foolish and acted impulsively. For them, the
answer to any conflict was only war. At the same time, they had a lot of
respect for the Buddha, which helped in bringing peace and harmony
among them.
Despite
being related, both Sakyans and Koliyans were almost at war with each
other during a crisis. How should they have dealt with the situation?
What lesson have you learnt from this?
Though
the Koliyans and the Sakyans were related, their territory was divided
by the Rohini River and for irrigation they had built a dam. Both the
tribes were living in harmony till the water crisis arose. During any
crisis where two parties are involved, arguments and differences of
opinions are likely to happen. It happened among the two tribes as well.
But instead of settling their differences by talking, they chose to
wage a war. Fortunately for them, Lord Buddha restored peace and harmony
by making them understand the value of human life and the importance of
unity. Bloodshed was averted. From this we understand that any conflict
can be resolved through sensible discussion and understanding each
other.
So, these were Trouble On The Rohini
wittychimp.com/trouble-on-the-rohini-questions-answers/ 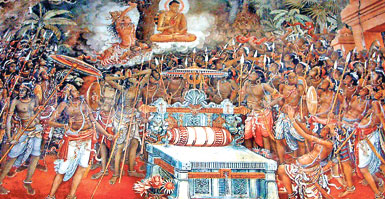 This painting at the Kelaniya temple depicts the
scene where Lord Buddha intervened to bring peace between the two
warring factions in Naagadeepa
The territories of the Sakya and Koliya clans were defined by the river
“Rohini”. The respective clans cultivated land on the two banks of the
river using its water. There was a severe drought which reduced the flow
of water and clansmen suspected that the other would take more of the
available water and deny to one sufficient water for cultivation. This
suspicion gradually festered and one clan prepared for war. On seeing
this, the other clan too assembled on the bank of the river armed for
war. The Buddha arrived at the site of imminent and battle as stated
before and questioned the warring clansmen as to who took the decision
to wage war. It was then revealed that the decision was not made by any
one in the ruling segments of the clans but that suspicions in the minds
of the people as to the denial of their share of river water resulted
in the people arming themselves and assembling for war.
The
fate of the Sakya clan which resulted from a later war also reveals
that the Buddha took the view that war cannot be averted in every
instance. On the contrary, he has intervened only upon a reasonable
belief that such intervention would lead to a peaceful result. Thus a
prerequisite of conflict management is that there should be proper
understanding of the dispute and a practical flexibility in evolving a
feasible solution.

Since,
conflict begins in the mind, in management it is foremost that the
particular state of mind which caused the conflict to arise be addressed
adequately. Hence it is necessary to dwell on the working of the human
mind as a prelude to conflict management. In this regard it can be
stated without any fear of contradiction that Buddhism is the only
religion, philosophy and science which addresses the working of the
human mind.

These four Elements are also known as the
“Mahabutha”. The elements in combination form what are known as “Rupa
Kalapa” (in relation to the body they would be the “Cells”).

The
Buddha Dhamma contains a detailed exposition of the manner in which
these Elements and the “Rupa” of which it is composed, function, which
would in turn explain the multiplicity of diseases that afflict the
physical body, from a common cold to a cancer. Whatever be the extent to
which medical science develops, it would to that extent confirm the
Buddha Dhamma and not contradict it.

The
other four Aggregates, Vedana (feeling), Sanna (Perception), Sankara
(formations) and Vinnana (Consciousness) are not visible and constitute
the working of the Mind. The function of each of these Aggregates is
denoted by its name.

WordPress database error: [Table './sarvajan_ambedkar_org/wp_comments' is marked as crashed and should be repaired]
SELECT COUNT(comment_ID) FROM wp_comments WHERE comment_post_ID = 7410 AND comment_approved = '1';

WordPress database error: [Table './sarvajan_ambedkar_org/wp_comments' is marked as crashed and should be repaired]
SELECT COUNT(*) FROM wp_comments WHERE comment_post_ID = '7410' AND comment_approved = '1'