Inauguration of the new block of

OF PALI AND THERAVADA BUDDHISM

Cordially request the pleasure of your participation in the

Which marks the 90th birthday ofbeloved Bada Bhante the

And its sister organisations

Bengaluru, in 1956 with a sole aim of carrying Dhamma to as many

People as possible. Since then his tireless work continued till date

Offering the original teachings of the Buddha through spiritual,

Educational and humanitarian services. It is the Holy Dhammapada

And made him to become a Buddhist monk. We are celebrating his 90th

Kindly donate for the services, Thank you.

The night-long chanting for protection begins at 8:00 PM

Everyday there will be Dhamma Discourses at 5:30 PM

And special puja and Deepa puja at 6:30 PM

Offering of breakfast, lunch and evening meals at

Sri Rakum School for the Blind,  Indiranagar and

The National Association for the Blind, Jeevanbhima Nagar

DHAMMADUTA WORK IN INDIA by

FOLLOWING BOOKS WILL BE RELEASED DURING DHAMMAPADA FESTIVAL

Motion the Wheel of Truth. 4. The Buddha and His Dhamma-1, 5. Pristnized

Potentials and Their Fulfilment, 9. Overcoming Aversion, 10. Removal of Hinderances,

8:30 AM Puja at Sacred Bodhi Rukkha and mahabofdhi Vishwa Stupa

9:30 AM Inauguration of the new block of

(Funded by the Govt. of India)

Honourable Union Minister for Labour and Employment, Government of India

Honourable Union Minister of Housing and

Urban Poverty Alleviation and Minister of Culture, Government of Karnataka

The night-long chanting for Protection negins at 8:0 PM

9:30 AM messages by Guest Monks

All expenses of Paritta Patha peogram are faithfully donated by

Upasaka Rajanna and his family. May their Dana conduce to their

liberation from sufferings and attainment of Bodhi â Awakenment !

All the Hospital Dana Services are donated and conducted by the

International Fellowship of Buddhist Youth Ladakh under the

Donors for Publication of Books:

May their dana conduce to their well-being,

Prosperity and awakenment! May they all be happy and well!

A model- how the mind works and more… 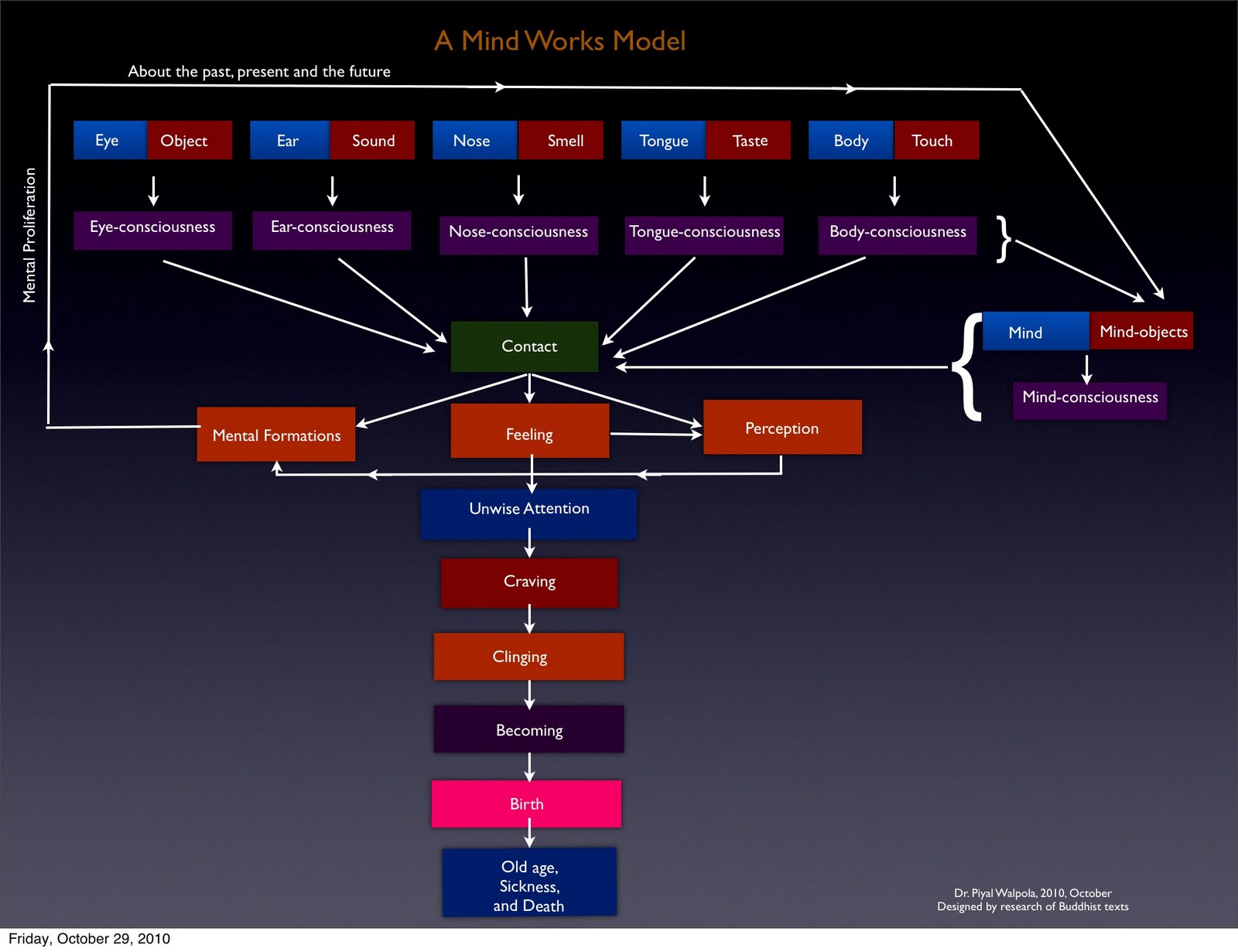 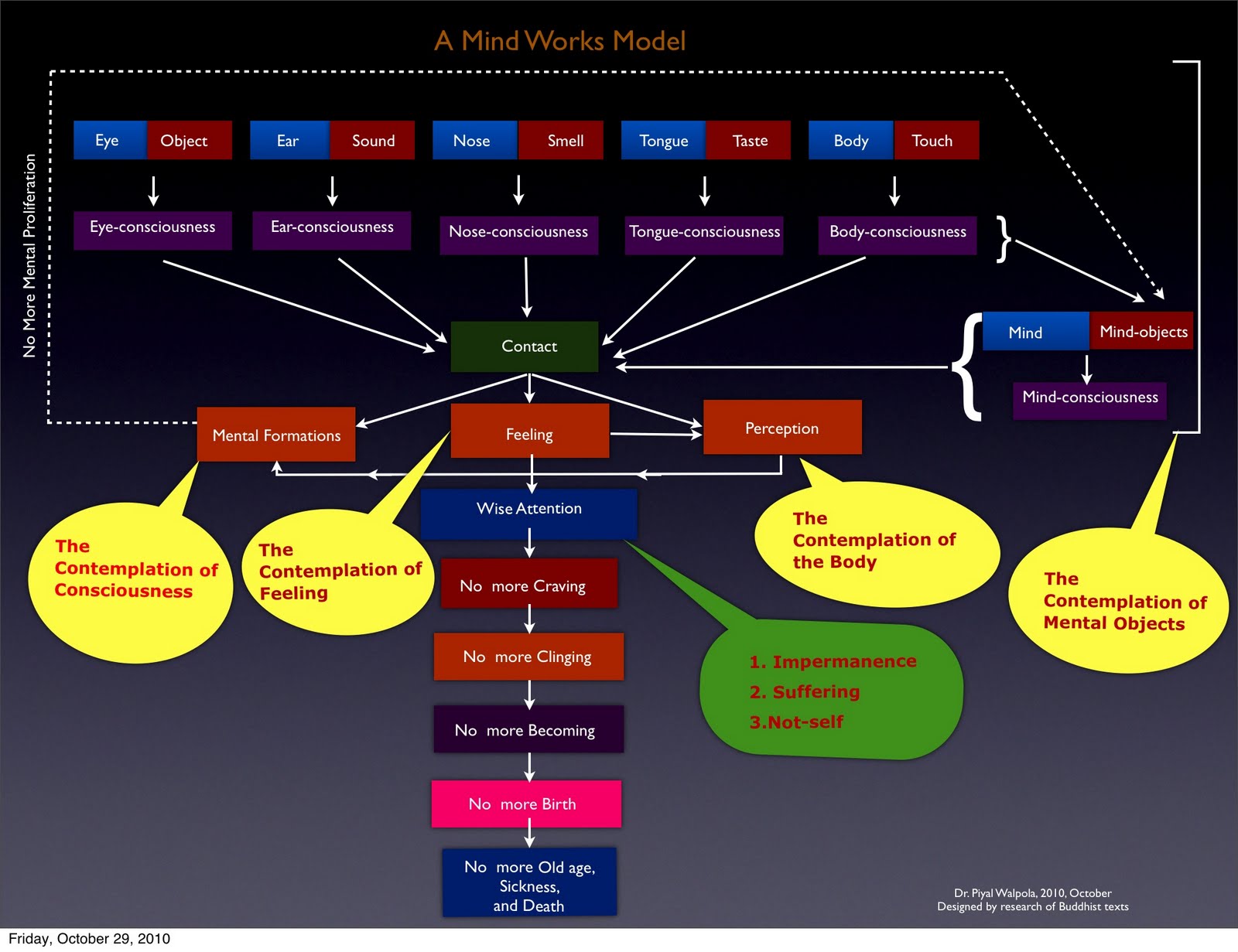 These are two preliminary models designed by me after researching Buddhists texts (suttas). I am open to any suggestions to edit these models. I may keep editing these models as I go along researching more Suttas. The model#1 shows how a mind works in an ordinary person. Yellow bubbles in Model#2 shows the points of applicationof TheFoundations of Mindfulness: (Satipatthana Sutta) and how it may work in a fully enlightened being. The green bubble shows The Three Basic Facts of Existence (The Three Characteristics (ti-lakkha.na), Impermanence (Anicca),Suffering or Unsatisfactoriness (dukkha) and Not-self or Insubstantiality (anattaa). This is the final common pathway of contemplation to insight (vipassana).

( Please see labels for more posts on these subjects)

Inauguration of the new block of

OF PALI AND THERACADA BUDDHISM

Maha Bodhi society Bangalore is dedicated for the welfare and happiness of people irrespective of religion, race, color or sex. Since its very inception the Society has been actively engaged in rendering various spiritual and humanitarian services. Today, under the guidance and leadership of Venerable Acharya Buddharakkhita, the Society has expanded its activities in different parts of India and abroad with the message of compassion. The society has established monasteries for monks and nuns, Hospitals, Meditation centers, educational institutions and published over a hundred Dhamma books benefiting thousands of people around the globe.

The Maha Bodhi Society celebrated its Golden Jubilee in 2006 and in commemoration of 50th year of service, the Society has taken another leap by starting The Mahabodhi Academy for Pali & Buddhist Studies which will be upgraded as Lord Buddha University of Pali and Theravada Buddhism.

would be spent under this scheme.

Shashank Shekhar Singh said that during the surprise inspection

conducted by the Hon’ble Chief Minister ji recently, she felt that the

urban SC/STs and poor had not got their dues so far. He said that the

Hon’ble Chief Minister ji from time to time has repeated that the SC/STs,

backwards and other deprived sections had been totally ignored for

centuries under the unequal social system prevalent in the country,

but under the Indian Constitution, framed by Baba Saheb Dr. Bhimrao

Ambedkar, these sections got legal rights to get the benefit of

development for the first time.

The Cabinet Secretary said that the Hon’ble Chief Minister ji

Sabha Vikas Yojana for the all-round development of dalit dominated

villages of the State. Several development schemes were being

implemented under this scheme in the rural areas.

the benefit of SC/STs residing in urban areas. He said that the Hon’ble

conducted surprise inspection of all the districts of the State.

The Cabinet Secretary said that under the scheme these bastis

manner. He said that the master plan of the selected bastis would be

prepared by the Chief Town Planner. Under the scheme, 250 SC/ST

above SC/ST population in a descending order during the first phase. A

provision of Rs. 3 crore has been made for C.C. roads only for the

bastis falling within the limits of Nagar Nigam areas. The selection of

Mr. Singh said that the review of the financial and physical

progress of various programmes to be implemented under the

schemes would be made at division and district level on regular basis.

and facilities being implemented previously. He said that under the

etc would be provided. Besides, these bastis would also be covered by

aid to destitute widows and disabled pension. Moreover, mother and

schemes which include setting up of health centres, vaccination,

T.B. control and leprosy eradication programme etc. would also be

implemented. He said that primary schools would also be set up in the

minorities, general category and disabled students would be covered

under the scholarship scheme. He said that the eligible persons would

be provided ration cards and housing facilities. Besides, the eligible

persons would also be covered under employment schemes like Swarn

backward classes and SC/ST employment programmes. They would

centres would also be constructed and beautification of parks would

Yojana and Mahamaya Garib Balika Ashirwad Yojana would also be