TIPITAKA from FREE ONLINE  eNÄlÄndÄ Research and Practice UNIVERSITY through http://sarvajan.ambedkar.org-Possibility of early polls, says Mayawati BSP to rethink on continuing support to UPA-Mayawati sounds election bugle, alleges ‘UPA, Akhilesh Govt. are anti-SC/ST’-Mayawati’s rally puts into motion her campaign for the Bahujan Samaj Party (BSP) for the 2014 Lok Sabha polls.On the issue of FDI in multi-brand retail, Mayawati left the door open on her party backing it.-

Bahujan Samaj Party (BSP) leader Mayawati said the party had left it to her to take a decision on the issue.

âThe BSPâs national executive and parliamentary board have authorised
me to take a final decision on support to the UPA [United Progressive
Alliance] government,â Ms Mayawati told a press conference after the
meeting on Wednesday morning.

âThe decision on the BSP continuing outside support to the UPA will come soon,â she said.

She has ensured that from now on, Congress strategists and floor
managers will have to constantly negotiate her support on every issue.

Mayawati sought
to convey a simple message to the Congress leadership: your longevity
depends on me. I can pull the plug whenever I want.

âWe have debated a lot yesterday and the national executive has decided
not to take a final decision in the matter and left the decision to me. I
have decided to give it serious thought only after considering all the
factors in this case. After I am done thinking and evaluating I will let
you all knowâ, she said in a rather cheerful mood.

Mayawati sees herself holding the
âbalance of powerâ in government formation after the next general
elections. She said as much to keep her cadre enthused and motivated to
work harder for poll preparation.

If yesterday she had made an indirect attack on Sonia Gandhi by talking about leaders who read out their speeches, today she blasted Prime Minister Manmohan Singh for pursuing âanti-peopleâ policies.  The rising prices of essential commodities and corruption were in focus.

The huge mass of BSP workers have been
asked to fight against the âanti-poor policies of the UPA governmentâ.
The purpose, in her own words, is to prepare the party on a
âwar-footingâ for an early parliamentary elections.

Ms Mayawati also announced a nation-wide agitation against corruption and the âanti-peopleâ policies of the government.

Ms Mayawati has so far left the door open on
whether her party will support the government on the issue of opening up
the multi-brand retail to global supermarkets.

âIf the financial situation of farmers and small traders improves
because of FDI [foreign direct investment], we could welcome it in
future but currently we do not support it,â she said.

Ms Mayawati, who was until recently the chief minister of the most
populous state of Uttar Pradesh, is an icon to millions of Sarvajan Samaj (Entire People)  and  SC/STs (formerly known as Untouchables),OBCs/Minorities  and has a very strong support
base in the state including the poorer Upper Castes.

She is now an MP from the Rajya Sabha â the upper house of parliament.

Bahujan Samaj Party supremo Mayawati on Wednesday kept up the suspense
on continuance of outside support to the UPA government at the Centre,
saying a decision on the issue will be taken soon.

She also asked the cadres to be ready for snap polls which âcan take
place any timeâ in view of a state of âinstabilityâ at the Centre.

Ms. Mayawati, who had said that decision on the issue of continuing
support to the UPA will be taken on Wednesday, said the BSP National
Executive and the Parliamentary Board have left it to her to take a
final call on it.

âBut there will be no delay. The decision will be taken soon and conveyed to you,â she told reporters after the meeting.

Ms. Mayawati said it was now her âresponsibilityâ to take a decision on
the issue keeping in mind the interests of the people as well as her
partyâs ideology.

She said her party has supported the UPA with a view to weaken
fundamentalist forces in the country and work for the welfare of all the
sections of the society, including SC/STs and minorities.

âBut it is a matter of sorrow that the attitude of the central
government has been very disappointing regarding these from the very
beginning,â she said.

Ms. Mayawati said that prices have spiralled due to the âwrong policiesâ of the government.

âBesides, a number of anti-people decisions have been taken by the
Centre due to which people of the country are very
perturbed…corruption is rampant and no effective steps have been taken
by the government so far to check it,â the former UP Chief Minister
said.

Ms. Mayawati asked the party cadre to expose the âwrongâ policies of the
government by holding cadre camps, dharnas and public meetings across
the country on a war footing so that the Centre is forced to withdraw
its âanti-peopleâ decisions.

âKeeping in mind the state of instability at the Centre, mid-term polls
can take place any time. Our party has to prepare on a war-footing. We
want to emerge as a balance of power,â she said.

She alleged that corruption was rampant in this government and no concrete steps have been taken to check it.

The BSP supremo said the national executive and the parliamentary board
also decided to launch a campaign to expose âanti-peopleâ policies of
the Centre across the country through demonstrations and public
meetings.

âThe campaign will be launched across the country very soon so that
pressure could be created on the government to withdraw anti-people
decisions,â she said.

âAfter yesterdayâs sankalp rally in which several lakh people from
across the country participated and witnessing their enthusiasm I can
say with full confidence that that my party is ready in case early
elections are held,â she said.

The BSP leader said that her party was confident that it would perform well in Lok Sabha elections this time.

BSP will welcome FDI in retail if it benefits farmers & traders; at present the party doesnot support it.”

With her sights now set on the 2014 Lok Sabha elections, Bahujan Samaj
Party president Mayawati on Tuesday said there was a possibility of the
poll being held earlier, even as she launched a scathing attack on the
Akhilesh Yadav government.

âUttar Pradesh under the present regime has been transformed into a crime Pradesh,â she said.

On the crucial issue of continuing support to the UPA government in the
light of the âanti-peopleâ measures such as diesel price hike, FDI in
multi-brand retail and a cap on LPG cylinders, Ms. Mayawati said she
would take a call on the issue on Wednesday, at the national executive
meeting of the BSP here.

However, in contrast to her vitriolic attack on the Akhilesh government, as she dubbed the decision on FDI in retail a suicidal move, Ms.
Mayawati said the âBSP would welcome FDI in retail if the move benefits
farmers and small traders; at present the party does not support it.â

Addressing the âsankalp maharallyâ to mark the sixth death anniversary
of the partyâs founder, Kanshi Ram, at the Ramabai Ambedkar Maidan, the
former Chief Minister condemned the Samajwadi Party regime for
cancelling the public holiday on October 9.

Slamming the Akhilesh Yadav government as âanti-SC/ST,â the BSP
president accused it of political vendetta. âUnlike the present regime,
the BSP government did not change the names of districts, welfare
schemes, hospitals, parks and memorials,â Ms. Mayawati said.

In a strong attack on the Samajwadi Party president and her bete noire,
Ms. Mayawati said: âMulayam Singh Yadav and his âsamajâ should express
their gratitude not to Ram Manohar Lohia, but to Bhimrao Ambedkar, who
was born in a Dalit family, who was instrumental for including Article
340 in the Constitution, which enabled the OBCs to get quota benefits.â

While she rubbished all the welfare schemes launched by the Akhilesh
government and panned it for taking credit for schemes like the Yamuna
Expressway âwhich was launched by the BSP government,â Ms. Mayawatiâs
focus was on the law and order scenario. Kidnappings, murders, loot,
dacoity and robbery had reached a new high under the present regime.

Even as she exhorted her partymen to pull their socks up in the
âlikelihood of the LS poll being held before the scheduled time,â Ms.
Mayawati stressed that persons with criminal antecedents would not be
given ticket.

âIf
the financial situation of farmers and small traders improves because
of FDI, we could welcome it in future but currently we do not support
it,â the BSP chief said. Accusing the government of âlackadaisicalâ
approach towards bringing back black money stashed away in foreign banks
and various scams, Ms. Mayawati asked her party workers to work towards
strengthening the organisation while warning them about designs of
opposition parties.

Mayawati on FDI in multi-brand retail and the UPA government

âIt looks as if Lok Sabha polls could be held earlier,â she said at the well-attended rally.

She attacked the governmentâs foreign and economic
policies, saying its âanti-peopleâ decisions have added to the woes of
the people including the deprived, SC/STs, minorities and farmers. Lucknow: On the sixth death anniversary of her mentor
Kanshi Ram, Mayawati is addressing lakhs of her supporters at a
rally at the Ambedkar Park in Lucknow. She began her speech with a
scathing attack on the state government headed by the Samajwadi Party
(SP).

Here are the highlights of her address:


At huge rally, Mayawati launches 2014 campaign for her party 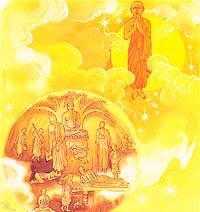 Verse 382. Even A Young Monk, If Devoted, Can Illuminate The Whole World

Surely that youthful bhikkhu who
strives in the Buddhaâs Teaching
illuminates all this world
as moon when free from clouds.

Explanation: This is true. If a young monk exerts himself
strenuously in the Teaching of the Buddha, he will certainly illuminate
the world as brilliantly as a moon emerging from behind a dark cloud
that hid it for a while.

Verse 382: A bhikkhu who, though young,
devotes himself to the Teaching of the Buddha lights up the world, as does the
moon freed from a cloud.

The Story of Samanera Sumana

While residing at the Pubbarama
monastery, the Buddha uttered Verse (382) of this book, with reference to
Samanera Sumana.

Samanera Sumana was a pupil of
Thera Anuruddha. Although he was only seven years old he was an arahat, endowed
with supernormal powers. Once, when his teacher Anuruddha was ill at a monastery
in a forest of the Himalayas, he fetched water from the Anotatta lake which was
five hundred yojanas away from the monastery. The journey was made not by land
but by air through his supernormal power. Later, Thera Anuruddha took Samanera
Sumana to the Buddha, who was then sojourning at Pubbarama, the monastery
donated by Visakha.

There, other young bhikkhus and
samaneras teased him by patting his head, or pulling his ears, nose and arms,
and jokingly asked him if he was not feeling bored. The Buddha saw them and
thought that he would make those young bhikkhus see the rare qualities of young
Samanera Sumana. So it was made known by the Buddha that he wanted some samanera
to get a jar of water from the Anotatta lake. The Venerable Ananda searched
among the bhikkhus and samaneras of the Pubbarama monastery, but there was none
who was able to undertake the job. Finally, the Venerable Ananda asked Samanera
Sumana who readily agreed to fetch water from the Anotatta lake. He took a big
golden jar front the monastery and soon brought the water from the Anotatta lake
for the Buddha. As before, he went to the Anotatta lake and came back by air
through his supernormal power.

At the congregation of the
bhikkhus in the evening, the bhikkhus told the Buddha about the wonderful trip
made by Samanera Sumana. To them the Buddha said, “Bhikkhus, one who
practises the Dhamma vigilantly and zealously is capable of attaining
supernormal powers, even though he is young.”

End of Chapter Twenty-five: The Bhikkhus