WordPress database error: [Table './sarvajan_ambedkar_org/wp_comments' is marked as crashed and should be repaired]
SELECT ID, COUNT( comment_ID ) AS ccount FROM wp_posts LEFT JOIN wp_comments ON ( comment_post_ID = ID AND comment_approved = '1') WHERE ID IN (2026) GROUP BY ID 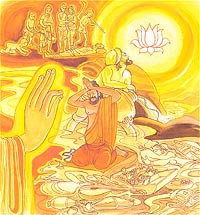 Verse 383. Be A Knower Of The Deathless

Explanation: Exert all you can and cut off the stream of existence.
Get rid of passion. Get to know the erosion of the condition things.
And, they become the knower of the uncreated - Nibbana.

Verse 383: O Brahmana, cut off the stream of
craving with diligence, and abandon sense desires. O Brahmana, perceiving the
cessation of the conditioned, be an arahat who realizes Nibbana, the
Unconditioned.

The Story of a Brahmin Who Had Great Faith

While residing at the Jetavana
monastery, the Buddha uttered Verse (383) of this book, with reference to a
brahmin, who showed extreme devotion to some bhikkhus.

Once, in Savatthi, there lived a
brahmin who became extremely devoted to the Buddha and his Teaching, after
hearing a discourse given by the Buddha. Every day, he invited the bhikkhus to
his house for alms-food. When the bhikkhus arrived at his house, he addressed
them as “arahats” and respectfully requested them to enter his house.
When thus addressed, the puthujjana bhikkhus and the arahats felt embarrassed
and they decided not to go to the brahmin’s house the next day.

When the brahmin found that the
bhikkhus did not come to his house again he felt unhappy. He went to the Buddha
and told him about the bhikkhus not coming to his house. The Buddha sent for
those bhikkhus and asked for explanation. The bhikkhus told the Buddha about the
brahmin addressing all of them as arahats. The Buddha then asked them whether
they felt any false pride and undue elation when they were thus addressed. The
bhikkhus answered in the negative. To them the Buddha said, “Bhikkhus,
if you don’t feel any false pride and undue elation when addressed as arahats,
you are not guilty of breaking any of the rules of discipline of the bhikkhus.
The fact is that the brahmin addressed you so because he was extremely devoted
to the arahats. So. my sons, you should strive hard to get rid of craving and
attain arahatship.”

WordPress database error: [Table './sarvajan_ambedkar_org/wp_comments' is marked as crashed and should be repaired]
SELECT COUNT(comment_ID) FROM wp_comments WHERE comment_post_ID = 2026 AND comment_approved = '1';

WordPress database error: [Table './sarvajan_ambedkar_org/wp_comments' is marked as crashed and should be repaired]
SELECT COUNT(*) FROM wp_comments WHERE comment_post_ID = '2026' AND comment_approved = '1'