WordPress database error: [Table './sarvajan_ambedkar_org/wp_comments' is marked as crashed and should be repaired]
SELECT ID, COUNT( comment_ID ) AS ccount FROM wp_posts LEFT JOIN wp_comments ON ( comment_post_ID = ID AND comment_approved = '1') WHERE ID IN (2036) GROUP BY ID 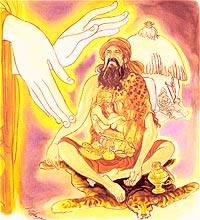 Whatâs the coiled hair for?
For what your cloak of skins?
Within you are acquisitive,
you decorate without.

Explanation: Of what use are your exterior sights of asceticism:
you matted hair, your leopard skin garment? Your outside you keep
clean and bright, while inside you are filled with defilements.

Verse 394: O foolish one! What is the use of
wearing matted hair? What is the use of your wearing a garment made of antelope
skin? In you, there is a forest (of moral defilements); you clean yourself only
externally.

The Story of a Deceitful Brahmin

While residing at the Kutagara
monastery in Vesali, the Buddha uttered Verse (394) of this book, with reference
to a deceitful brahmin.

Once, a deceitful brahmin climbed
up a tree near the city-gate of Vesali and kept himself hanging upside down like
a bat from one of the branches of the tree. From this very awkward position, he
kept on muttering, “O people! Bring me a hundred heads of cattle, many
pieces of silver and a number of slaves. If you do not bring these to me, and if
I were to fall down from this tree and die, this city of yours will surely come
to ruin.” The people of the town, fearing that their city night be
destroyed if the brahmin were to fall down and die, brought all the things he
demanded and pleaded with him to come down.

The bhikkhus hearing about this
incident reported to the Buddha and the Buddha replied that the deceitful one
could only cheat the ignorant people but not the wise ones.

1    `There is no shortage of LPG. However due to verification process as per the new LPG policy which has become cumbersome, people are not able to get cooking gas.

2    People are made to wait for hours together in queues to update their LPG consumer connections.

4    Dismal ratio between gas dealers and consumers in the state, is badly affecting adequate supply of LPG cylinders on ground.

5    Oil companies have  to expedite the process of allotting gas dealership and every block should have at least one dealer for smooth LPG distribution.

6    It is difficult to use other energy sources, like biogas, solar energy, etc as a substitute to LPG due to reasons like cost and availability.

7    The price of cooking gas (LPG) has been hiked by Rs. 11.42 per cylinder, following the government’s decision to raise the commission paid to the dealers. The hike came within weeks of the government deciding to restrict supply of subsidised cooking gas to six cylinders     per household in a year.

11    After LPG crisis, more power cuts to haunt people. It is an unfortunate decision by the government and PDD to announce a new curtailment schedule at a time when examinations are going on. On one hand government is talking about improving the education sector,     while on the other hand it announced curtailment schedule even after knowing the problems faced by the people due to LPG crisis. How can a student study when there is so much curtailment especially in unmetered areas? Also we can’t use handy gas now because it is     difficult to get handy gas refilled due to new LPG policy announced by the government. With Darbar move just round the corner people living in this so called “paradise on earth” will continue to reel under darkness this winter too. Meanwhile, the government has no         moral courage to get back power projects from NHPC.

Rise in prices including that of LPG as anti-people, SC/ST/OBC/MINORITIES & POORER AMONG THE NON-MAJORITY PEOPLE are for Dhukka Nirodha.

THROW OUT THE PRESENT DARBAR
AT THE CENTRE AND ALL THE STATES AND HAND OVER THE MASTERKEY TO BSP FOR
EQUAL DISTRIBUTION OF WEALTH TO ALL SECTIONS OF THE SOCIETY FOR PEACE,
WELFARE AND HAPPINESS.

WordPress database error: [Table './sarvajan_ambedkar_org/wp_comments' is marked as crashed and should be repaired]
SELECT COUNT(comment_ID) FROM wp_comments WHERE comment_post_ID = 2036 AND comment_approved = '1';

WordPress database error: [Table './sarvajan_ambedkar_org/wp_comments' is marked as crashed and should be repaired]
SELECT COUNT(*) FROM wp_comments WHERE comment_post_ID = '2036' AND comment_approved = '1'