WordPress database error: [Table './sarvajan_ambedkar_org/wp_comments' is marked as crashed and should be repaired]
SELECT ID, COUNT( comment_ID ) AS ccount FROM wp_posts LEFT JOIN wp_comments ON ( comment_post_ID = ID AND comment_approved = '1') WHERE ID IN (2033) GROUP BY ID 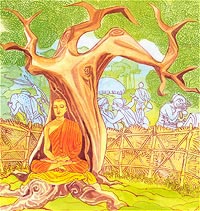 Verse 391. The Well-Restrained Is Truly A Brahmin

In whom there is no wrong-doing
by body, speech or mind,
in these three ways restrained,
that one I call a Brahmin True.

Explanation: If an individual is well guarded in body, speech
and in mind, and has done no wrong in these three areas, who is well
restrained, I call that person a true brahmana - the noble saint.

Verse 391: Him I call a brahmana who does no
evil in deed or word or thought, who is restrained in these three respects.

The Story of Theri Mahapajapati Gotami

While residing at the Jetavana
monastery, the Buddha uttered Verse (391) of this book, with reference to Theri
Mahapajapati Gotami.

When Prince Siddhattha returned
to Kapilavatthu after the attainment of Buddhahood, Mahapajapati Gotami went to
see the Buddha and requested that women should also be allowed to enter the
Buddhist Order as bhikkhunis; but the Buddha refused permission. Later, King
Suddhodana died after attaining arahatship. Then, while the Buddha was
sojourning at the Mahavana forest near Vesali, Mahapajapati, accompanied by five
hundred ladies, came on foot from Kapilavatthu to Vasali. They had already
shaven their heads and had put on the dyed robes. There, for a second time,
Mahapajapati requested the Buddha to accept women in the Buddhist Order. The
Venerable Ananda also interceded on her behalf. So, the Buddha complied, with
the proviso that Mahapajapati abides by eight special conditions (garudhammas).
Mahapajapati undertook to observe the garudhammas as required, and the Buddha
admitted her into the Order. Thus, Mahapajapati was the first to be admitted to
the Order of the Bhikkhunis. The other women were admitted to the Order after
her by the bhikkhus as instructed by the Buddha.

In course of time, it came to the
minds of some bhikkhunis that Mahapajapati Gotami had not been properly admitted
as a bhikkhuni because she did not have a preceptor; therefore, Mahapajapati
Gotami was not a true bhikkhuni. With this thought in their mind, they stopped
doing sabbath (uposatha) ceremonies and vassa (pavarana) ceremonies with her.
They went to the Buddha and posed the problem of Mahapajapati Gotami not having
been properly admitted to the Order of bhikkhunis as she had no preceptor. To
them the Buddha replied, “Why do you say so? I myself gave the eight
garudhammas to Mahapajapati and she had learnt and practised the garudhammas as
required by me. I myself am her preceptor and it is quite wrong for you to say
that she has no preceptor. You should harbour no doubt whatsoever about an
arahat.”

Majority People Chamber of Commerce and Industry (MPCCI), entrepreneurs from across the country raised the slogan of Fight class/caste with capital’ and welcomed partnerships with big corporates and industries along with financial assistance and reservation.

People who have been long deprived of economic and social rights  need reservation to grow.They need ample business opportunities to prove their merit. In this regard, allowing FDI in all the countries will open a number of avenues for people belonging to scheduled castes. tribes,Other Backward Castes, Minoritires and the poorer among the Non-Majority people too.”

The modern trade system offered equal opportunities to all depending on  their skills contrary to the traditional trade system where all powers and money were vested in the hands of one Non-Majority Caste. The old system promotes casteism while the new system will allow everyone to grow.

All the members of MPCCI must work hard to create business opportunities for its members and provide a national platform for knowledge exchange.

Do Majority People, the most marginalised section of society, figure in the narrative of biodiversity conservation? Are they excluded like it is in the contemporary hierarchical  Non-Majority society? What is their status vis- a-vis tribals and traditional forest-dwellers whose rights have been protected by the recent Forest Right Act ?

A side event organised at a corner of the ongoing COP-11 here on Monday by the National Campaign on Majority People Human Rights (NCMPHR) threw up interesting facets of the issue.

With the Biological Diversity Conservation Act of 2002 weighing everything in terms of economic value and allowing destruction of biodiversity for economic purposes, the Majority Peoplesâ position on biodiversity conservation has become legally questionable.

The current debates on biodiversity conservation could be considered as market debate within the âunequal developmentâ paradigm.

âHence, the Majority People position has to challenge both biodiversity conservation and development anglesâ.
The position of tribals was comparatively better after the Forest Rights Act, but whether they enjoyed the fruits of law was debatable.

Looking at the impact of climate change and biodiversity loss on such communities, It is  brought out how Majority People constituting more than 85 per cent of the population and living in vulnerable areas, landless and dependent on natural resources would be the worst-affected.

WordPress database error: [Table './sarvajan_ambedkar_org/wp_comments' is marked as crashed and should be repaired]
SELECT COUNT(comment_ID) FROM wp_comments WHERE comment_post_ID = 2033 AND comment_approved = '1';

WordPress database error: [Table './sarvajan_ambedkar_org/wp_comments' is marked as crashed and should be repaired]
SELECT COUNT(*) FROM wp_comments WHERE comment_post_ID = '2033' AND comment_approved = '1'