TIPITAKA from FREE ONLINE  eNÄlÄndÄ Research and Practice UNIVERSITY through http://sarvajan.ambedkar.org-Dhammapada Verse 386 Annatarabrahmana
Vatthu-Who Is Contemplative And Pure Is A Brahmin 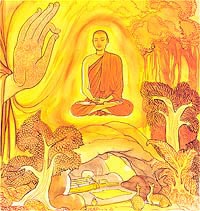 Verse 386. Who Is Contemplative And Pure Is A Brahmin

Seated stainless, concentrated,
whoâs work is done, whoâs free of taints,
having attained the highest aim,
that one I call a Brahmin True.

Explanation: He is given to concentrated contemplation. He
is free of all blemishes - the dust that defiles a being. He sits
in solitude. All his spiritual tasks and obligations are done. He
has reached the highest goal. That person I describe as a brahmana.

Verse 386: Him I call a brahmana, who dwells
in seclusion practising Tranquility and Insight Meditation and is free from
taints (of moral defilements); who has performed his duties, and is free from
moral intoxicants (asavas) and has reached the highest goal (arahatship).

The Story of a Certain Brahmin

While residing at the Jetavana
monastery, the Buddha uttered Verse (386) of this book, with reference to a
brahmin.

One day, a brahmin thought to
himself, “Gotama Buddha calls his disciples ‘brahmana’. I also am a brahmin
by caste. Shouldn’t I also be called a brahmana?” So thinking, he went to
the Buddha and posed this question. To him the Buddha replied, “I do not
call one a brahmana simply because of his caste; I only call him a brahmana, who
has attained arahatship.”