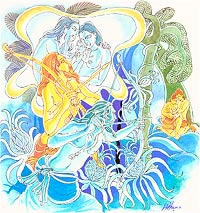 All tremble at force,
dear is life to all.
Likening others to oneself
kill not nor cause to kill.

Explanation: All are frightened of being hurt or any threat to
oneâs life. To all life is dear. Seeing that others feel the same way as
oneself, equating others to oneself, refrain from harming or killing.

All
the gods of the Three Worlds have the first five spiritual powers to some
degree. Ghosts and spirits also have some small degree of spiritual power.
Those of non-Buddhist religions who cultivate can at the very most only attain
the first five. Only one whose enlightenment is certified achieves the sixth,
the extinction of outflows.

On
the level of the Arhat, the powers are still small. If an Arhat wishes to use
one of them, he must first make a point of making himself still, sitting
quietly for a while. Only then can he find out what he wishes to know.
Bodhisattvas, however, without wishing, without acting, naturally and at every
instant have great spiritual power without measure or limit. This is the
inconceivably wonderful fruit of the Mahayana.

1)
spiritual power of the heavenly eye

“With
the heavenly eye one can see the gods and observe all their activities.”
(AS 5)

“A
power that enables one to see an entire world system of a billion worlds as
clearly as an apple held in the palm. The Buddha’s disciple, the Venerable
Aniruddha, was foremost in this power.” (SPV 26)

“With
it you can see what is inside your own body, all the living beings within you
that you must vow to save. Although scientists cannot count the number of
living beings inside the human body, if you have the heavenly eye you can see
them, count them, and take them across… You can even count up the grains of
rice you eat. You can see how your meal is being digested in your
stomach…” (DFS IV 808-809)

2)
spiritual power of the heavenly ear

“With
the heavenly ear one can hear the speech and sound of the gods.” (AS 5)

“A
power by means of which one can hear all the sounds in a world system of a
billion worlds, not merely the sounds in the heavens.” (SPV 27)

“With
the heavenly ear, not only can you hear what the gods are saying, but you can
hear all of the little ‘bugs’ inside of you calling out. You can hear the germs
talking, the flowers talking, and the trees talking. Some people say that when
you go pick a flower it is afraid and lets out a scream? That’s right. ‘Oh no!
This is it! It’s all over. I’m going to die!!!’ When you start hearing all
these sounds, though, you shouldn’t dislike it. You can choose not to listen to
them, too. It’s up to you. The heavenly eye sees more clearly than an x-ray
machine, and the heavenly ear hears more clearly than sonar equipment.”
(DFS IV 809)

3)
spiritual power of the knowledge of past lives

“A
power that enables one to know past events, both good and bad.” (SPV 27)

A
Shramana asked: “What are the causes and conditions by which one comes to
know past lives and by which one’s understanding enables one to attain the
Way?”

The
Buddha said: “By purifying the mind and guarding the will, your
understanding can enable you to attain the Way. Just as when you polish a
mirror, the dust vanishes and brightness remains, so too, if you eliminate
desire and do not seek (for anything), you can then know past lives.” (S42
35)

4)
spiritual power of the knowledge of the minds of others

“A
power through which others’ thoughts are known before they are even
spoken.” (SPV 27)

5)
The powers derived from a spiritual basis

This
“refers to all kinds of powers of magical transformation. You can be
sitting in one place and at the same time go off to New York to play. You can
go take a look at things in L.A. It won’t take you one second to make your
return trip either…” (DFS VII 1296)

A
Bodhisattva who has this power:

can
move the great earth. He can make one body into

many
bodies, and many bodies into one body. He can

either
disappear or appear. He goes through stone

walls
and solid mountains as if they were space. In

empty
space he travels in full lotus, just like a bird

in
flight. He enters earth as if into water, and

treads
upon water as if it were earth. His body puts

forth
smoke and flames like an immense heap of fire.

He
further sends down rain just like a mighty cloud. The sun and moon in space
have tremendous, awesome

might,
yet he can touch and rub them with his hand. His body is free and at ease, even
up to the world of

6)
The spiritual power from the elimination of outflows

Outflows
refer to all our faults, especially ignorance and desire, which cause us to
expend energy outward as we seek pleasure in external sense-objects.

“To
be without outflows is to have no thoughts of greed, hate, stupidity, or sexual
desire. In general, once one gets rid of all one’s bad habits and faults, one
has no outflows. Outflows are like water running out of a leaky bottle; at the
stage of no outflows the leaks have been stopped up.” (AS 6)

Consider
a “teacup. Does it have any holes in it,

any
outflows? It has no outflows, of course, and so it can hold the tea… Would
you say that our bodies have outflows or not? Hah! Our bodies are bottomless
pits. You fill your body up today and tomorrow it all runs out… Obviously
one’s excrement and urine are outflows. They flow out, and we have practically
no control over it. Our bodies have nine orifices which constantly secrete
impure substances… But, these are very common, ordinary outflows and aren’t
that important. The greatest outflows are the ones you aren’t even aware of:
greed, hatred, stupidity, pride, and doubt… In general, outflows are none
other than our afflictions…” (DFS VII 1281-1285)

“‘What
can you do that isn’t an outflow?’ you ask.

“‘I’d
rather have outflows than cultivate,’ you say.

“If
that’s what you’d like, if it suits you to have outflows, then go ahead and
‘flow out’. Let’s see where you ‘flow out’ to. You could flow out and turn into
a pig, or a horse, or an ox, or flow out into the hells, into the path of
animals, or hungry ghosts. You pick your own path…” (DFS IV 808)

(NOTE:
Numerous corrections and
enhancements have been made under Shastra
tradition and “Fair Use” by an Anonymous Buddhist Monk Redactor (Compiler) of this
Online Buddhist Encyclopedia
Compilation)

Primary Original Source: The
Tripitaka Sutra, Shastra and Vinaya teachings
(as found in the
scripture storehouse of the Indian Sanskrit-Siddham, Chinese, Tibetan and
Japanese traditions of the Nalanda Tradition of ancient Nalanda University) of Shakyamuni
Buddha,
and his Arya Sagely Bodhisattva Bhikshu Monk and Upasaka disciples.

Nalanda Online University’s teachings are based
especially on the Dharma Flower Lotus Sutra, the Avatamsaka Sutra, the Shurangama Sutra, the Ksitigarbha Sutra, the Bhaisajya Guru Sutra, the Dharani Sutra, the Vajra Sutra, the Prajna Paramita Hridayam Sutra, the Guhyasamaja, the Kalachakra and their commentaries
(shastras) by the above Arya Tripitakacharya Dharma Masters.

At
Nalanda Online University we practice daily and introduce you to
(via downloadable multimedia MP3 audio and WMV video lectures) the teachings
and practices of the Five
Traditions transmitted by the Buddha Shakyamuni:

Compilation Sources for the Above
Material on the Teachings of the Buddha:

The
Dharma is a Priceless Jewel,
thus these research compilations
and audio and video teaching materials are
offered free-of-charge by this anonymous Buddhist Monk
for the Bodhi Resolve benefit of All Sentient Beings in the Universe…

…under a Creative Commons License.

The
rights to textual segments (”quoted, paraphrased, or excerpted”) of
the are owned by the author-publisher indicated in the brackets
next to each segment and are make available and commented on (under the
“shastra tradition”) under Fair Use. For rights regarding the
Buddhist “Encyclopaedia - Glossary - Dictionary” compilation as a
whole, please know that it is offered under this Creative Commons License.

This
Nalanda University site (www.Nalanda-University.com)
is redacted by an anonymous Buddhist monk
for the benefit of all living beings
so they may diligently (virya paramita) cultivate freely to
realize Bodhi enlightenment for the sake of all.

On the Buddha Shakyamuni’s Birthday 2007,
this free redaction is offered (received, upheld, read,
recited, studied, pondered, explained, and written out),
in accordance with the Lotus Saddharma Pundarika
Sutra
Chapter 19: “Merit and Virtue of a Dharma Master” as a
selfless offering to the Buddhas and Bodhisattva Sangha above to adorn the Pure Lands and
to liberate living beings suffering in samsara below
by compassionately helping them to plant good roots in this and their future
rebirths.

The merit is dedicated to anuttarasamyaksambodhi.

Sarva Mangalam.
May all be Auspicious.

Arya Bhikshu Shantidevaâs Bodhisattvacharyavatara
says:
Just as Manjushri works
To fulfill the aims of all limited beings
To the far reaches of space in the ten directions,
May my behavior become just like that.

May I too remain for that long,
Dispelling the sufferings of wandering
beings.

(Like Ananda says in the Shurangama
Sutra introduction to the Shurangama Mantra,
“And even could the nature of shunyata melt away, my vajra-like Supreme Resolve would still remain
unmoved.)

May
the teachings,
the sole medicine for the sufferings of wandering beings
And the source of all happiness,
Continue to endure for a very long time,
With material support and shows of respect.

From Wikipedia, the free encyclopedia

IddhipÄda (Pali; Skt. á¹ddhipÄda)
is a compound term composed of “power” or “potency” (iddhi; á¹ddhi)
and “base,” “basis” or “constituent” (pÄda).[1]
In Buddhism,
the “power” referred to by this compound term is a group of spiritual
or psychic powers that include teleportation
and other forms of bodily transformation. Thus, this compound term is usually
translated along the lines of “base of power” or “base of
spiritual power.”[2]

Traditionally
the are
84,000 Dharma Doors - 84,000 ways to get Awakeness. Maybe so;
certainly
the Buddha taught a large number of practices that lead to
Awakeness.
This web page attempts to catalogue those found in the Pali Suttas
(DN, MN,
SN, AN, Ud & Sn 1). There are 3 sections:

Awakened
One Shows the Path to Attain Ultimate Bliss

COMPUTER
IS AN ENTERTAINMENT INSTRUMENT!

Using
such an instrument

The FREE ONLINE eNÄlÄndÄ Research And Practice UNIVERSITY has been
re-organized to function through the following
Schools
of Learning :

As the
Original NÄlandÄ University did not offer any Degree, so also the Free
e-NÄlandÄ
University.

Level I: Introduction to
Buddhism

Business Management in relation
to Public Policy and Development Studies;