Dhammapada Verse 140 Woeful States In
The Wake Of Evil Doing 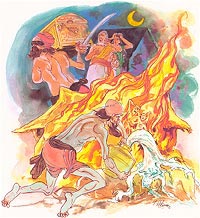 Verse
140. Woeful States In The Wake Of Evil Doing

Or oneâs houses burn
on raging conflagration,
at the bodyâs end, in hell
arises that unwise one.

Explanation: Or else, his houses will be burnt by fire and, upon
death, that person will be reborn in hell.

Mayawati
or Hatshepsut: Her place has to be shown

A handbag. A false beard.

Two seemingly innocuous objects which transform into
fearsome symbols, when they adorn the statues of Mayawati and Hatshepsut
respectively. These women statues have unleashed unprecedented amounts of
societal outrage. Is the cause for outrage the engravings themselves, or the
depicted demeanor, or is it the act of consecrating one’s own statue? The
answer would be all three reasons and more. The intensity of the backlash
alludes to the kind of transgressive power that Mayawati and Hatshepsut have
come to signify.

Several centuries separate these two women. One has an
oppressed heritage, the other was a royal. Both aspired for, obtained and
commanded power in the political arena. And both stood in opposition to known
ways of handling political power. Compelling parallels can be traced in the
stories of their power management, the most obvious one is that they went on to
mark their uniqueness in stone, for posterity. To focus on any one aspect of their
lives would be a dishonor to these two remarkable women. Here, I am contexting
the reaction to their statues for a precise purpose, that is, to illustrate two
forms of oppression: patriarchy and caste, and how they function in relation to
woman power.

Hatshepsut is among other things, a historical marker for
rupturing patriarchal supremacy, and likewise Mayawati is a contemporary marker
for cracking open the mantle of caste supremacy.

Caste is a tightly woven mesh of many oppressions,
including that of gender. Caste as a complex system of oppressive powers has
its origin and practice located exclusively in South Asia, and it can rarely be
illuminated effectively with idioms and metaphors from elsewhere. To understand
how oppression operates and to contest it, the anti-caste discourse draws
widely from the articulation of marginalized communities from all over the
world. But it aims to look for meanings, definitions and examples from within
the caste universe. Though separated by time, space and cultures, I still
chose Hatshepsut because the sub-context here is iconography as a memory-making
device for women’s history, and in this regard the parallel between these
two women is obvious. As John Berger, the art critic said;

âItâs as though across time, images, I mean it sounds
strange to say it, but images recognize each other. Or pay tribute to each
otherâ .

I am a science researcher and my profession shelters my
introverted nature. It suits the majority of scientists to not be visible as
persons and allow only their work to speak. Does this mean I am limited in my
appreciation of career choices that place women squarely in the public sphere
and the demands thereof? Unlike science, low visibility is not part of the
reward system for politicians. I am impressed that they work and deliver under
high visibility; I am also curiously fascinated that they are also the chief
arbiters of long term memory-making expenditure. In other words, the power to
execute secular iconography (including that of science) is part of their
profession’s power perks; they may ignore this aspect or dedicate energy to it.

The architectural palettes of Hatshepsut and Mayawati were
vast, in the latterâs case they include hospitals, memorials, highways, sports
complexes, rural infrastructure and city enhancements but the elites direct
their ire mainly towards the personal statues. This in turn points towards
other structures; caste and patriarchy. That power should never have been in
the possession of these two women can be grasped from the huge amounts of
anxiety their statues produced, documented as furious words and destructive actions.
The idea here is not to simply connect these two women leader’s personalities,
or study the way they governed, but to examine what they both famously inspired
ârevulsion, mammoth anger, the collective fear and outrage of the powers they
had displaced briefly, in their respective societies.

This takes us squarely to our understanding of iconography
as a means of perpetuating old orders. Representation of women as markers of
power, as agents of change or as knowledge producers is rarely encountered in
the iconography of patriarchal societies. Do we wonder about this? How many
women have challenged this primary means of long term memory-making in human
history? Or should we say memory-making processes in patriarchal history!

Did other queens rule as kings before Hatshepsut? Her
reign is not just a historical aberration- a sudden interruption in the
succession of male Pharaohs, but it is a record of what that change could imply
at the political level for the history of patriarchy. Because her rule did not
simply follow the blueprint laid out by her male predecessors but sharply
deviated from it. Her vision was not war and occupation, but trade and
prosperity, and her legacy, societal peace and architectural magnificence.
Legend goes that she effortlessly defanged patriarchy’s chief political
machinery, the military. Restlessness of the elites automatically followed.
Hatshepsut thus was an agent of change who deserved hatred from them, potent
enough to warrant her disappearance from the evidential records of history.

Long after her reign, her story was pieced together from
statues, images and inscriptions. All of them disfigured to some extent by her
male successors.

Egyptian female king, Hatshepsut, died, images and
inscriptions which recognized her as a king were defaced or destroyed. This
began the long process of forgetting that Egypt had had a woman who ruled as a
king. Female images of Hatsheput were also destroyed especially if they were
connected with her power or title as king.

Yet she lives on, her memory tantalizes us with alternate
possibilities of how societies may be governed under female leadership, under
truly radical women leaders.

A note in the Metropolitan Museum of Art
describes Hatshepsutâs statues thus:

“In her temple at Deir el-Bahri there were at least
ten over-life-sized kneeling statues of Hatshepsut.â

Does one imagine that someone else built it for her, after
her death? They were built during her reign. This ought to gently wake
up the critics of Mayawati’s statues, and there are many learned ones
-historians, feminists, opinion makers of all hues who go to town about her
megalomaniac acts in stone. They have very public and frantic spiritual
convulsions exclaiming ‘how can you build your own statues during your own
lifetime?’ They all seem to be in a deep slumber about radical womenâs
histories elsewhere.

Criticism of Mayawati’s ‘blasphemous’ act of consecrating
her own statues as a part of the pantheon of Dalit icons, always attempts to
separate it from the singular power she alone wielded to halt one of  the
world’s biggest invisibilising projects- erasure of the evidence of anti-caste
struggles. I must emphasize again, she alone commanded the power to give the
world the iconography of the centuries old anti-caste movements. Can one
imagine America without the positive iconography of the civil rights movement
and its leaders? The anti-caste movement has been fighting a much older battle
for human and civil rights of adivasis and dalitbhaujan for so many centuries
now. It is imperative for the dominant caste elites to keep this completely
hidden; the force of their need to retain the caste order far outweighs all the
oppressive power of white America’s racism. Now, Mayawati’s architectural
investments have blown the cover for good. A simple logic visually unfolds
itself to the world; to acknowledge the anti-caste movements and its leaders is
to acknowledge caste. To vilify the person who took up this massive corrective
to historical misrepresentation is but natural. Those monuments, those statues
are not just the heritage of the anti-caste movements, but they are in fact an
exposition of India’s moral, political and spiritual pretensions of being a
democratic, secular nation with a glorious past. It sculpts for the worldâ
caste. It delineates in tangible form the caste history of India. When the
struggle against caste is cast in stone, caste can no longer be a vaguely
explained abstraction to be restricted to little academic books and exclusive
conferences. Caste is now on the physical landscape, forcing national and
international conversations about how India functions as a society. It informs
one and all that the basic element of human interaction of people in the
subcontinent is the complete and abiding faith in the inequality of humans.
Racism is a term that is extremely inadequate to describe this form of human
behavior.

The budget for the monuments in Uttar Pradesh went through
the usual procedures of obtaining approval from the cabinet. If people in U.P
thought it was an outrageous, unwarranted expense it could have triggered mass
protests on the streets, it was not a project that happened in a clandestine
manner, it was out there for public scrutiny at all stages. Dalit intellectuals
and writers have ripped apart the false concern about misuse of public moneyâ
they simply want to know who foots the bill for all the iconography of the
political leaders and movements of the dominant castes? The basic fact is that
the BSP’s monument building projects could have been stopped at any time, if it
had violated any known law.

So who is outraged? The brahmanical elites with access to
TV studios and mainstream media. The same ones who are gleeful about public
money being squandered on ephemeral mega shows like the commonwealth games.

Then what is their outrage about? Is it directed against
gender or is it against caste?

How much of this overlaps with the outrage meted out to
Hatshepsutâs reign and statues and how much of it overlaps with the need to
continue the invisiblizing of the anti-caste struggles? What does it tell us
about how caste, patriarchy and class operate?

The outcry from the elites is to hanker after Mayawati’s
statues like it is a single mutation that needs quick elimination to restore us
back to a world of infinitely powerless dalit men and women.

They seem to say: She is a dalit woman, she ought to
reveal and bear the burden of the material deprivation of the most disempowered
person, at all times, even if the ‘miracle of democracy’ elected her as the
chief minister of a state as big as a country like Brazil. Her place has to
be shown.

The ‘war of words’ of the elite in the media is typical of
the method by which brahmanism or caste is kept alive and functional from the
very top of the caste order. They will not wield the sledgehammers themselves.
Vandalism will surely happen in the not too distant future. This will be followed
by theorization from the same elite’s brethren in the academia about lower
castes vs. dalits which results in the destruction of anti-caste monuments in
U.P.

This outrage is not only the moral high-ground occupied by
the elites but is in fact the fearful acknowledgment that not so often in human
history do we come across a woman with the power to command the engraving of
her own image in stone, which has the approval of an elected government. Here
is a dalit woman who did just that. Unlike most of the female statues scattered
around the world, from past to present times, neither are her statues tailored
to the male gaze nor are they signposts of male benevolence, these represent
her sense of history and were built to her own specifications. So there! Go on,
bring in the sledge hammers.

But just pause to think about what it is that one would
like to deface and destroy, the woman or her caste?

Images courtesy of Bhanu
Pratap Singh and the Internet.

Anu Ramdas is a computational biologist and
a volunteer at
Roundtable India and Savari.