The Only Hope of the 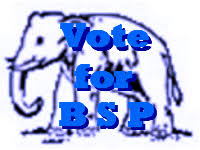 of BSP!
with Congress, other regional parties and BJP!


People are just fed up

capture the MASTER KEY !
For Mayawati!

Arun Khote, Chief Executive-PMARC in the national Seminar on ” SC/STs
& Media: Concerns and Lacuna”s organized by PMARC at Lucknow on 31st
July2010.

Speakers has raised the issue of accountability and
responsibility of mainstream media on social issues particular concerns
of socially excluded communities SCs, Tribals and women.,

Our
true media is people’s direct contact to awaken them with awareness for
their peace, welfare and happiness and educate them the true value of
vote and the buyers must be shown their place for capturing the MASTER
KEY to distribute the wealth of the country equally among all sections
of the society as enshrined in the constitution. create large number of
websites and video clips to publish them in You Tube etc.

How a victim âcasteâ the evil aside

Kagemanti (Mandya district): A three-year-long
journey replete with trials and tribulations has borne fruit for this
youngster who has come a long way from being a shepherd to successfully
staging a 10-hour-long epic drama on a magnificent set nestled atop a
hillock in the remote Kagemanti village in Mandya district.

The
Charvaka troupe finally unveiled its creation âArya Dravidaâ under the
open skies, on Wednesday evening, creating magic with its script, sound,
light and music.

This, for 27-year-old Girish Machalli, is the
beginning and the end of his tryst with the 16-acre land, which is
drawing people from far and wide â all in the name of theatre. Once a
wasteland with rocky structures where Machalli reared his sheep as a
child, it has been transformed into a land of pure delight â an artistâs
envy.

A tunnelled entrance chronicling the annals of
civilisation takes you backwards to the Stone Age â starting from the
present-day set-up symbolised by Parliament. From there on, you are
sucked into a world tormented by social evils, casteism and corruption,
depicted by around 150 first-time artistes on three massive stages
titled âHettavara Angalaâ, âNaganelaâ and âDravida Dhareâ.

Between
nightfall and pre-dawn, Machalli took his audience through a odyssey,
by successfully capturing the pathos of manâs evolution over 5,000
years, which he says has been woven together based on the âCause and
Effectâ theory.

The fruits of the hard work and the toil in
putting together the open theatre is, however, restricted to the five
days that Charvaka will stage the play. âMy rental agreement with the
owner of this land ends in June. I donât have the financial resources to
rent this land again. It may seem illogical, but I will have to forsake
this set after I complete the five shows. I want to dedicate the set to
the people of Mandya. It should stay as a monument, and I hope the
government will take interest in owning it up and not let it be torn
down,â says Machalli.

He
admits that it isnât easy to let go of a creation that especially
emerged from the struggles of his personal life. Machalli has raised and
spent Rs 1.12 crore in putting together the set, spread over six acres.
Recounting the opposition he faced from the parents of his beloved
Arundathi, Machalli says the discrimination he has encountered as a
person from a âlower casteâ, provoked him to get to the bottom of the
emergence of casteism.

âYou might call it madness. But now that
the show is unveiled, I donât mind talking about the real reason behind
âArya Dravidaâ. Arundathi has been the love of my life for the last nine
years. She has stood by my side, despite stiff opposition, in fact
aiding me through the research work for the play.

âShe has helped
me go through 3,000 to 4,000 reference material. When our love wasnât
accepted, I was struck by a madness to deal with this evil called
casteism.

The play, I hope, will spread the social message. But I
am now drained of finances. I know that I cannot sustain more shows on
this set. But with her by my side, I guess I can now move on,â he says,
adding that he would stage âArya Dravidaâ on other platforms.

Now we have 1st,2nd,3rd,4th rate athmas and the untouchables have no athmas. So every harm is done to them. Buddha never believed in any athma. He said all are equal. It is high time that people practice equality and become awakened ones with awareness for peace, welfare and happiness to attain eternal bliss as final goal.

Schedule for the General Elections to the Legislative Assembly of
Karnataka

Counting 08/May/2013
The term of the Legislative Assembly of Karnataka will expire on
03.6.2013. By virtue of its powers, duties and functions under Article 324 read with
Article 172

Election
Commission of India on Wednesday announced a single-phase poll in
Karnataka to be held on May 5. Counting will take place on May 8. The
term of the Karnataka assembly ends on June 3.

Announcing
the dates, Chief Election Commissioner VS Sampath said that Karnataka
will go for a single-phase assembly election May 5.

CEC Sampath said the counting of votes will take place May 8. Over 4.18 crore voters eligible to vote for 224-member assembly.

“Election
officials have already held consultations with state authorities and
met various political parties in the state during their visit to
Karnataka,” the CEC said.

JDS having an “covert” understanding with both BJP and RSS

BJP,
seems to be in disarray ever since former CM and Lingayat strongman B S
Yeddyurappa, who was asked to step down in 2011 in the wake of
corruption charges, parted ways and formed his own party. There has been
a steady erosion in the BJP’s votebase, as was evident from the
drubbing it got in the latest urban body elections.

The
Congress goes into the polls with an edge,because of the absence of BSP and the ELEPHANT Symbol not allotted to any candidate having finished way ahead of
BJP in the recently concluded urban local body elections in the state.
While the BJP’s tally shrank to 907 seats, N

Now with the tie up of SDPI and other small parties BSP combine will emerge as winners.

Our company, Leadtech, provides Political
Consulting, Political Survey, Opinion Poll, Exit Poll, Constituency
Profiling, Election Management and Political Campaingning for lok Sabha
Elections, Assembly Elections, Legislative Elections. We also Provide Voter
Relationship Management (VRM) software which contains all minute level
details of the study in one place. We have a varied clientbase
consisting of Political parties as well as individual MPâs, MLAâs and
aspirants. Instead of promising a hypothetical winning formula we equip
our clients with tools and services to manage their day to day
activities and help them in thorough and meticulous preparation for
elections. This approach enables them to get a crystal clear picture of
their own strengths to be consolidated further and weaknesses to be
improved upon.

Team: Our
team consists of graduates and post-graduates from IIT Bombay for the
software development, and analytical work, post-graduates and PhDs. to
manage the political, social and economic research work, post graduates
from leading colleges of MCA to manage the database collected from the
field, and data collection is done by the the people graduated from
leading institutes of Mass Communication and Political Science. We
have already served more than 1500 clients that include national
parties, individual candidates and regional parties in almost whole of
India. Mainly in states including Uttranchal, Punjab, UP, Gujarat,
Delhi, Maharashtra, Jharkhand, Assam, Himachal Pradesh, Karnataka,
J&K, Goa, Haryana, Rajasthan, MP, Chattisgarh, West Bengal, Bihar,
Assam, Meghalaya. We have done our research for Assembly Elections, Lok
Sabha Elections, Municipal Corporation Elections.

Methodology: A field research will be carried out in the constituency at the Polling Booth level.

The questionnaire will focus on the following parameters:

1. Developmental aspects: There are two key points where we focus our study on this heading

Ã¼ Assessment of satisfaction level of the constituents from their present MP/MLA.

Ã¼ Mapping of preferences of voters need from their present state and central Govt .

Ã¼ Comparison between present and previous state govt as well as central govt.

2. Image of the Leaders.

Ã¼ About leaderâs behavior with the common people

Ã¼ Whom constituents admire and prefer most from each party

3. Image of the Parties.

Ã¼ Most active party in the local area, state and center

Ã¼ Most promising party in the local area, state and center

Ã¼ Party Preference for next election

Ã¼ Worst policy made by the previous govt which can be an issue in the election.

Ã¼ At present, public preference about all given candidates

Ã¼ Whom voter thinks best suitable candidate for their benefits

Ã¼ Who is most reliable candidate

Ã¼ Feedback about all the candidates will be managed booths wise

Ã¼ What
is their opinion about the big issues like reservation, mandir-mastjid,
Price hike of daily use commodities, unemployment etc.

Ã¼ Arranging the data base of party worker at block and vidhan sabha level.

Ã¼ Approximate no of people of different religion

Ã¼ Strategy suitable according to the social engineering

9.
Due Delimitation there is major change in the demography of the
constituency so we make adjustments of the booths and wâll assess our
position where we stand in new geographical location.

Analysis:
The raw data from the field is compiled and a detailed research to
correlate various factors will be conducted with respect to past
election results. A comprehensive analysis will be carried out and focus
areas will be shortlisted to be taken up further. This analysis will
divide the booths in four groups, i.e., strong booths, weak booths,
threatened booths, and opportune booths. A comparison between the
strength of the individual vis a vis strength of the parties will also
be done. In
addition to the above analysis, the data gathered will be managed in
software developed by Leadtech. This will enable the client to view the
data collected through a user friendly graphical interface and come up
with his own analysis and strategies.

Important points to be noted which can be done after this project:

Ã The data collected would be very precious during election

o To manage the rally and party workers meetings, we can call our party workers with the help of phone numbers collected during survey which would be in database management software called âVoter Information Management Systemâ alias VIMS

o Campaign management would be very easy during crucial period of elections since every detail is well managed in the software.

o You
can open a call center before 3 months of election to start the
campaign (voter call center file attached here, explaining everything in
detail).

Ã The
software would be installed in the party office so that it may solve
various purposes to manage day to day business of the leader.

Ã We
can also start E-CAMPAIGN as soon as possible with the help of emails,
websites, blogs and SMSes to influence those who are opinion makers.

In case of any clarifications, please feel free to contact us.

Call Us to get a quote and Servies we can Offer

CEC must publish OPEN SOURCE CODE of EVM & train Booth representatives of all parties on the same and explain the trust worthiness of EVMs.
2. NATIONAL FLOWER symbol allotted to BJP must be frozen as it is ruling Karnataka along with CONGRESS HAND symbol as they mark the religious symbols such as astrologers palms and sacred hand of Islam.
3. Because of the above reasons and gods sitting or standing on LOTUS they must be draped along with their leaders ststues as it was done in UP Assembly Elections for LEVEL PLAYING GROUND

20/3/2013 Election commission announced
that the Karnataka will go for a single-phase state assembly elections
on May 5th and counting of votes will take place on May 8th 2013.